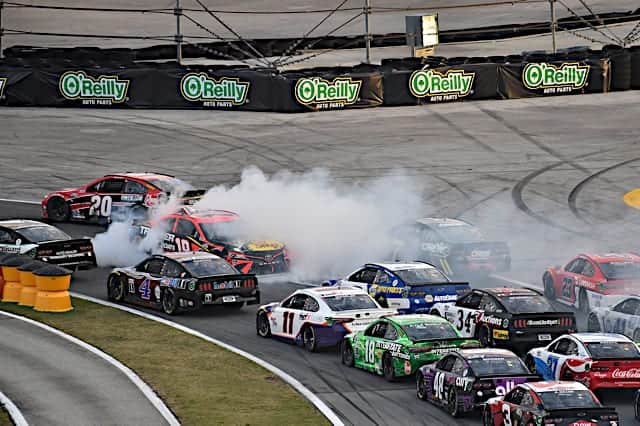 With seven road courses on the NASCAR Cup Series schedule this year (six more after this past weekend), there’ll be plenty more opportunities for surprise winners, rain tires and the all-around madness that comes with road course racing.

But due to the high volume of cautions and lengthy periods said stoppages take, would instituting local cautions be a good idea for NASCAR to explore?

Ty Gibbs made NASCAR history on Saturday night, becoming the sixth driver ever to win in their NASCAR Xfinity Series debut (first without any national series starts).

Should the current Cup lineup at Joe Gibbs Racing have any reason to worry about the youngster’s predicted rapid ascension to the top level?

Q:  Caution periods were so long this past weekend across all three national series. They got a little better as the weekend improved, but wouldn’t local yellows speed up the process? It works for all other motorsports series. – Logan P., Meridian, ID

A: Before the Camping World Truck Series race Friday night became a meme-able event due to its record-breaking length, three overtimes and memorable radio chatter, the scheduled 44-lap event (extended to 51) was marred by cautions. A lot of ’em. And a lot of time during the caution periods for keyboard warriors (myself included) to hypothesize how to speed things up.

Is it just me or does it feel like a LOT of the race has been run under caution tonight? ⚠️ #NASCAR

Local yellows
No stage breaks
No caution for rain, leave it up to teams

Has anyone told NASCAR about local yellows? I love that they’re all aboard the road course train but their oval caution strategy is really frustrating on road courses

Virtually every racing series that I know of implements local yellows on road courses. It speeds up the cleaning process, allows the flow of the race to remain largely unchanged and is widely accepted.

So how about NASCAR adopting the practice? NASCAR Senior VP of Competition Scott Miller, on SiriusXM NASCAR Radio’s “The Morning Drive,” explained why they don’t utilize local yellows.

“We will give a competitor an opportunity to get going again unless he’s in a super dangerous spot with cars coming at him,” Miller said. “We’ll give them an opportunity to get going again. We’ll wait as long as we can, but we typically don’t throw a full-course caution unless we know we’re going to have to dispatch equipment to either pick up debris, clean up oil or pull a car out of the tire barriers.”

“Under no circumstance are we going to have a local yellow with our equipment and our personnel out on the track. Local yellows (are) something that we can talk about, but honestly, concept(-wise), it is good, but in practice, I don’t really think that it keeps us from throwing the full-course caution hardly ever.”

As Dustin Long of NBC Sports pointed out, cautions were up this year compared to last year at the Daytona International Speedway road course, by nine to be specific, across all three national series. With not much of the NASCAR Cup Series field having experience at Road America and the Indianapolis Motor Speedway road course and no drivers in all three series having any at Circuit of the Americas, one would expect cautions to increase, if anything, at those specific tracks.

Road America is over four miles and COTA is just under 3.5. Lap times while green are north of a minute and under caution will sail north of three-four minutes. While I see Miller’s point, something may need to be done to speed things up. Cutting the course sounds like a simple option (while under yellow only), but time will tell if the sanctioning body decides to implement any fixes.

Q: Ty Gibbs impressed the hell out of me on Saturday. Does the current Joe Gibbs Racing driver lineup in Cup have any reason to think Gibbs will replace one of them in the near future, or will it still be awhile before he’s in Cup? – Peter B., Harrisburg, PA

A: I agree, Peter. I think Ty Gibbs impressed everybody and their mother this weekend. Whenever you can put yourself in the same sentence as some Hall of Famers, you’re doing something right.

• Third youngest winner in series history behind Logano and Elliott

But let’s all take a deep breath, relax and look at the facts here.

Nobody is going anywhere anytime soon.

Even with Gibbs showing insane potential (and a likely shoo-in to win the ARCA Menards Series championship this season) and Harrison Burton primed for another multiple-win season in Xfinity this year, there just isn’t room for them in Cup in the next few years.

Barring a Carl Edwards-esque retirement and Daniel Suarez-esque premature promotion, I don’t see a realistic path to Cup with JGR for either driver until 2024 at the earliest. That’s not to say 23XI Racing won’t expand to multiple cars and perhaps make a landing spot for someone like Gibbs or Burton. Or even Gaunt Brothers Racing, who has aspirations of being back full-time in 2022 when the NextGen car debuts.

Ty Gibbs will be a Cup Series driver (and winner) one day. So will Burton. Heck, maybe even Brandon Jones (although I’m hesitant to pin him as a future Cup Series winner). But they just won’t be doing so with the mothership anytime soon.

Yea it is Kurt Busch

I wouldn’t adopt local cautions in NASCAR because the slow down of the cars will always be argued. Also another way to fix a race.
It would dangerous for sure. Have you have seen the Keystone Kops try to put out a fire? It looks like a Chin Fir Dri !

I attended the SVRA/Trans Am weekend at Sebring instead of going to the Daytona crash fest. 36 full size cars in T/A , local cautions, few incidents. Great show. Local cautions work if drivers keep there heads out of their b@#$s.