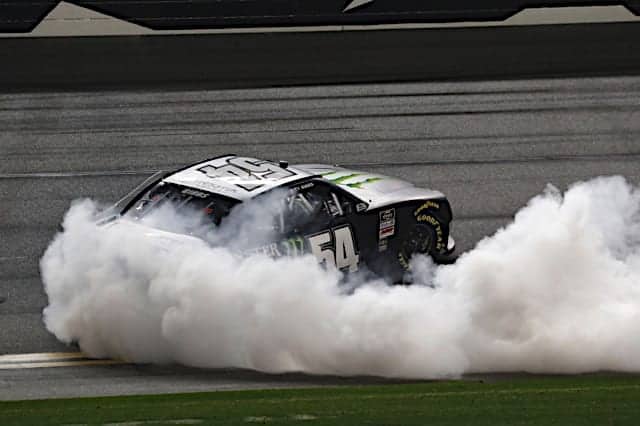 Last weekend, the Daytona International Speedway road course had a lot of interesting storylines. Perhaps the biggest occurred during the NASCAR Xfinity Series event when 18-year-old Ty Gibbs took the checkered flag in his first career start in the series.

Gibbs’ early success is not a fluke. He has dominated the ARCA Menards Series in recent years, winning eight of his 28 career starts in the series and having just four finishes outside of the top 10. The numbers show that Gibbs is the next big driver for Joe Gibbs Racing (JGR) and he isn’t going anywhere.

With the Gibbs name and his grandfather and father having key roles in the organization, Gibbs is going to remain at JGR for the long term. That led many folks to speculate what his future will look like two or three years down the road.

Is it even possible that Kyle Busch‘s tenure in the No. 18 is vulnerable? When looking at the future of the team, Denny Hamlin just signed an extension for the organization, as did Martin Truex Jr., although Truex’s contract runs through at least 2022. Meanwhile, Busch’s last contract extension was announced in 2019. With the success Christopher Bell has had in his career and his early success in the No. 20 car, it’s hard to envision Bell would leave the organization any time soon. JGR has a number of Xfinity Series drivers that could potentially move to Cup in the next couple of years. Don’t forget John Hunter Nemechek, who has NASCAR Cup Series experience and is now in the Toyota family with Kyle Busch Motorsports in the Truck Series.

So that begs the question. Did Saturday’s (Feb. 20) win at the Daytona Road Course make Busch’s future at JGR vulnerable? Vito Pugliese and Mark Kristl debate.

As Ty Gibbs was sailing it off into turn 1 through the grass and dirt, en route to his first career win in the NASCAR Xfinity Series – in his first start in the series – Saturday evening at the Daytona road course, my first thought was, “Bell better get his resume tightened up.”

Well, Bell shut my ass up about 24 hours later, but with Gibbs’ performance in his first Xfinity Series start – and against some pretty experienced road course drivers in the field – it did get me wondering who might be the most vulnerable driver with Gibbs on his way up.

I know, it flies in the face of anything lucid and coherent. One of the greatest drivers in the history of American motorsports – that’s not hyperbole, Kyle is that good – replaced by the guy that looks like a kid that mows lawns in the neighborhood. But it would not be unprecedented if he ended up being the one drawing a short straw once the team owner’s grandson is ready to make the jump, and there’s only four cars available.

Remember all the hand-wringing and head-scratching that happened when Matt Kenseth wasn’t retained, and Erik Jones replaced him in the No. 20 at JGR? This wouldn’t be that far removed from a similar scenario. Both Kenseth and Busch are championship-winning drivers, plus Kenseth had two Daytona 500 wins and was a bit easier to work with too. After over a decade together, might M&M’s be looking for a different approach for their motorsports marketing? Gibbs seems like he’d fit in nicely with their marketing and merchandising demo. And he’s probably at the lower end of the salary band too.

It seemed a bit odd that the crew chief who was finally able to earn a Cup championship with Busch in 2015 after missing half the season, and again in 2019, would essentially request a trade, right after the conclusion of a challenging 2020 season. Adam Stevens and some key personnel moved over to the No. 20 with Bell, and Ben Beshore assumed crew chief duties for Busch. Ostensibly, it has seemed to be so far so good with Busch winning the Clash on the road course at Daytona, and Bell winning the points-paying race there. It is still a bit shocking given the timing, success, and abruptness of the decision without intervention from within JGR, and was kept relatively quiet over the holidays.

Thinking back, the last time a crew chief and driver combination this effective was split up would be when Chad Knaus and Jimmie Johnson … uh oh.

The driver dynamic at Joe Gibbs Racing for the last several years has been more veteran drivers and one young upstart. From Joey Logano, to Erik Jones, and now Bell, Ty Gibbs seems like he would fit into the role perfectly. I’m not saying that it should be next year, but perhaps 2023? Busch’s contract is believed to run through 2022, and Gibbs would probably want his grandson to have at least a couple of years in the Xfinity Series full time to get accustomed to the cars, duration, and style of racing he would be jumping into. Keep in mind there is a new car coming into the series next year and everyone is going to be working with a clean slate. Having learned the lesson of not advancing a driver too quickly into the Cup Series as they did with Logano in 2009, they’re not going to make the same mistake twice.

However, if things start to go south with the No. 18 team and he burns another bridge with a tenured crew chief at Joe Gibbs Racing (which is effectively the Toyota factory team), then maybe that conversation would start to gather momentum. But if Busch rebounds and rolls into Phoenix with a shot at a third title in six seasons, then I’ll have to shut up once more. – Vito Pugliese

Kyle Busch is One of the Greats

Ty Gibbs winning in his Xfinity Series debut surprised me to an extent, but I knew he is incredibly talented. However, Gibbs’ victory does not affect Busch’s status with Joe Gibbs Racing.

Gibbs is only 18 years old and is running full-time in ARCA and part-time in the Xfinity Series this year. He still has a few years before he will be ready to compete full-time in the Cup Series. As a result, his performance on the Daytona road course last Saturday (Feb. 20) does not affect any of the Joe Gibbs Racing drivers’ futures. Specifically, Busch’s spot in the No. 18 Toyota is secure. Why would Joe Gibbs replace him? Busch is one of the all-time greats in NASCAR history.

For the first time since 2014, Busch failed to win at least two races with only one victory last year. He still finished eighth in the championship standings. Busch entered last year as the defending Cup Series champion. Due to the COVID-19 protocols instituted by NASCAR, which negated practice and qualifying once the Cup Series returned from its hiatus, Busch clearly was affected.

Busch won the weather-delayed playoff race at Texas Motor Speedway, but he finished runner-up three times once NASCAR competition resumed after the pandemic outbreak. He led more than 100 laps at both Bristol Motor Speedway races, yet failed to reach victory lane. So even though last year was his worst year since 2014, Busch still showcased he can pilot a Cup Series car.

Joe Gibbs Racing attempted to rectify Busch’s struggles from last year with a crew chief. After he claimed his two-time Cup Series championship-winning crew chief Adam Stevens quit on him, Busch wheeled his No. 18 to victory in the exhibition Busch Clash at the Daytona Road Course. New crew chief Ben Beshore already made a difference for Busch.

Two points races in this Cup Series season, Busch is 17th in the championship standings. Yet his results are not indicative of his performance. Busch accrued two stage points in the second stage of the Daytona 500 but finished 14th due to a last-lap fiery wreck.

In the most recent race at the Daytona road course, Busch was in 10th place at the end of the second stage. However, he ultimately finished one lap down in 35th place.

Now the Cup Series heads to Homestead-Miami Speedway. Busch was been successful there, winning at the 1.5-mile track in all three main NASCAR series, including twice in the Cup Series, complete with five top fives and nine top 10s in 16 Cup starts.

The Cup Series is racing seven times on road courses this year, including the completed race at the Daytona road course. Although Busch is not regarded as a road course ace, he has a combined four wins, 11 top fives, and 19 top 10s in 35 Cup road course starts.

Nashville Superspeedway is a new course on the Cup Series schedule this year. In 10 Xfinity Series starts there, Busch has one win, four top fives, five top 10s, and he has led laps in seven of those races. Busch’s experience there will benefit him when the Cup Series races at the 1.333-mile track.

Busch has 57 career Cup Series wins; 10th most all-time. Furthermore, since he started racing full-time in 2005, he has the second-most wins, behind only recently retired seven-time champion Jimmie Johnson. Additionally, Busch is the winningest driver in the Xfinity Series and NASCAR Camping World Truck Series. Those wins help Joe Gibbs Racing and TRD. Busch’s future is not in jeopardy. – Mark Kristl

So many wild hypotheticals, this is really stupid. Two races in and KFB is toast. Good grief.

A fun barstool debate, but way too early. So much could happen.

23XI will have an expanded fleet by then, and another team will be a Toyota team by then.

Adding to the random guessing, it would be more likely Truex leaves as he continues to decline without Pearn or Denny (we don’t know his extension length) moves over to his own team.

One thing I feel confident in is that Ty will only be in a Gibbs car and not be farmed to any satellite for a “gap year”.

Why not throw Truex’s name into the mix? He didn’t do any better than Kyle in 2020 and has a smaller fan base. Personally, I’d rather see JGR get rid of Hamlin, but apparently, his sponsorship with FedEx is solid, and that’s all that matters anymore. In the meantime, Toyota will continue to lose promising drivers to Chevy and Ford while they stick with 5 cars and potentially waste money with the #23 experiment. Interesting also that they lost one of their best lower-series crew chiefs when Rudy Fugle went to HMS as a Cup crew chief for the #24. HMS, after struggling for a few years, now has one of the youngest stables of any team including the defending Cup Champion, plus the only driver to equal the hype of Bubba Wallace in Kyle Larson. Only difference is that Larson will probably succeed.

Why does the media like to stir the shit kettle. I believe yall would loose your jobs before kyle looses his seat. Him and Gibbs have a agreement only thing not set in stone is sponsor that he finishes his career at JGR they got trucks for KBM to get them ready for tough schedules xfinity jgr for now then Gibbs in cup. Hamlin will be the first one out 1. Casue bubba won’t live up to Jordan standard so Hamlin will end up driving, MJ won’t be around long probably as long or shorter then baseball stint and 2 denny is the oldest gibbs will Kenseth him for younger driver