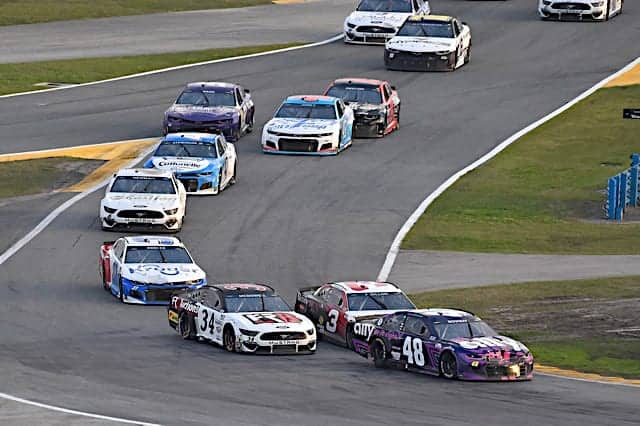 Are you tired of us old guys telling you how much better NASCAR was back in the day?

Thankfully, I will spare you that argument because while I often miss some of the old days, I don’t miss hearing about drivers getting hurt or killed as often as they did back in the day. Join me every month for a look at the world of auto racing with a heavy consumption of my favorite – which is still NASCAR.

What an incredible start to the 2021 season we have enjoyed so far. Michael McDowell is one of those “good guys” that has stuck around NASCAR all these years because he has talent but also because he is non-offensive to potential sponsors and team owners. But winning the Daytona 500 is the ultimate dream come true for any stock car driver. It’s almost like that story years ago about the former greenskeeper assistant who went on to win the Masters. As I recall, he had about 195 yards and used a nine-iron and before you know it, “It looks like a miracle— it’s in the hole!”

Not since the Daytona Day and Fan Nation campaigns have I been more puzzled by NASCAR’s attempt to find a clever way to promote its new season. Last year was a lost year for all sports fans with the pandemic ending auto racing weekends the way we know them. So I suppose against that backdrop, it makes sense to have a “Best Season Ever” campaign for 2021. But would Major League Baseball or the National Football League be so arrogant as to claim before any racing that this will be their best season ever? But after a satisfying Daytona 500 and a better-than-I-expected Daytona International Speedway road course race, maybe this will be NASCAR’s best season ever, so they’ve got that going for them, which is nice.

Looks Good on You Though

Sometimes I wonder if NASCAR teams paint their one off-paint schemes using whatever ink colors are left over in their vinyl graphic printers. For those NASCAR history buffs, that is one story of how Petty Blue was born back in the day from leftover paint, but I digress. Before I dare point out which color schemes were the worst at Daytona, I will fully admit I still need Garanimals tags to pick out my clothes in the morning. (You young folks can Google that so you get the attempt at humor.) While some of the cars look pretty good standing still like the No. 24 Axalta car of William Byron, when they are at speed, the graphics and colors seem a bit busy. But when you paint a car the way Anthony Alfredo’s No. 38 team, did I wonder if you get a free bowl of soup with that scheme? Also, shouldn’t that associate sponsor called Dude Wipes be located on the back of the car? But any sponsor looks good on you though, No. 38.

It’s so great to see Ryan Newman back at Daytona this year after the track tried to kill him last year, so it’s a little difficult to be critical of the team this week. It was great to see the first carbon neutral team in NASCAR follow in the footsteps of carbon-free girl Leilani Munter. But if you are going to get the carbon neutral thing to be positive, shouldn’t you make sure the car is faster first? I know Newman is in great shape, but are they having him pedal the car to reach that carbon neutral goal? Hopefully the team won’t be an incredible slouch all season.

It’s In the Hole – By the Numbers

A few years ago when I had a report that he was testing late models, I confronted the teenaged Christopher Bell at the Knoxville Nationals. I asked him if the rumor of him going to NASCAR was true or whether he would end up in the Sprint Car Hall of Fame instead and he lied to me. (He wasn’t ready for the announcement and was stunned that someone was watching him.) But I have always been bragging that this kid could be even better than Kyle Larson in the bigger cars since he switched to pavement. After a hard-fought 16th-place finish in the Daytona 500, the kid scored his first Cup win last week on the Daytona road course. Bell scored the fastest lap 23 out of the 70 laps run, so even though he only led five laps, this was no fluke win. Granted it took a mystery caution for rain to give him the break he needed for his first Cup win, but Bell earned it being fast all day and being the closer at the end.

If the first two races of the season are any indication, this will be a much better NASCAR season this year. Before I wrap things up, I shall remind you of advice from the Zen Philosopher Basho. “A flute without holes is not a flute, a donut with no hole is a Danish.” See you next month.

Well to be fair (I am NOT defending NASCAR), the ad does say “might” be the best season ever. “Might” not be either which is what I am completely expecting.

So true…good point and thanks for the feedback!

By the way, I have NEVER wondered why NASCAR teams get the best deal on rental cars. So, with that in mind, I guess I don’t really care how NASCAR promotes its 2021 season if you don’t mind the advertising on your own site.

FS has to pay my huge salary somehow!! Thanks for your feedback and let me know if you need more advice on saving money on that rental car or on your extended car warranty!

“… from the Zen Philosopher Basho. “A flute without holes is not a flute, a donut with no hole is a Danish.”

Be honest, did you really get that quote from a philosophy class/book or did you lift it from “Caddyshack”.

“Don’t be obsessed with your desires Danny. The Zen philosopher, Basho, once wrote, ‘A flute with no holes, is not a flute. A donut with no hole is a Danish.’ He was a funny guy.”
Ty Webb (a.k.a. Chevy Chase).

FYI: I will respect you more if it was the latter. :)