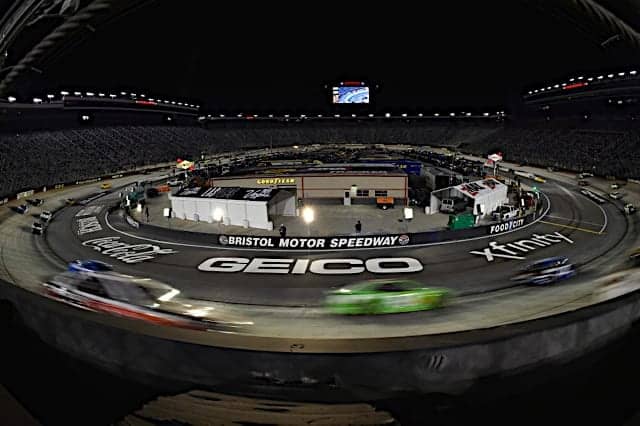 Last fall marked the announcement of the NASCAR Cup Series’ 2021 return to dirt in after many, many decades away.

And I didn’t know how to feel.

Which was weird. By all accounts, it should have felt like a homerun. NASCAR’s seven-season foray into dirt in the Camping World Truck Series at Eldora Speedway seemed to have been a hit, not just for spectators packing the stands but also those watching at home. Despite misgivings concerning how the trucks would even operate on a dirt surface, the racing product, while not identical to the competition that vehicles made for dirt racing showcased, still made for an enjoyable evening (and generally on a Wednesday, no less).

But it was still a strange few days. Knoxville Raceway was on the Truck schedule, giving the series two dirt races in 2021. Cool, great, awesome. The other track? Bristol Motor Speedway, whose surface was being covered in dirt for a March date, rather than, you know, just going back to Eldora.

Not only that, but the Bristol dirt track would also welcome the Cup Series in one of the oddest additions to a 2021 schedule full of newcomers.

First, the personal: I’ve been to Eldora multiple times. I was born, raised and lived less than an hour away for three-fourths of my life so far. The Truck race there was not perfect, but I’d take it over the series going to some cookie-cutter speedway the Cup Series also visits without batting an eye. Though I understand the politics behind its removal, I doth protest anyway. Probably in my blood.

But to rub salt in the wound, NASCAR opts to take one of its Bristol dates — a track that very rarely puts on a bad show, generally not one that schedule detractors say, “Yeah, less of that, please!” — and is like, haha, dump truck full of dirt go brrrrrr, now we’ve got a new dirt track at a place y’all already know, this is cool, right? Hundreds of dirt tracks around the country and we remove one of the series’ few short track races in place of one on dirt, while even the sport’s superstars continue to clamor for more short tracks.

It’s late February now. The 2021 NASCAR season is well underway. A bunch of first-time winners has got me feeling good. I’ve had a few months to reflect.

Screw it, I’m excited for the Bristol dirt race.

Footage earlier this week surfaced of a truck test of the Bristol dirt surface, which is gearing up for Bristol Dirt Nationals a week before (March 15-21) the Cup and Truck series descend on the track.

The next day, NASCAR announced its protocol for practice and qualifying for both series, with heat races taking place to set the field as they had at Eldora in the Truck Series.

First, the test. Truck looks good! It’s sliding around, drifting, doing what you’d expect a truck to do on dirt based on what we’re used to from Eldora the last few years. No, it absolutely pales in comparison to actual made-for-dirt vehicle types, but for what it is, it’s not bad at all.

And that’s not all that’s heartening. There are a few reasons, in fact, aside from the sheer passage of time and a decent-looking test that I’m more welcoming to the idea of Cup and Truck drivers on Bristol dirt than before.

These were expected, but it’s nice to have them in writing. After both series take practice times, each series will conduct four 15-lap heat races each to determine the field for each event (no word yet on how the lineups on those heat races are constructed).

The great thing here is that it means there isn’t a limit on the amount of teams that can show up in each series. We’re currently within a stretch of NASCAR races sans qualifying, which means the lineups are set by a balance of a few metrics based on the previous races. Either way, in the Xfinity and Truck series, you’re in a tight spot if you don’t have enough points to your name — a problem the Jordan Anderson Racing, Our Motorsports and Bassett Racing Xfinity teams know quite well.

This negates that concern. In 2013, 35 trucks showed up to Eldora for 30 positions (with two more on the preliminary entry list). Even more can show up here if they so choose — and that seems likely given that the season-opening race at Daytona International Speedway had 46 trucks trying to make the race. With qualifying, there’ll be 36 spots available, barring any changes, while the Cup Series will start 40.

All in all, this cuts down on gatekeeping. If some local dirt racing team is able to get its hands on a truck like JR Heffner, Jacob Wallace Racing and others have the past few years, they can show up for a spot in the big race. Same goes for the Cup race, and there are even more unknowns there since the series hasn’t had a dirt race in so long. With Trucks, perusing the Eldora entry list the last few years can give you an idea of who might be showing up. Cup? Who knows?

Oh, and those heat races are probably going to be absolute chaos, too, if enough teams show up for a limited amount of spots. Couple that with the fact that this will be the first time many of the drivers will have ever raced against others on that dirt surface, practice not counting. If nothing else, it’s going to make for an entertaining watch.

Speaking of: 40 Cup cars on a dirt surface

Will the dirt surface be so packed in that it’s basically like a completely hardened racetrack by the time the Cup race rolls around? Yeah, possibly. But that doesn’t necessarily negate the fact that 40 cars running around Bristol on dirt will be a sight to behold; Bristol’s normal asphalt is already a bunch of fun to watch as is, or at least it’s often at its best when it’s a one-groove track that necessitates a little bumping to pass.

Next month could indeed bring two (or more) lines drivers can take around Bristol. Or it could be a one-lane mentality where a driver has to root another out of the way in order to get by.

Wait, we’re gonna get ringers too?

First, a note about road courses. Remember when Ron Fellows could show up with a Nemco Motorsports team that hadn’t been to a Cup race in years and nearly beat the best in the business?

Yeah, that doesn’t happen much anymore. There’s a variety of reasons for that, but point is, the concept of the road-course ringer has practically vanished from Cup racing especially, with Scott Heckert the only fill-in last weekend at the Daytona road course, unless you count AJ Allmendinger, whose Kaulig Racing team was always going to run the race with him anyway.

It remains to be seen whether or not Cup dirt racing will be much different, but we do know we’re going to get at least one driver hired specifically for their dirt racing prowess: Chris Windom, who’s going to drive Rick Ware Racing’s No. 15, the team also announced this week.

OK, get ready for a smattering of thoughts here. Windom’s a beast on dirt and has some NASCAR and stock car racing experience in this mode of racing; he’s driven at Eldora in the Truck Series and has some ARCA Menards Series starts on its dirt tracks as well. Chances are he’ll be in the mix.

But will he, you ask? Isn’t RWR generally behind its peers when it comes to horsepower? Generally, absolutely, and that may indeed be the case here, too. But looking at Eldora’s Truck race as an omen, RWR may have a shot with the right driver (see: Windom). Bobby Pierce nearly won Eldora in an MB Motorsports that usually couldn’t sniff the lead lap, and Mike Marlar wheeled a Reaume Brothers Racing truck to the top five once as well. It often felt very Fellows-driving-for-Nemco-esque, and the same is possible here.

Of course, hiring a bonafide dirt guy as your driver may not even work out. Remember the discourse pre-Eldora 2013 when Scott Bloomquist was announced as the driver of Kyle Busch Motorsports’ No. 51? Well, there’s your winner, some said. Dirt Hall-of-Famer driving for one of the best teams in the series. How can this go wrong?

Bloomquist finished 25th, two laps down. He also elected to set up the truck like one would a normal dirt car (and without a front sway bar). But, like, still. You never know what’s going to happen.

Not to mention there’s dirt experience in the field anyway, whether it’s because of an upbringing in the discipline (Kyle Larson, Christopher Bell and the like) or because they have experience in the Truck race at Eldora (Bubba Wallace and Austin Dillon, for example). Like, sure, bring in a Windom type. He’s still gotta beat Larson and Co.

But it’s nonetheless exciting that the potential on the Cup side is there, especially after lineups have gotten so same-y over the years week to week. A little variety is nice. And that’s to say nothing about who’s going to end up showing up on the Truck entry list.

You get a Bristol crowd at a dirt race

We’re talking one of the best turnouts NASCAR has generally been able to muster, barring the last few years of crowd declines. Bristol is often one of the sport’s hottest tickets, and some chatter online seems to indicate that the demand for the dirt race is fairly substantial — even with a diminished capacity due to COVID-19 protocols.

This one’s kind of a work in progress because of that, though. With a limited capacity at Bristol next month, the crowd will not be the sellout, wall-to-wall throng of people that it could be. But if the weekend goes well and NASCAR returns to the track for a dirt race in the years to come, chances are the place will be electric.

*John Mulaney Voice* In summary and in summation,

One month from now, I may revisit this space and regret having ever been optimistic about anything in my life.

But after a week of announcements regarding the Bristol dirt races, for now, things are looking up. It may not be the dirt track many wanted, but it’s also difficult to argue with added variety to the schedule instead of a slew of intermediate and cookie-cutter tracks being contested twice a year.

Let’s see what NASCAR can do on this one. In a season that’s already off to a promising start, it could be the added shot in the arm that actually makes 2021 one to remember.

And if not, hey, at least we got a chance to watch a bunch of drivers spin out on dirt for a few hours. There are worse ways to spend an evening.

7 thoughts on “Fire on Fridays: How I Learned to Stop Worrying & Love Bristol on Dirt”