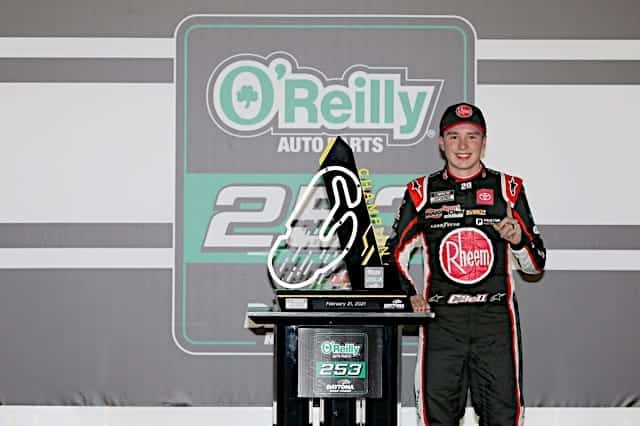 Now, 35 U.S. states can boast that they have produced a Cup winner, a far cry from NASCAR’s early years when nearly every driver hailed from the Southeast.

NASCAR has certainly evolved. In fact, California has already produced the second-most Cup winners at 26, just behind North Carolina’s 29.

Other western states, such as Nevada and Washington, have followed suit as NASCAR has embraced its role as a national sport. Alex Bowman even put Arizona on the list in 2019.

But the following 15 states still do not have winning representation.

Alaska: Incredibly, not a single driver from Alaska has entered a race in any of NASCAR’s three national touring series. Keith McGee has been floating a NASCAR Camping World Truck Series run this year at Richmond Raceway for Reaume Brothers Racing, so that may soon change.

Delaware: America’s first state hosts the popular Dover International Speedway, but no locals have ever won. In fact, very few drivers from this mid-Atlantic state have ever entered a Cup race.

Hawaii: Like Alaska, Hawaii has also never produced a Cup driver. Both did not even become states until 10 years after NASCAR was founded. Road-course ace Will Rodgers has competed in the Xfinity Series part time over the last few years for a variety of suitors and remains the only Hawaiian to do so.

Idaho: Brian Scott gave Idaho its best shot when he finished second at Talladega Superspeedway in the Cup Series in 2016. However, with no Idahoans currently competing in any NASCAR national division, the state known for its potatoes will likely stay on this list for years to come.

Louisiana: Louisiana is the lone Southeastern state that has not produced a winner. Very few Louisianans have gotten a shot at the sport’s highest level.

North Dakota: Just one North Dakotan has made a NASCAR start of any kind; Dustin Hapka finished 27th in a Camping World Truck Series race at Iowa Speedway in 2014.

New Hampshire: For a state that also hosts a Cup race every summer, it is surprising that New Hampshire has never produced a winner. Drivers such as Jamie Aube, Dave Dion, Bryan Wall and Andy Seuss have been very successful in some of NASCAR’s regional series.

New Mexico: American auto racing has benefited greatly from New Mexico’s talent. The Unser family has been widely successful in open-wheel racing, but little of that success has translated to stock cars.

South Dakota: In 1953, NASCAR held a Cup race in Rapid City. Two local drivers entered the field: Leo Ray and Bob Laswell. Ray bested Laswell by finishing eighth in the field of 15. To date, it remains the only race in NASCAR history that contained drivers from the Mount Rushmore State.

Utah: The Utah Motorsports Campus in Grantsville has hosted several ARCA Menards Series East races since its inception in 2006. While racing has become increasingly popular in Utah, very few drivers have made it to NASCAR.

Vermont: Vermont is another state steeped in New England racing culture. No driver has claimed a Cup checkered flag, but plenty of Northeastern Modified drivers call Vermont home, and Kevin Lepage has victories in the Xfinity Series.

West Virginia: Several drivers from West Virginia came to NASCAR in the 1950s. Arden Mounts, Bud Harless, Johnny Patterson and Pop McGinnis were among them. Patterson finished second in the 1952 Southern 500 at Darlington Raceway driving for HB Rainer, but his career came to an end before he could close the deal.

Wyoming: The country’s least populous state has produced just one Cup driver. Dick Hallock competed in seven events between 1950 and 1955. He scored a best finish of ninth at Fonda Speedway in 1955.

Some nuggets before you go: