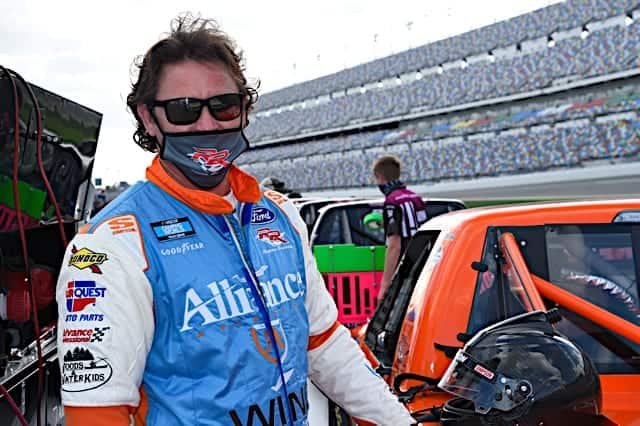 Until two weeks ago when he nearly won the season opener at Daytona International Speedway, you may not have heard that name unless you’re an avid follower of the Camping World Truck Series. He nearly snagged his first career victory on one of the sport’s biggest stages, though he took the checkered flag third behind Ben Rhodes and Jordan Anderson.

Interestingly enough, Roper nearly didn’t make the field for the race that 46 teams showed up to attempt to qualify for. In the field of 36 trucks, he took the final spot on speed by just seven hundredths of a second.

But instead of packing up the truck and waiting for the following weekend when the series raced on the Daytona road course, Roper started 31st and played it safe, staying well behind the lead draft. After finishes of 24th and 13th in the first two stages, the driver of the No. 04 started mixing it up in the lead pack. A trio of multi-truck cautions in the final 35 laps put Roper in a position where he was able to make an aggressive move to take the lead on the overtime start. In fact, he was leading exiting turn 4 before crossing the start/finish line third.

“What a great day and man, I was about 300 feet short. What a difference that would’ve made,” Roper said.

But despite being out front on the final lap, Roper said he never got excited inside the truck and instead tried to remain calm.

“Any time you come to Daytona and run in the plate race like that, I’ve found it’s just better not to think about it,” he explained. “You know what to do, you watch video so you hope you can make moves when you need to. But to be completely honest, I know it’s hard to believe, I didn’t get excited the whole race. I didn’t put myself in any situation until I had the opportunity.

“I knew when I needed to go and just from the history of the race, we were going to have a green white checkered. I was saving fuel from the minute I had to until we had plenty, and I just didn’t think about it. When I took the lead to take the white when I dove into one, even my spotter (Steve Barkdoll) got quiet. He told me 100 times, ‘I didn’t know what to say; I was speechless.’ I dove into (turn) 1 and was like ‘oh my god, I’m leading at Daytona on the last lap.’ When I got into (turn) 3 I knew I was in trouble when it got quiet and Ben backed off of me, I was too far out. But what a surreal experience.”

The career-best third-place finish betters a ninth-place run at Texas Motor Speedway in 2019. For Roper Racing, it was a clear indication that the hard work and dedication from the all-volunteer team of family and friends has been worth the long hours and late nights at the shop.

And while he’s officially listed as the team owner, Roper is adamant that he doesn’t own the team.

“I know I carry that title and I know I’m responsible for writing the checks, but that’s not really the way I look at it,” he explained. “I have a job as an owner to find funding and put these relationships together but I don’t feel like I own this team. This is my family’s team. Me and my brothers and brother-in-law and my friends that come out and help us with these cars; this is their team.

“You have to put a name down in that slot when you fill out the registration as owner, but I don’t feel like I own this team. I feel like my whole family does and if it wasn’t for them we wouldn’t have a team. It’s all of ours and they carry a lot of that burden too. I’ve just got a bunch of talented people around me that make this happen. That’s why it’s Roper Racing. We’re going to build a great team and hopefully be in this sport for a long time.”

And part of that long time in the sport includes a planned full-time schedule this season that was announced in late January. While he said the same in 2019 and 2020, he has high hopes that this year will be different.

“What kept me from racing full-time is I didn’t want to owe on our race equipment,” Roper said. “Now everything in that shop is 100% paid for and to be in that situation is great. We’ve still got a lot of things to work out to make it happen like we want. We’re going to attempt to race them all, but there’s a big difference between attempt to race them all and getting yourself a shot to win every time.

“I’ve made a commitment to myself that I’m not going unless we have everything we can to win from all the tires to the best equipment we can bring. This year I think we’re going to be able to do that. We’re doing a lot of the B2B partnerships and have a lot of these companies working together. My job is to make sure every one of our partners is getting the benefit out of their investment. We’ve got a lot of that in the works and if we can keep making that happen, I think we’ll be in good shape and be able to build a very successful race team.”

“Me and my wife are in a very different situation this year. Our youngest daughter just graduated high school, so both of my kids are in college,” Roper explained when asked about how he balances his workload. “When your kids are in high school, it’s always a busy time, and now that they’re in school and getting out into the real world, I talk to them every day and now we get to be friends now that I’m done raising them.

“They support us in everything we do and they always have with how much time it takes in the race shop and not just on the NASCAR level. My family’s always stood behind me on that; they knew it’s my passion, my love and they’ve always supported me on that.”

Unfortunately, the Daytona road course wasn’t as kind to Roper. A spin on lap 8 put him behind early and he was plagued by multiple issues throughout the night. While he was able to take advantage of the free pass and multiple restarts to work his way through the field, a lack of fuel pressure caused the truck to sputter late and sent Roper down pit road. He ultimately couldn’t get it to re-fire and was forced to retire with a 34th-place finish.

Roper’s two weekends at Daytona truly demonstrated how quickly a high point in racing can turn to a low point.