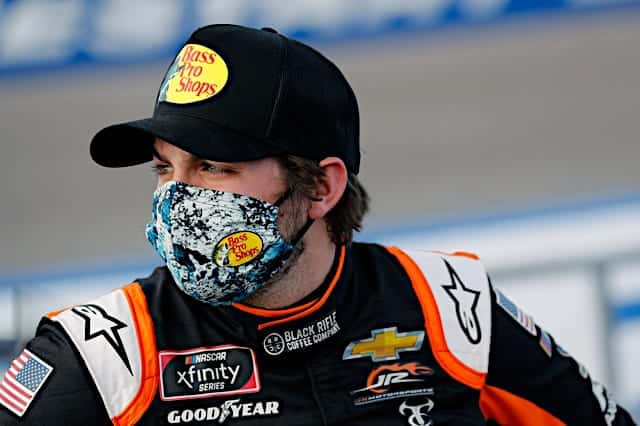 Noah Gragson has had the car to beat at Homestead-Miami Speedway in the NASCAR Xfinity Series the last three races and could not come away with the victory.

Saturday (Feb. 27) in the Contender Boats 250, Gragson was dominating the event and leading the field by over eight seconds with just three laps to go when disaster struck. He drove up on MBM Motorsports driver David Starr who was the last car on the lead lap in the 13th position. Leaving Gragson the high lane, Starr suffered a blown tire that shot him into the outside wall. Gragson, who was committed to running the high lane, slammed into the back of the No. 13 Toyota. The No. 9 Chevrolet was heavily damaged and came to rest on the apron of the racetrack. He finished 34th.

NASCAR Overtime is coming up on FS1 and https://t.co/qkbTgQOd94! pic.twitter.com/oxs6DlMekh

“You got dip—s in the way every week, but what are you gonna do?” a frustrated Gragson told FOX Sports 1. “We’ve dominated the last three races here. Definitely a bummer. They know who won this race, speed-wise, and the last three times we’ve come here.”

Last season, Gragson led the most laps in both Xfinity Series events in the 2020 Homestead doubleheader. In the first race, he had a huge lead with five laps to go when the caution came out. He ended up third after a late-race restart. In the second event, he was leading coming to the white flag when a caution came out and robbed him of victory after a restart. He finished fifth.

Ready for a white claw. Thanks everyone for the support! #ShouldBe3

It’s been a rough start to the 2021 season for Gragson as he’s recorded three finishes of 28th or worse. In the season-opening Daytona International Speedway 300-mile event, Gragson was involved in a lap 76 wreck which ended his day in 32nd. Last weekend at the Daytona road course his troubles started before the green flag fell. His car would not start on pit road and the team lost a couple of laps. He was able to battle back and finish on the lead lap but in 28th.

The only heartbreak is that Gragson is an overly impulsive fool who would not listen to his crew chief. He had an 8 second lead, his crew chief was telling him to back it down and save fuel, but instead he kept barreling along and then smacked straight into Starr when he cut a tire down. If Gragson had listened to what he was being told to do the accident would never have happened and he likely would have won the race. Then he goes on TV and swears at Starr. JRM ought to fire his sorry butt. Dramatic drives through the field are entertaining to watch, but to win you’ve got to actually finish a race.

I’m not sure that Gragson’s the smartest bulb on the tree…
He’s also seems to have this entitled vibe to him and has a temper to match.
sorta reminds me of…
Danica…
except he’s a little better at handling a racecar.

I’m not sure why the networks are so in love with him.

David Starr was still on the lead lap doing better than Gragson’s teammates. No reason to call him what he did. Too bad Junior goes for money drivers all the time.