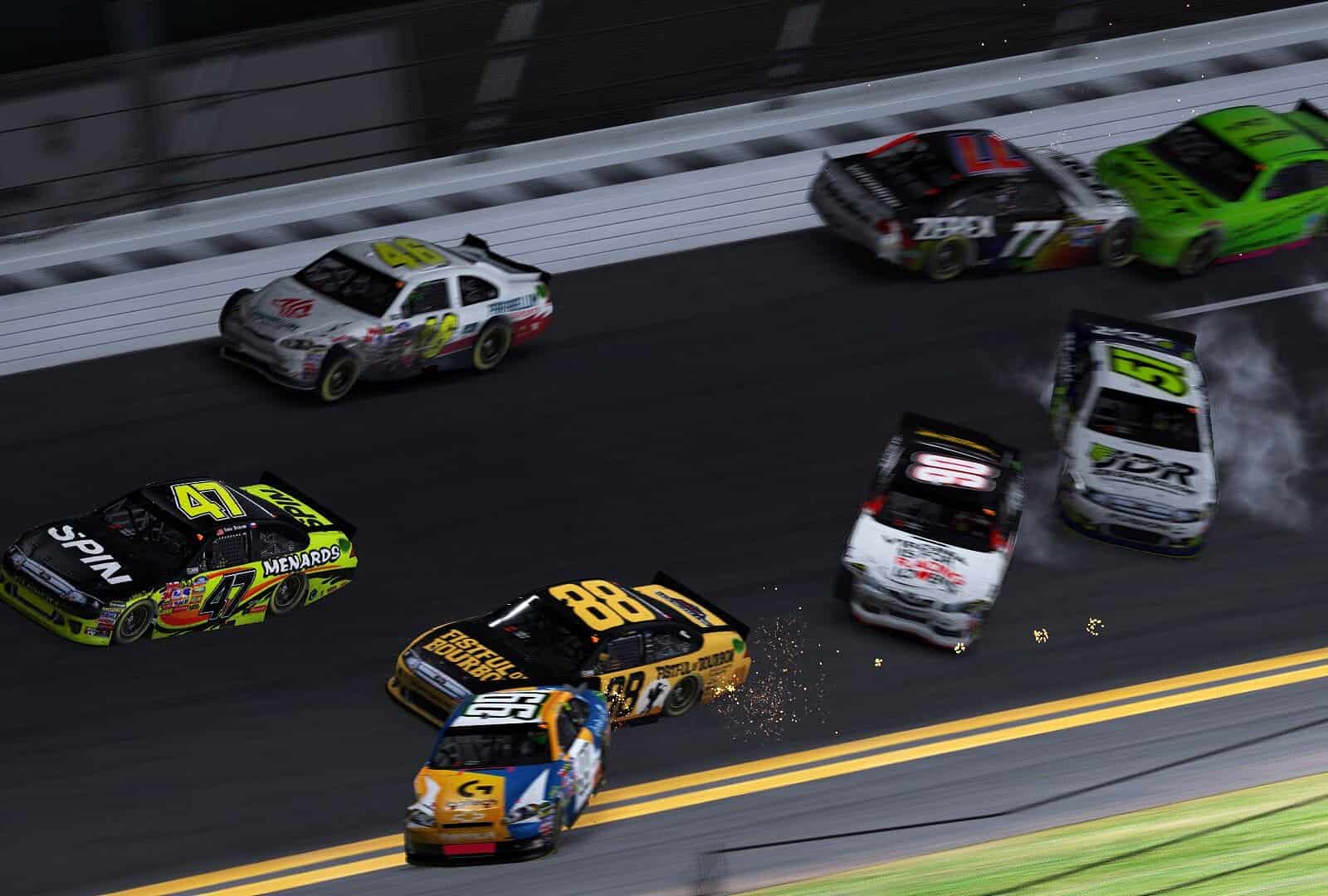 Another week of virtual racing is in the books. The eRacr.gg Carnomaly 500 qualifying races dominated social media headlines once again this week, but there was plenty of racing to go around the sim racing community.

The second race of the 2021 season at Auto Club Speedway saw FTF trading in the 2020 NASCAR race vehicles for a more powerful 2012 variant, the legacy NASCAR Car of Tomorrow on the iRacing service. 80 drivers attempted to qualify for the 43 car field, with just about half of those who didn’t qualify participating in the consolation event.

Graham A. Bowlin, Coca-Cola Series driver for Stewart-Haas eSports, took the pole position over 2017 FTF Cup Series Champion Taylor Morgans. The first two stages of the event went caution-free, all the way up to lap 80 in the 125 lap event.

Bowlin was victorious in the first stage, while Kollin Keister took his Spacestation Gaming Ford to lead the final lap of stage two. Up front, Keister battled with Bowlin and teammate Collin Bowden before Michael Guest showed up to the party. Guest, now racing for Jim Beaver eSports in the Coca-Cola Series, took the lead for the first time at lap 77. Just a few laps later, the caution flag flew and set up the rest of the race for a slew of stoppages.

The final 45 laps saw 10 cautions for 29 laps. Guest was able to use this to his advantage, as he could easily hold the lead while the field constantly reset through the cautions. On the final restart, Guest held off a late charge from Keister to win the event.

“It’s not often you get to race these low downforce or fun packages,” Guest said in virtual victory lane on BottomSplit. “(Keister) decided to go pretty hard at the beginning and I just wanted to save. We both ended up at the same place at the end of the first run. Luckily my pit stop was really good, and I think that was the only reason I was up there with them.”

The season continues onward this weekend for both the FTF Cup Series and FTF Grand National Series presented by Barr Visuals.

Here's how the standings look as ftfgnspbbv heads to Five Flags and FTF Cup goes even more south to Homestead-Miami.#FTF pic.twitter.com/8FGEcSn52Z

The full race replay is available on BottomSplit.

The Monday Night Racing presented by Tufco Flooring Round of 10 kicked off on Monday night at Dover Int’l Speedway, with the 36-car field all utilizing the three NASCAR Cup Series vehicles.

Anthony Alfredo, driver of the no. 38 for Front Row Motorsports in the NASCAR Cup Series and one of the 10 drivers in the playoffs, took the pole position in the event. During the pandemic, Alfredo was able to capture victory utilizing iRacing’s NASCAR Xfinity Series vehicles in NASCAR’s Saturday Night Thunder series, so it was no surprise to see him fast often and early during the event.

Alfredo and ARCA Menards Series East driver Rajah Caruth traded the lead position at lap 40 when Alfredo pitted under yellow. 40 laps later, Alfredo was back up in the top position. With the race slowed 12 times for 49 laps, pit strategy came into play at the end of the race. Max Kennon took control with nine laps to go in regulation through an alternate strategy.

The field finally took the white flag on lap 132 after three attempts at overtime. Kennon led the field onto the backstretch, but contact from Will Rodgers and Alfredo sent the trio plus Kyle Busch spiraling out of control with a half of a lap to go.

Ryan Vargas split the carnage and made it back to the line first, leading only one lap, but the most important one to take his first victory of the second season.

“I’ll just say this. It is about time,” Vargas told Podium eSports post-race. “We have had way too many races get taken out from under us in this series. I can name about five or six of them where I was just up front and we’d get wrecked. It feels good to have a little bit of luck.”

Kyle Busch was originally slated as the first entry into the event but had to withdraw the day of. NHRA Champion Ron Capps, NASCAR driver Kaz Grala, and NTT Indycar Series drivers Conor Daly and Stefan Wilson were only some of the names on the entry list.

The race only had three cautions for 16 laps, with some of the bigger names such as Jeff Green, Wilson, and Grala falling out of the event.

Collin Fern started on the pole and led the first 18 laps, but it was Ryan Lutz who took the victory after leading the majority of the laps at 61.

The Top 88 drivers took to the Daytona Int’l Speedway for Valvoline Pole Night on Wednesday, the results setting the lineups for the Blue Emu Battle 150s the following evening. 86 of the 88 cars took time, with the 2020 eNASCAR Coca-Cola iRacing Series champion for William Byron eSports, Nick Ottinger, taking the top spot after going out to qualify last. Seth DeMerchant qualified second, and was also locked into the event.

Ottinger opted to take the Whitz Racing Products “last-to-first” challenge, and will start 43rd next week in hopes to win an extra $15,000 if he wins the Carnomaly 500.

The drivers who qualified third through 88th all moved into the Blue Emu Battle 150s, a pair of 60-lap races on Thursday night. The Top 20 finishers in each battle advanced to the Carnomaly 500. The first Blue Emu Battle was won by four-time eNASCAR Coca-Cola iRacing Series champion Ray Alfalla and the second battle was won by Chris Overland.

The final spot in the eRacr.gg Carnomaly 500 will be a promoter’s choice, still to be determined.

On a whim, to give something extra to those who didn’t make it out of the Carnomaly 500 preliminary rounds, eRacr.gg collaborated with both BottomSplit and MoonVision to bring the MoonSplit 200 to reality.

The broadcast trio of Parker Kligerman, Landon Cassill and David Schildhouse all put their microphones aside and hooked up their racing rigs for the night while BottomSplit commentators Jordan Werth, Shawn Butler, Kevin McAdams and Sam Watson joined forced with Travis Brown from MoonVision. Together with help from eRacr’s Joshua Mendoza, one of the greatest crossovers in sim racing put together a format of events for those who wanted to keep racing the iRacing Car of Tomorrow on Daytona.

It wasn’t a great race for Kligerman, who was caught up a few times and wound up finishing 32nd. Schildhouse was in contention on the final restart but fell back to finish in seventh. Cassill led the charge of the broadcast booth, finishing second.

Casey Kirwan, who had an amazing save coming to the white flag, was able to dig his way back into contention by the backstretch. Kirwan shoved it in on Will Norton and Tyler Oneal in the final corner, and after contact, made it back around first for the victory.

Watch the final laps from eRacr.gg:

FTF Racing is up next on Sunday night, once again in the iRacing Car of Tomorrow at Homestead-Miami Speedway. Coverage will go live at 8 p.m. ET on BottomSplit.

Monday Night Racing Presented by Tufco Flooring will finish off the Round of 10 with a Street Stock battle at Rockingham Speedway on the first day of March. Podium eSports will have the call on their secondary channel Podium 2 at 8 p.m. ET.

The final race in the three-week-long Carnomaly 500 event takes place this Wednesday on the eRacr.gg platform. Join the broadcast for a fun and interactive show at 7 p.m. ET.

The first set of races in the iRacing Road to Pro qualifying round kicks off this week as well on Thursday night at Las Vegas Motor Speedway. Top oval drivers will compete against one another for eight races to finish in the top 70 in the overall standings. The second split will be on STN Racing, and it’s unconfirmed where the top split will end up. Podium eSports will likely have the call.

This virtual stuff was OK when there was no racing. Now, not so much. Sorry.