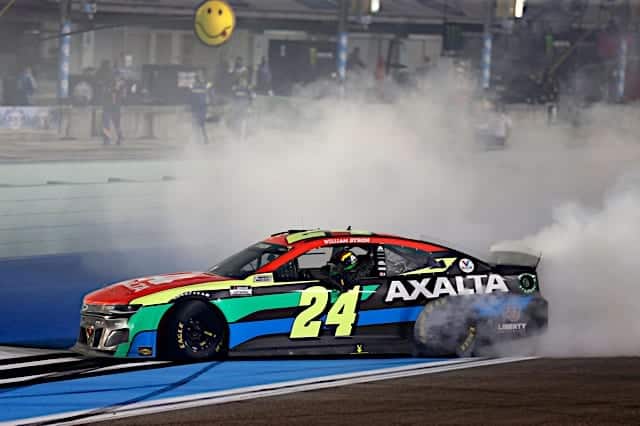 Joey Logano led the field to green after initial pole-sitter Denny Hamlin dropped to the back due to unapproved adjustments. Logano’s Team Penske stablemate Brad Keselowski passed the No. 22 for the lead soon after, but Chris Buescher‘s No. 17 started growing larger in Keselowski’s rearview mirror.

Buescher cut the gap down lap-by-lap until the competition caution flew, eventually battling with and passing Keselowski once the race went back green.

After starting 12th, Buescher took the lead over from Keselowski and gapped second place by nearly three seconds, but a caution finally flew for a fire under the No. 15 Rick Ware Racing entry of James Davison.

Buescher won the race off pit road but lost the lead to Keselowski. Buescher’s No. 17 was stronger as longer runs went on, though, and closed back up and passed Keselowski. Buescher set sail and won the opening stage of the race, his first stage victory and second in his career, and was followed by Keselowski, Martin Truex Jr., Byron and Alex Bowman.

Despite a possible tire rub to start the second stage and smoke flaring out from the No. 17, Buescher chased Keselowski down again to retake the lead. Truex’s No. 19 was starting to show its mettle, though, and he closed in on Buescher, passing the No. 17 after a brief battle.

Chase Elliott, who had gotten by Buescher earlier to briefly take the lead, made an incredible save as he slid up in front of Keselowski and Hendrick Motorsports teammate Kyle Larson.

An incredible save out of @chaseelliott! ? pic.twitter.com/oAnaf2gP34

Corey LaJoie‘s No. 7 had its engine expired and went up in smoke with just six laps to go in the second stage, bringing out the caution.

A one-lap shootout to conclude stage 2 featured a battle between Joe Gibbs Racing teammates Hamlin and Truex Jr., allowing Byron to sneak through and win the segment. He kept that trend going, too, retaining the lead as the third stage got underway before another caution flew.

This was for Ryan Blaney and Aric Almirola, the latter of whom slid up on the exit of turn 4 and into the No. 12. Blaney cut a tire as a result and Almirola suffered damage, giving way to most of the field coming to pit road.

Look out! @Aric_Almirola and @Blaney make contact coming off of the corner at @HomesteadMiami. pic.twitter.com/dtTUMLgxsJ

Larson won the race off pit road, followed by Truex, who quickly took the lead after the restart before Byron reclaimed the top spot.

Kurt Busch started making his way through the top 10, but a vibration forced the No. 1 to pit road from fourth. He eventually bounced back to finish eighth. Meanwhile, Michael McDowell made his way into the top 10 and battled all the way up to sixth before falling back.

Byron was out to a five-second lead with 10 laps to go, while Tyler Reddick jumped to fourth and started cutting into Byron’s advantage. Hard racing with Larson and Truex, though, eliminated any chance of the No. 8 having a shot at catching Byron for the win.

The No. 24 proceeded to cruise onward to the win, crossing the line more than three seconds ahead of Reddick. The duo was followed by Truex, Larson and Kevin Harvick to round out the top five, while McDowell, Ryan Newman, Kurt Busch, Bowman and Kyle Busch completed the top 10.

Retweet to congratulate @WilliamByron and @TeamHendrick on their NASCAR Cup Series WIN at Homestead-Miami Speedway! pic.twitter.com/zpTcitfHI8

“[Crew chief Rudy Fugle] has been huge for my career,” Byron told Fox in his post-race interview. “He’s the reason I’m here and I’m glad we could get him. He’s just awesome, and this whole team did a phenomenal job, everybody – pit crew, over the wall…I can’t even believe it, honestly. Just a really smooth day, and we worked hard in the winter on this track. I can’t believe it.

“I had to go to the wall at certain times,” he added. “…Definitely didn’t do it as good as the Xfinity cars do it, but I used it when I had to. This car was just awesome, it really is [a product of] a lot of hard work. I think we went to the sim four or five times this offseason, and it pays off, man. Just awesome.”

Byron and Fugle reunited at the start of 2021, having been paired up for the 2016 Camping World Truck Series season. That effort yielded seven wins, the duo setting a rookie record with that mark.

NASCAR’s premier series next heads west for a two-race swing on the opposite coast, kicking off with the Pennzoil 400 at Las Vegas Motor Speedway. Joey Logano is the defending winner of the race, which will get underway on Sunday, March 7 at 3:30 p.m. ET with coverage on FOX.

It was such a nice change to see most of an example of Brian’s product from an oval track instead of the cookie cutter D-shaped tracks and gimmick road courses.