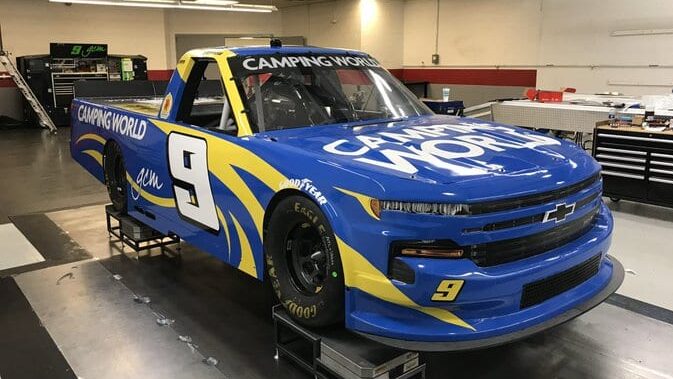 In all, 10 trucks will carry the scheme.

But instead of Enfinger’s usual No. 98 ride at ThorSport Racing, the 2019 regular season champion will pilot CR7 Motorsports’ No. 9 truck usually driven by Codie Rohrbaugh.

The sponsorship was revealed by Camping World CEO Marcus Lemonis on Twitter.

Enfinger is not racing full-time in 2021. The six-time series winner is splitting the season in the No. 98 with former Kyle Busch Motorsports driver Christian Eckes.

Enfinger finished 11th in the season-opener at Daytona and Eckes placed 10th on the Daytona road course.

Meanwhile, Lemonis isn’t stopping with Enfinger. He put out call for any other teams that are unsponsored this weekend.

Which @NASCAR_Trucks are unsponsored this weekend? Respond here if you are and if you know of someone get their attention quick pic.twitter.com/5KEbCUXnJZ

Talking to @marcuslemonis at 1am and designing a @CampingWorld @NASCAR_Trucks was definitely a welcome reason to be up late 🙌🏼 thank you guys for all the awesome tweets. pic.twitter.com/6XJ8Lny1qI

1 thought on “Camping World to Back Grant Enfinger, Others in Truck Series Race at Las Vegas”