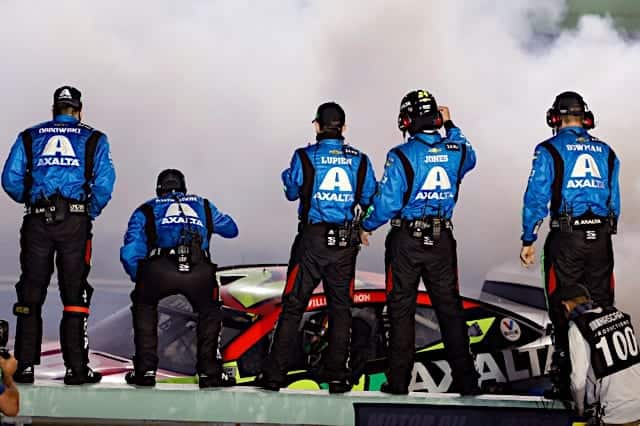 Any interesting story isn’t complete without a good surprise or two. The NASCAR Cup Series has been racing in Florida for better than three weeks, and I don’t think it’s possible for the three trophies to be going back to North Carolina with a more unexpected trio of drivers. But the statistics would support the argument that perhaps the most recent one shouldn’t be a surprise at all.

Some drivers just click with a certain crew chief. History is full of such examples, like Richard Petty and Dale Inman, Dale Earnhardt and Kirk Shelmerdine, Jeff Gordon and Ray Evernham, and of course, Jimmie Johnson and Chad Knaus. It may be a little early (OK, way too early) to put William Byron and Rudy Fugle in that same category, but the potential is there. Fugle led Byron’s Kyle Busch Motorsports team to seven wins and narrowly missed winning the Truck Series championship.

Now the two have been reunited for the first time at the Cup level, and clearly there’s something between them. Rick Hendrick is one of those owners who does an excellent job of pairing up people who make each other better, and in hindsight, the move was probably a no-brainer for Rick. We will likely see a lot more evidence to determine if it was another great personnel move, but so far, so good. While the first two Cup winners in 2021 may be surprising in one way or another, Byron’s win should shock no one who knew about the history between the young driver and the mighty mind atop his pit box.

That’s how many laps Noah Gragson has led in his four Xfinity Series races at Homestead Miami Speedway. However, victory eluded him once again on Saturday, as his car hit more places in South Florida than most hurricanes. Walls, other competitors and even eventual winner Myatt Snider all borrowed some paint from Gragson’s No. 9 Chevrolet.

David Starr has a tire go down and leader Gragson had nowhere to go. (Via @XfinityRacing) pic.twitter.com/7WvLqJ2paz

Consecutive Cup top-10 finishes to start the season for Michael McDowell. The Daytona 500 winner had never strung together three such results in a row until this year, and it leaves him fourth in the point standings. Even if he didn’t have the safety net of being locked in by his Daytona 500 win, McDowell would still be in the running for a playoff spot. Imagine if someone had said that out loud a month ago.

In a season full of surprises already, there’s one that stands out way ahead of McDowell’s 500 crown or any of the first time winners. Daniel Suarez and Team Trackhouse are bringing way more speed than I could have fathomed. Suarez scored a 16th-place finish at the Daytona road course, then backed it up by leading a lap and ending up 15th at Homestead. When you look at other new teams in recent history and how they did out of the gate, it makes what the No. 99 has done this far that much more remarkable.

Now that the team has picked up some sponsorship from long-time heavyweight Camping World, things could get even better for Suarez and company. It’s very early, but I’d say team co-owner Pitbull, a.k.a. Mr. Worldwide, has gotten himself involved in a pretty good organization.

That’s what position Byron started in on Sunday, becoming just the second driver to win at Homestead without starting in the top half of the field. Denny Hamlin charged to the victory after starting 38th in 2009, but generally speaking the winner at the track typically begins much closer to the front of the grid.

Greg Biffle started 22nd in 2006, the last of his three straight wins on the 1.5-mile oval. Biffle and Tony Stewart, who won the first two Cup events at HMS, are the only drivers to go back to back.

The top three divisions all head west this weekend to Sin City. But in the last 14 Cup races at Las Vegas Motor Speedway, just two have gone into overtime courtesy of a late race yellow flag. In that same span, only one of 14 Xfinity races ran past the scheduled distance. Vegas hasn’t hosted a lot of late race drama as far as bunching up the field for late restarts. Maybe that’ll change this year. Wouldn’t be the first surprise of the season, that’s for sure.