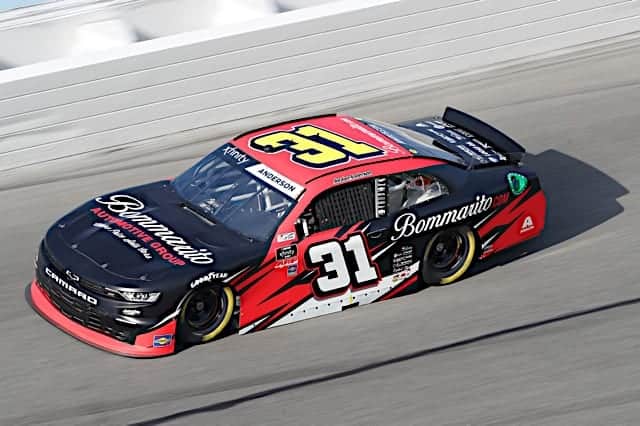 Three weeks ago, Jordan Anderson was on the highest of highs.

For the second consecutive year, the owner-driver guided his No. 3 Jordan Anderson Racing Chevrolet to a strong runner-up finish in the season-opening race for NASCAR Camping World Truck Series at the Daytona International Speedway.

The very next morning, NASCAR informed him he could not race for months. That was it. End of story.

Over the offseason, Anderson made two big announcements. Not only had he gotten engaged, but the 29-year-old would also be taking his fledgling team to the NASCAR Xfinity Series, flanking his tenured Truck team.

It’s official. We are going @NASCAR_Xfinity racing this year!

Thankful to everyone at @BommaritoAuto and every single one of our amazing partners for believing in what we are trying to build, and develop for the future.

See you in Daytona! pic.twitter.com/h8zn16FOvM

Anderson hoped to be competitive after making a sizable offseason investment to acquire an impressive fleet of cars and engines from Richard Childress Racing.

“It was going to be the best opportunity I have ever had in my entire career as a driver to drive a competitive car,” Anderson told Frontstretch. “We had put some great equipment together and great motors together. We really wanted to bring some value to the Xfinity Series.”

However, all the hard work and preparation in anticipation of the brand new effort has gone by the wayside.

Anderson has fallen victim to a loophole in NASCAR’s new qualifying procedure. In the weeks and months since the onset of the COVID-19 pandemic, the sanctioning body has had to adjust its qualifying procedures across all three of its national touring series.

A myriad of different formats was used last season before NASCAR finally settled on a mathematical metric in races that did not have actual qualifying sessions. The metric is based upon percentages relating to owner points, as well as finishing position and fastest lap ranking from the previous event.

To ensure all competitors had an equal shot at making the race, the sport expanded the NXS and NCWTS field sizes to 40.

This was a huge help for the Xfinity Series, as all 37 full-time teams were assured a spot in the field despite the absence of qualifying.

The same system has been used this season. However, NASCAR will be holding physical qualifying sessions at select events this season, meaning the qualifying metric will be thrown out the window at said races. Thus, those contests will feature 36-car fields in both series when qualifying is held.

While the majority of races this season will feature 40 cars or trucks, the number of full-time NXS teams had jumped from 37 last season to 43 this season.

NASCAR had intended to hold a rare qualifying session at the season-opening Daytona race, but an errant rain shower thwarted those plans.

With no owner points, Anderson, Bassett Racing, and the new second entry for Our Motorsports were left on the sidelines at the World Center of Racing (along with three part-time teams) before ever getting a fair shot to qualify — and have been locked out since.

“We knew that going to Daytona, our one shot to get in was to qualify our way in,” Anderson added. “NASCAR had laid it out that way. They had structured it that way. Unfortunately, that rainstorm hit us and it was called very quickly.”

Since they did not compete, the Anderson, Bassett and Our trio were also left without crucial statistics from Daytona which would boost their spot in the qualifying metric. Without another qualifying session scheduled before the series heads to Circuit of the Americas (May 22), the three teams will essentially be forced to sit out for months even after committing to full seasons.

As one may surmise, responses were not positive.

“It is super frustrating, especially for all the long hours and hard work that [we] have put in to get that car ready,” Bassett Racing co-driver Dillon Bassett told Fronstretch. “For us not even to have a chance to go to the racetrack this weekend even if we wanted to, it really hurts.”

The blow is especially difficult for the family-owned team that had originally planned to enter all 33 NXS races, with Bassett and his brother Ronnie sharing the majority of the driving duties. It would have been a first for the team after competing part-time the last two seasons in a partnership with DGM Racing.

Because of the rain shower and no points, the Bassetts are sitting out the nine races between Daytona and COTA. The team is potentially looking for a driver with road racing prowess to fill the seat at COTA to ensure they make the field. Beyond that race, their plans still remain uncertain.

However, the sting of the qualifying rainout caught the Bassetts completely by surprise. Confusion and a lack of dialogue with NASCAR over the rainout and subsequent “lockout” perpetuated their frustration.

“We’ve been in contact with NASCAR a little bit, but there still doesn’t seem to be any answers because they have their top 40 set,” Bassett said. “The only way we are going to race before COTA is if someone backed out of a race. The Vegas entries are already set, so we wouldn’t be able to until after Vegas. It’s almost a disaster. We just got to keep sending our entry in. You don’t really hope for bad luck for another team, but that’s the only way we are going to be able to race.”

Anderson’s approach to the situation has been one of optimism.

“This is a setback for a great comeback for our team,” Anderson said. “We will make it through this. We will come out stronger.”

Despite the lockout, Anderson continues to operate his truck operation alongside Bruce Cook. Although he is not full-time, Anderson is still slated to compete at Las Vegas this weekend and at Talladega Superspeedway this fall, with the potential to add more races.

Brothers Bobby and Roger Resue will also drive a combined total of eight races in Anderson’s truck with the opportunity for more drivers to be named at a later date.

However, the lockout has also trampled Anderson’s bid for NXS Rookie of the Year, all but handing the title to Ryan Vargas (who is the only other full-time ROTY candidate).

Unlike the other two teams, Our has managed to find the track on the NXS this season with their second entry. The sophomore team has already bought two rides this season, but it is an added financial burden. While teammate Brett Moffitt is securely in on points in Our’s flagship entry, Andy Lally piloted the second entry at the Daytona Road Course using points from BJ McLeod Motorsports.

Tyler Reddick did the same at Homestead Miami Speedway, but used points from the No. 23 Chevrolet, which is normally an entry fielded in a partnership between RSS Racing and Reaume Brothers Racing. Success came quickly as Reddick crossed the finish line second, though he was later disqualified after failing post-race inspection.

While Reddick is again listed on the entry list in the No. 23 this weekend for the contest at Las Vegas Motor Speedway, it remains unclear as to the future of Our’s second car.

NASCAR continues to move on like normal while leaving Anderson, Our and Bassett scrambling. While the situation has proved tough, animosity toward the sport has not been too prevalent among them.

“I think [NASCAR] is doing the best that they can with the situation,” Bassett said. “It’s just tough for everybody. I can’t really be mad at them.”

For a series that has needed new teams and drivers (especially after struggling to fill fields in the two prior seasons), the unintended lockout has ultimately denied the three teams a chance to bolster its ranks.

NASCAR currently has no plans to adjust its procedures, so for now, the locked out trio can only hope to make it on track later this season. 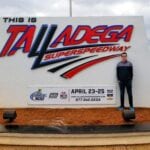