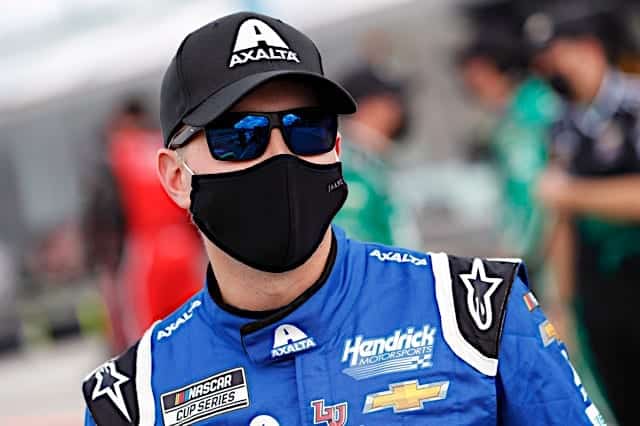 His first win was controversial, coming after he triggered a multi-car crash at Daytona International Speedway in the 2020 regular-season finale to squeeze into the playoffs, but William Byron’s second victory was a statement. Byron dominated at Homestead-Miami Speedway, leading 102 of 267 laps, including the final 58 circuits of the race, beating runner-up Tyler Reddick to the line by almost three seconds.

Byron was reunited with his former Camping World Truck Series crew chief Rudy Fugle this year, and the pair would love nothing more than to pick up where they left off in 2016 when the then-teenage Byron won seven races for Kyle Busch Motorsports. Fugle has a pair of Truck titles, winning in 2015 with Erik Jones and 2017 with Christopher Bell. He and Byron finished fifth in 2016 but won the season finale after a blown engine eliminated them from contending for the title. Chemistry is a funny thing. Byron was paired with seven-time Cup champion crew chief Chad Knaus in 2019 and 2020 but the duo never really broke out. Will 2021 be Byron’s coming-out party with Fugle at the helm?

Speaking of Reddick, the second-year Richard Childress Racing driver put on quite a show in the final laps, flying through the field and passing car after car with apparent ease. The scramble among Reddick, Martin Truex Jr. and Kyle Larson for second in the final 20 laps was a battle royale. In fact, Reddick’s car was so fast he was beating Byron’s lap times by a half-second despite Byron’s clean-air advantage. He ran out of laps before having an opportunity to try to run down Byron, but it was a statement race for the sophomore.

After nearly a year out of a Cup car, Larson hasn’t forgotten a thing. He scored his first top 10 of the 2021 season in the Daytona 500, and it took just two more weeks for him to find the top five. Larson led five laps in the final stage at Homestead before handing over the lead to teammate Byron. Larson finished fourth, erasing any questions about whether he’d be competitive from the get-go.

But competitive and winning are two different things, and Larson’s fade from second to fourth in the closing laps is a concern. Yes, he was fast and led a handful of laps, but Larson’s weakness has always been his struggle to close the deal. He should have double his six Cup wins, maybe more. He’s more than good enough to win at this level. But he has to be there at the end to do it. Will 2021 be the year Larson finally puts the questions to rest?

2020 Homestead winner (and active HMS win leader) Denny Hamlin was slated to start from the pole, but an unapproved pre-race adjustment sent him to the rear for the start.  Hamlin struggled to climb through the field but raced his way as high as second by the conclusion of stage two. Hamlin sealed his own fate on the final round of pit stops, speeding entering pit road.  That sent him to the back again, and while he climbed back to finish 11th, it most likely cost him a bigger night. Hamlin’s still the point leader, but he can’t make mistakes like that on a regular basis.

Defending Cup champion Chase Elliott showed what’s really been his weakness over the last couple of seasons: inconsistency. He finished a lackluster 14th, the only Hendrick driver to finish outside the top 10 on Sunday. After his season-opening runner-up finish in the Daytona 500, Elliott hasn’t been as strong as expected. A top 15 is a solid finish, but he wasn’t really a contender for more this week.

Early contender Chris Buescher surprised early in the race, bullying his way past Brad Keselowski to take the top spot and leading 29 laps en route to a stage one win. As day turned to night, Buescher fell to a 19th-place finish, but overall the day was a bright spot for Roush Fenway Racing, showing strength at an intermediate track with a top 10 for Ryan Newman.

Daytona 500 champion Michael McDowell continued his improbable hot streak, finishing sixth, his third top 10 of the season. Only former champ Kevin Harvick has an average finish as good as McDowell’s fifth. He doesn’t have the stage points of some of his competitors, which has hurt a little in the point standings, but McDowell’s strength this season is proof that many underfunded teams lack neither talent nor drive to succeed.

From the Busch Clash through the Daytona road course, it looked as though the Toyota stable had found a little extra horsepower. The Joe Gibbs Racing cars have been lightning fast and satellite 23XI looked strong as well. Heading into Homestead, it looked like they’d be the cars to beat, with maybe the Penske Fords mixing it up with them.  But while Truex had a solid third-place finish and led 37 laps on the day, 23XI’s Bubba Wallace was the only other Toyota driver to lead laps (two), and Kyle Busch was the only one other than Truex to post a top 10 finish.

Should they (and the Penske Fords) be worried? Not yet. Hamlin had speed and succumbed to his own mistake Sunday. Wallace’s team is brand new and learning how to be contenders. It’s unlikely that the Toyota camp won’t be contenders for the title months from now.

The two-race West Coast swing kicks off this coming Sunday at Las Vegas Motor Speedway. Hometown hero Kurt Busch won the fall race at Las Vegas last season, with Joey Logano claiming last spring’s go-round. Logano also holds to top average finish at the mile-and-a-half at 8.4, but teammate Ryan Blaney is second on the average list at 9.7 with Larson just behind him at 10.8. Both Blaney and Larson are looking for a statement win, though neither has won at Las Vegas to date.

2021 has been a season of unpredictability to date. Byron was dominant Sunday, but will he be the driver to beat as the series heads to another intermediate track? It seems more likely that there will be a fourth different winner this weekend, but will it be someone expected, or will the trend of surprising winners continue for another week?

So far fans have been treated to four first-time winners in six races across the Cup and Xfinity series this year. Ty Gibbs and Myatt Snider have taken their first trophies in Xfinity, and McDowell and Bell visited Cup victory lane for the first time. The winners of the three Cup races so far have a total of four career wins among them.

Are the winds of change blowing through NASCAR’s national series? Maybe. It’s hard to say the usual suspects won’t make themselves heard soon. There’s a reason they’re veterans with winning records backing them.

It’s good for NASCAR to see a mix of veterans and youngsters contending each week. A variety of winners keeps fans engaged. Will more drivers take first wins this year?

It’s a definite possibility. Drivers who look like they’ll have the equipment to win include Reddick, who’ll make it soon if he has another run like he did this week. Chase Briscoe is in the No. 14, and Stewart-Haas Racing certainly puts winners on track. 23XI can take Wallace to the top, though for a brand-new team, next year might be a more realistic target. If he and his team don’t let 2021 become a lame-duck year, Matt DiBenedetto has knocked on the door to victory lane in the past. It could be a fun year.

If we are looking at a changing of the guard, these young drivers are talented enough to make it happen. And with Austin Cindric moving to cup next year as well, the future looks especially promising from a talent perspective.