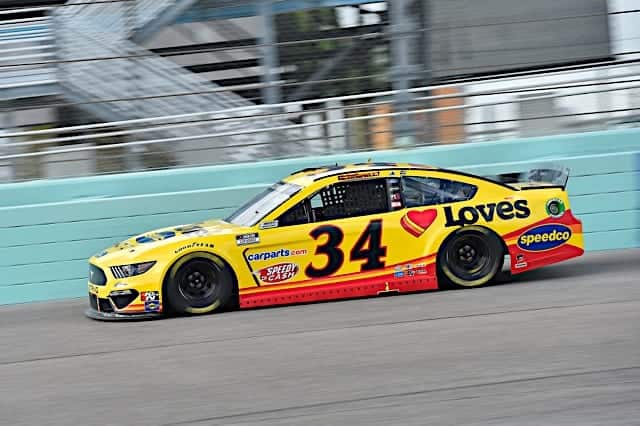 Only two drivers currently have finished in the top 10 in the first three races of 2021. One was likely expected in 2014 NASCAR Cup Series champion Kevin Harvick. The other continues to carry on the momentum after a Cinderella story moment at the Daytona 500. Michael McDowell has now finished first, eighth, and sixth to start out the season. In 2020, McDowell had a career-high four top 10s. He is now 75% of the way there after Sunday’s race at Homestead-Miami Speedway.

With the current qualifying system for most weekends, a strong finish at the Daytona Road Course set up McDowell for a sixth-place starting position for the 400-miler. The Phoenix, Arizona native ran in the top 20 for the majority of stage one en route to a 19th place result. He would stay in the relative area for stage two to take the green-white-checkered in 20th.

McDowell cracked the top 10 with just under 60 laps to go after a caution. The veteran driver then worked his way up just outside the top five. With 9 laps remaining, McDowell made one final pass to take the sixth position, where he would stay for the remainder of the race. It was McDowell’s second career top 10 at the South Beach track.

Our Motorsports has quietly snuck into being a potential upset winner in the weeks to come. A lot of the credit can go to 2018 NASCAR Camping World Truck Series champion Brett Moffitt, who landed the team its third top 15 to start out the year as well as their second top 10.

With 65 laps remaining in the Xfinity race at Homestead-Miami, Moffitt had just pitted for fresh tires, a factor that was played a large role in the race. In no time, Moffitt drove his No. 02 Chevrolet into the top 10. But he wouldn’t stop there. After another pit stop under caution, Moffitt drove from 19th to 3rd in 7 laps. With just under 40 to go, Moffitt passed race leader AJ Allmendinger for the lead.

Moffitt would be passed by Noah Gragson with just over 20 laps to go but kept the race leader. With less than 10 to go, Moffitt was driving the wheels off to make the pass. Unfortunately, that’s when a mistake was made. The No. 02 made lengthy contact with the wall, cutting down a right rear tire and forcing Moffitt to pit. Thanks to a late race caution, however, the 28-year-old was able to rally for a solid seventh-place finish.

“Once again, the Our Motorsports team gave us a piece to contend for the win.” Moffitt said in a press release. “We had a really strong day with pace, and we did all we could with a loose racecar. I’m really thankful as always for this opportunity with Chris Our and the opportunity to work with Joe Williams and all of the great people that work here. If we keep bringing cars like this to the racetrack, I know we’ll get a win very soon and I can’t wait for that moment.”

It has been a very solid beginning for the newly formed Trackhouse Racing. A week after earning the team its first top 20, Daniel Suarez raised the mark by coming home 15th at Homestead-Miami Speedway, sporting a new look with sponsor Camping World for the first time this season. It was the fifth-year driver’s first top 15 finish since 2019.

In the Xfinity Series, Jeremy Clements brought home his second-straight top 10 with a strong 9th place run. After using some tire strategy, Clements was able to steer in his No. 51 Chevrolet Camaro into the top 10 and stay there late in the race. JJ Yeley also had a strong run, finishing 12th in his No. 17 SS Green Light Racing Chevrolet.

The NASCAR Camping World Truck Series returns after a week off with a stop at Las Vegas Motor Speedway. The uncertainty of these races for the series presents an open opportunity for some underdogs to roam the yard.

The NASCAR Xfinity Series also will head to Nevada for a race at the 1.5 mile track. Look for Moffitt to run well once again. Clements should be one to watch to better his result from the last Las Vegas trip, where he finished 13th. Brandon Brown could also be an underdog who might sneak into the top 10.

That leaves the NASCAR Cup Series to duel it out in the Pennzoil 400 at Las Vegas Motor Speedway. Many will keep a close eye on McDowell to see if he can make it four top 10s in a row to start off the season.

Kept digging all day and brought it home in the top 15!

Checkered is out and @Brett_Moffitt brings the No.02 Chevy home 8th.

“Keep bringing cars like this and we’ll have our time,” BM tells the team. pic.twitter.com/C4OTbAuPSe