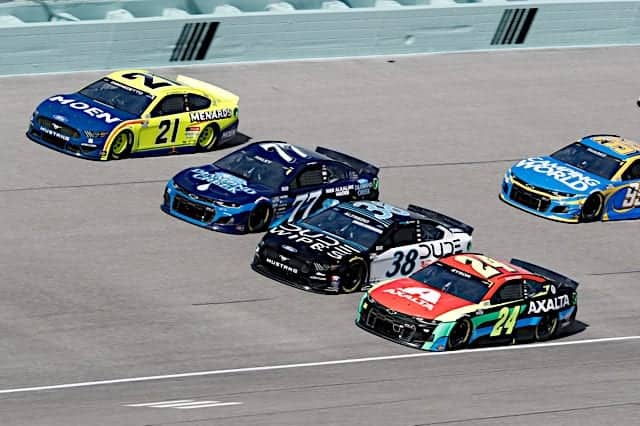 During the first few weeks of the 2021 NASCAR season, start times of races have become a point of debate.  This weekend’s slate of races at Homestead-Miami Speedway featured the same later-than-usual green flag times as the first two races weekends.  Saturday’s Xfinity Series race took the green flag around 4:45 p.m. local time.  The Cup Series race on Sunday began at around 3:45 p.m., wrapping up at around 7 p.m.  Similar late start times have proven to be problematic, especially when NASCAR is facing adverse weather.  But this time, a race through the late afternoon and early evening worked out quite well.

Regardless of where Homestead’s races wind up on next year’s schedule, it would be wise to keep the races in the evening, primarily during the day to night transition.  The track often held events during the evening when it was the site of the season finale for all three of NASCAR’s national touring divisions.  But something felt different about Sunday’s (Feb. 28) race compared to past Homestead contests.  Maybe it was because the championship battle did not overshadow the course of the race.  Or, in NASCAR’s current COVID-conscious environment, perhaps a lack of practice time forced teams to guess which setups would be most effective.  Yet whatever the underlying cause, Sunday’s race featured a complete reversal between drivers who contended early and drivers who wound up finishing in the top 10.  In fact, this abnormally high amount of comers and goers made for the best Homestead race in years.

For several contenders, transitioning to the nighttime conditions proved to be a challenge.  Chris Buescher was the biggest surprise of the early laps, driving to the lead on pure speed and even winning stage one.  The sight of the No. 17 car pacing the field no doubt excited many fans of Roush-Fenway Racing.  But after the sun went down, Buescher plummeted through the field.  He and his team never recaptured their early race speed, ultimately finishing 19th.

Other drivers who ran well during the daytime included Team Penske veterans Brad Keselowski and Joey Logano.  Up to this point, Penske had used some excellent late race strategy to get its drivers to the front of the field when it mattered most.  Logano or Keselowski might have won the Daytona 500 two weeks ago had they not gotten tangled up with each other on the last lap.  And, last week at the Daytona International Speedway road course, both drivers came away with top-five results.  Early on at Homestead, it appeared that the Nos. 2 and 22 would be tough to beat again.

However, neither Logano nor Keselowski were able to keep up with the changing track conditions.  Keselowski fared better; he at least stayed in sight of the top 10.  Logano, on the other hand, fell back just like Buescher did and could not make up the lost ground.  It got so bad that both drivers pitted with 30 laps to go, hoping to take advantage of fresh tires that would allow them to work their way through the field.  Keselowski only got back to 16th, while Logano finished 25th.

The losses of Buescher, Keselowski, and Logano were other drivers’ gains.  Some of the usual suspects populated the top 10 by the time the checkered flag flew.  Kyle Busch struggled with the handling of his car all day but scraped out a 10th-place result.  Kevin Harvick was quick in the opening run of the race, drifted back in the pack in the middle portion of the event, but came back for a top-five finish.  Martin Truex Jr. and Kyle Larson were not particularly fast early, but they picked up the pace as the sun went down.  Both drivers scored their first top fives of the season.

Michael McDowell’s race was similar to Harvick’s.  The No. 34 team started off fast and initially struggled to adjust to the track.  But unlike Buescher, Logano, and Keselowski, McDowell and his team hit on the right adjustments before it was too late.  His sixth-place finish continues what has been an excellent start to the season for the No. 34.

Yet the most impressive comeback drive of the evening belonged to Tyler Reddick.  Considering his success at Homestead in the Xfinity Series, as well as a strong run in last year’s Cup Series race, Reddick was a popular pick to contend for the win on Sunday.  After starting deep in the field and making very little headway during the first two stages it appeared that those predictions would go unfulfilled.  But as the sun set, Reddick rose through the pack.  During the race’s final green flag run, he took the No. 8 Chevy all the way up to second place, ending the race there despite never leading a lap or collecting a single stage point. The finish is a much-needed boost to Reddick’s season after lousy results in the first two races.

It was fitting that race winner William Byron had one of the few cars that was fast all day.  Byron started near the back of the pack and did not make much noise early in the race, but he was a fixture near the front of the field once he got there.  Especially after darkness settled, Byron drove away from everyone and easily claimed his second career Cup Series victory.  Bringing crew chief Rudy Fugle over to the No. 24 team may be just what Byron needed to become a weekly contender for wins.

Above all else, it was nice to see that Homestead did not lose its luster with an early-season, late-afternoon race.  In fact, watching a race at Homestead free of the burdens of constantly checking in on the championship battle felt very refreshing.  The combination of tire falloff, a well-worn surface with multiple racing grooves, and changing track conditions produced a compelling race.  If NASCAR remains committed to late start times, especially at intermediate tracks, perhaps we should hope for more day into night races.  Once the season concludes, Sunday’s race could be among the best of the year.

I was surprised to find this race very entertaining, when I’m usually bored by the season finale at Miami. I finally realized that it was because the entire field was included in the coverage, not just the ‘final four’! I have always known the focusing on the ‘contenders’ didn’t add anything to a broadcast, but it was astounding to me what a difference it made watching the entire field compete. Almost as if I was actually at the track.