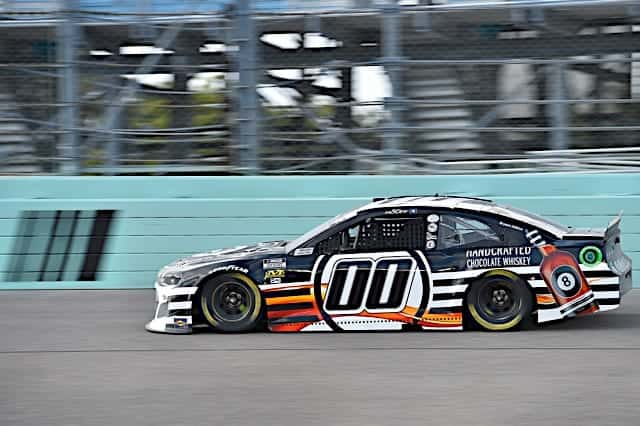 Quin Houff is still finding his footing in the NASCAR Cup Series.

After finishing his first full-time season 33rd in points, the driver of StarCom Racing’s No. 00 Chevrolet believes he’s poised to improve as he and his young team return to tracks together for a second and third time. That track time will be key as 2020 provided no practice and limited qualifying through a year impacted by COVID-19 protocols.

The struggles of his first Cup season came to a head at Texas Motor Speedway, when Houff made a late decision to pit from the outside lane and made contact with both Christopher Bell and Matt DiBenedetto before crashing into the outside wall.

On Feb. 23, Houff and StarCom announced an 11-race partnership with 8 Ball Premium Chocolate Whiskey that debuted on track at Homestead-Miami Speedway on Feb. 28.

Houff also sat down with Frontstretch reporters Zach Sturniolo and Davey Segal that day to discuss how he grew from last year’s mistakes, expectations for 2021 and how he hope people perceive him despite such few professional starts ahead of his Cup Series career. Read the conversation below and see the whole interview with Houff at the end of the article.

Zach Sturniolo, Frontstretch: Quin, you’ve been working at this for the last couple of years now. With last year under your belt, where do you feel like you are right now in your driving career? What lessons did you take out of 2020 and even after these first weeks of 2021?

Quin Houff: Yeah, obviously the list of lessons from 2020 is a very long list. Obviously it [was] my first full-time season last year in the Cup Series, and who knew a pandemic would hit and change life as we knew it? And then luckily we got to go back racing … hats off, NASCAR, to get our full season in, but things were different. We lost a lot of track time and no practice, no qualifying, putting me under the pressure to learn under green-flag conditions, as well as, they didn’t have a notebook of what I liked yet either, so it was a very tough year on us. But we all stayed positive. We all kept our heads up, stayed realistic and made our way through it. Learned from the mistakes, and I feel like we’re better because of it.

Heading into 2021, we got some notes now, and I got some laps at most of these places, and I’m looking forward to going back there and applying everything that we know from last year. It’s very difficult, but this small team believes in me and I have a lot of great people around me that believe in me. And, like we’re talking about 8 Ball, having companies come on board that believe in what we’re doing is very refreshing and gives us that confidence heading into the season.

Sturniolo: Homestead-Miami Speedway starts a whole slate of ovals here to get into the rhythm now of what the spring stretch of the season is going to be like. What does [last] week start for you and for StarCom as you really get into the weekly grind of the of the season?

Houff: Yeah, it’s a fresh reset. My guys back in the shop have been putting in a lot of hard work. We’ve been updating a lot of different things between bodies and have a lot of the same guys back and actually some new additions that we’re pretty excited about. So there’s nothing to put our heads down about at all, just some bad luck. And we have a fresh start. That’s the way you have to look at it.

We’re heading into a fresh start, race three of the season, to turn this thing around. And we finished fairly strong, I believe, in the mile-and-a-half programs in 2020. [We’re] looking to start off there in 2021 as well and get back to some short-track racing as well. There’s no reason to hang your head about anything. It’s a long, enduring race season. Everyone has their ups and downs, and I hope we’re just getting ours out of the way early.

Houff: Yeah, it’s a very steep jump. It’s what every driver [dreams] to do, right? Their ultimate goal is to get into the Cup Series. And with my career, it was very different. The sport is different in the fact that we don’t really have certain ladder systems or different qualifications for every driver of when they can get into the Cup Series. I know there was a lot of controversy with me and how quickly I did it, but it was all about what every driver’s trying to do. You get as many sponsors as you can, you get the budget that you can run, and you try to put your sponsors and yourself in the best seat available. And the ultimate goal is the Cup Series. And when that opportunity came up, I mean, who would say no?

Obviously, I felt like jumping into this deal, there wasn’t any experience there. But I believed in myself, and obviously StarCom and many other companies believed that I could do it. And even through the pandemic, there were a lot of things stacked against me. We just had to be realistic, and that put us under a spotlight for people to scrutinize. But we just had to keep our mindset and our heads straight on our program and what we were going to accomplish, and that’s what we did. We made some mistakes, and we learned from them and didn’t let them happen again.

Heading into 2021, we’re that much more confident in each other and believe in each other. And as far as my performance, how to run these races, they’re very long, but at the same time, I have to fire off better. I have to maintain the lead lap longer, and that just opens up a whole new door of strategies that we can run to advance our position in the result list. I’ve got so many things I learned from 2020 that I know are going to just help me improve our results just from that along with all the other things we’ve been doing.

I’m very eager to get through the season, get rolling and just kind of start to hit our stride. This Daytona [International Speedway] thing and not being able to go to Fontana [Auto Club Speedway] and the [Daytona] road course was thrown in right before the season started. And obviously, with the unknowns of superspeedway racing, it throws things for a jumble. So we’re ready to start hitting our stride and start knocking down some of these races.

Sturniolo: You mentioned it: a lot of lessons learned from 2020. One of the biggest lowlights was the incident at Texas Motor Speedway. I’m curious how, if at all, that changed you as a person or as a driver because there was a lot of scrutiny coming your way, fairly and/or unfairly. I’m curious how you processed that whole situation. What did that moment and the ensuing months after that teach you about yourself and and your persistence?

Houff: It really taught me a lot about myself. This is all God’s ultimate plan, and I know I’m put here for a reason. And I’ve always left it up that way. There’s been many dead ends [that] I thought this was it, and I always took every start as the last opportunity, and, that was just one of those moments. It was a bonehead move. I knew that I had to stand up and admit to it, and I did that. I didn’t run away from it, and I worked with my team to figure out what we can do to never let that happen again. And that’s what we did.

There’s many opportunities in the racecar for a perfect storm to form for you to fail, and it’s up to you at the controls whether or not you fail, and I failed, and I became better for it. But you know, that’s when I really learned in this Cup Series level, the spotlight and the pedestal, if you will, that we’re put on for all these people to scrutinize what you do. And [when] you’re going to be out here for 38 races a year, going as fast as you can with 40 other cars, there’s gonna be mistakes. And I know I’m not going to be the last one to make one, and I wasn’t the first one. That’s just the way I had to look at it.

It was difficult, you know? I was already under a lot of pressure with COVID-style racing, and we were having a good day on top of it. That was really tough on me. But my team held me up, and we all worked together through it, and that’s what it’s all about. All of us just believe in each other and in our program, and that’s really all that matters. I had to just put the blinders on and continue to perform what we needed to do. It was definitely a tough time for me in my career. And I look forward to not having to answer that question, hopefully, with some better things later on down the road.

Sturniolo: How do you want people to perceive you? You don’t get a whole lot of spotlight on you until and unless something negative seems to happen, just being in the equipment you’re in, unfortunately. How do you want the NASCAR fan base and/or your peers to really view you and see you as you’re progressing throughout your career?

Houff: Yeah, like you said, the littlest thing and one of my buddies Corey LaJoie taught me this early: If you get on the plane, he goes, ‘were you on TV today?’ And if the answer was yes, you had a bad day. If the answer was no, you had a good day. So that’s kind of the motto, but it’s to fly under the radar and do what you do quietly, because like you said, if I’m on TV, it’s not usually a good thing.

As far as people getting to know me, if they take the opportunity to look into who I am, where I’ve come from and what I’ve done, I’m really that humble, relatable guy. I came from a small town in Virginia, working in the family business out of high school. I worked in the family business up until I signed with StarCom before 2020. I just feel like I’m that blue-collar guy that’s relatable to a lot of people. I don’t want to be another cardboard cutout or something, someone with a dry personality.

Had a fun blooper from a shoot @DAYTONA a couple weeks ago! What do you say @TeamChevy let’s put turbos on these things. #z00m pic.twitter.com/ASaRERTXZh

That’s kind of how I perceive it. If somebody wants to take a deep enough look into Quin Houff or StarCom Racing and what we do, I really don’t think there’s a reason for someone not to like us. We’re just hard workers. We’re new to the sport, we’re grinders and we’re just trying to get better every week and make our presence better each year in the Cup Series. And now, for them to believe in me to do that as a young driver in the sport means the world to me, and I can’t thank Matt and Mike Kohler and everyone at StarCom enough for giving me the opportunity. It’s been a lot of fun, and I look forward to continuing to do so.