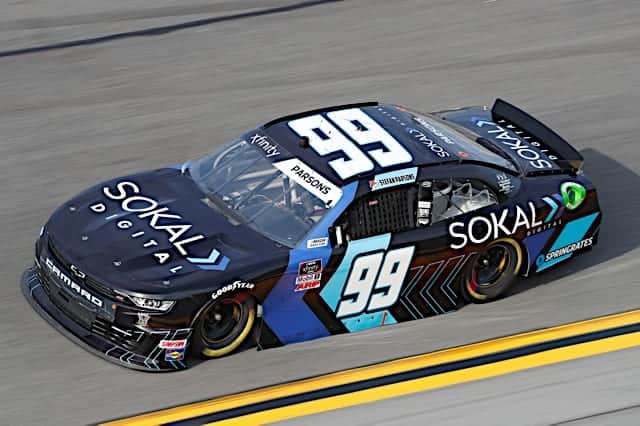 Dogecoin, a cryptocurrency, previously sponsored Josh Wise in a handful of NASCAR Cup Series races. Because of Dogecoin’s popularity as an Internet meme, Wise was voted into the 2014 All-Star Race by fans, particularly those on Reddit.

Wise’s car was owned by Phil Parsons, who is Stefan Parsons’ father.

“Having the opportunity to run a scheme that has an incredible story from my dad’s race team is something I am so proud to do,” Parsons said in a release. “When Josh ran the Dogecoin car in 2014, I was much younger and remember being so excited at the fact that the Dogecoin community and Reddit came together to make it happen. At the time, I also wished it were me in the seat. So to have the chance for Dogecoin to ride along with Sean and me in Las Vegas is a dream come true.”

Much wow. VERY VROOM! @dogecoin joins @springrates at @LVMotorSpeedway with @StefanParsons98 behind the wheel!

Parsons has one top-15 finish at Daytona International Speedway this season in two starts.

The NASCAR Xfinity Series competes this weekend at Las Vegas on March 6 at 4:30 p.m. ET on Fox Sports 1.