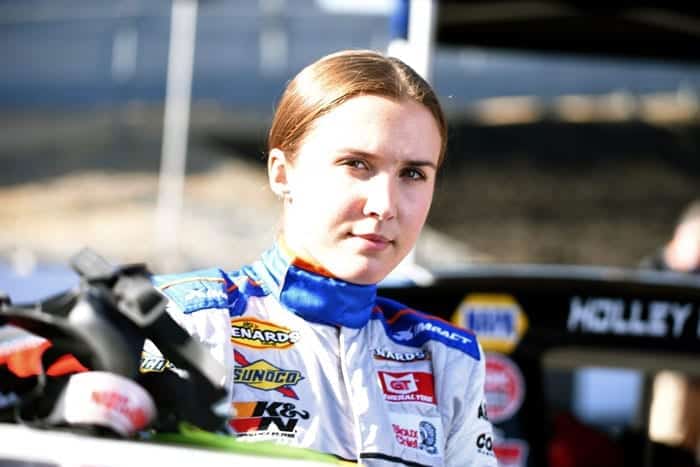 At the young age of 19, Bridget Burgess has been making a name for herself while continuing her family’s legacy in motorsports.

Unlike her mother Sarah, a racer who made her presence known in the off-road circuits, the younger Burgess has her sights set on becoming a full-time NASCAR competitor.

Making her maiden journey on the asphalt arenas last year in the ARCA Menards West Series, Burgess was impressive when considering her circumstances. Racing with only one car in her arsenal, Burgess gained valuable experience with persevering her equipment while taking to the bullrings and paint trading short tracks of the West Coast.

With the 2021 ARCA Menards West Series’ season opener at Phoenix Raceway right around the corner, Burgess has been diligently preparing for the season. Much like Mark Martin’s early morning workout routine, the Tooele, Utah native focuses on her physical fitness right before sunrise.

Determined for long-term success while desiring a path into NASCAR with hard work and dedication, Burgess understands the challenges that face her while remaining optimistic about the journey awaiting her. Recently, Frontstretch caught up with Burgess to get her thoughts on her rookie efforts in the ARCA Menards West Series and accepting the risks that come with competing in motorsports.

Rob Tiongson, Frontstretch: You earned a top-10 points standing finish in 2020 with a trio of top-10 results in the ARCA Menards West Series. What were some of the takeaways from the season that you look to capitalize on for 2021?

Bridget Burgess : Last year was such a great learning experience. I got to learn the process and learn the tracks. With not being in the best competitive car, it gave me an opportunity to learn without the expected pressure to go and win like some of the others I race against.  I’ve now just completed my first full year of racing on asphalt.

Tiongson : As a young driver familiar with the nuances and mechanical aspects of your car, how much of an asset is it for you to be as acquainted as you are with your cars but also drive them given they’re operated by your family?

Burgess : I definitely race with care for the car. I always say to myself, “You need to have a car to finish a race.” I always pay attention to my gauges. I ask myself, “How’s the oil temperature and pressure? How is the water temperature? How does the engine feel off the corner and down the straightaway?”

I always ask myself these questions because it’s the only car I have, and I don’t have a backup car sitting in the trailer. So, I take care of my equipment.

Tiongson : While the 2021 season is approaching, how are you keeping focused and prepared mentally and physically to keep sharp?

Burgess : I keep myself focused and prepared mentally and physically by living day by day as if I’m still in the race season because there is no offseason for me. I’m up by 5 a.m., get on the treadmill, workout for another hour, and get ready to be at the race shop by 8 a.m. and I finish work around 5 p.m.

I come home and keep myself busy by working out more, cleaning the house, or studying NASCAR races. I never have vacations as I am always working and keeping myself occupied.

Tiongson : 2020 was a truly distinct year for our world in terms of a pandemic that’s impacted every country. Would you say it’s been a year where you’ve learned to appreciate things you used to do and what are a few things you look forward to doing when we all get a handle on the COVID pandemic?

Burgess : I have always been appreciative of what I have. When the pandemic happened, it made me realize so much more about how lucky I am. I have amazing people around me who believe in me and help me. Without (team owner) Bill McAnally, I wouldn’t have gone racing last year.

He gifted me the car I drove this year because he knew I would take care of the car and give it my all and return the car in one piece. I’ve also had many other amazing people help me last year and I am so grateful for it.

Burgess : If I was given the opportunity to race the Baja 1000 or Dakar Rally, I would definitely take it just like I would take any other racing opportunity. I have so much focus on NASCAR as asphalt is what I am giving all my focus on.

Tiongson : Risk is a part of the motorsports world and we got a sobering reminder of how treacherous it can be particularly with Romain Grosjean’s crash at the Bahrain Grand Prix. While he was able to walk away, while I understand racers accept the risks involved in motorsports, how do you compartmentalize things so you’re able to refocus to the best of your abilities?

Burgess : I understand there is a risk in motorsports. As a driver, as soon as I have my helmet on and I am buckled in my race car, all my emotions and feelings are turned off. It’s me, my racecar, and a race I will give my all in. You learn to trust your car and spotter, and with the adrenaline, you only think about one thing – the race.

Tiongson : Has there ever been a time when you’ve been starstruck by someone in the racing world and if so, who was it?

Burgess : The first time I’ve ever been starstruck by someone was when I was 15 or 16. And I was in the Axalta suite and I got to meet Dale [Earnhardt] Jr. I couldn’t believe it. I was lost [for] words. But at the end of the day, I realized they’re just people who go racing.

In 2019, I went to a couple of NASCAR Cup Series races with my mom. At every race, I just so happened to be in the elevator or in the same room as a Cup or Xfinity driver and they’re just chill and relaxed. I think it’s cool when they ask questions about my racing.

Tiongson : As we look ahead to 2021, what’s the provisional schedule and plans looking like for you?

Burgess : For 2021, our focus is to complete the full season of ARCA Menards West and if we can fit it in our budget, we will do the road courses on the East Coast.

Tiongson : Fans know that racing is a true passion of yours and you have a talent behind the wheel. But what’s a few hidden talents or skills that you feel would surprise folks?

Burgess : Three things outside of racing that I’m into are baking, designing houses and buildings, and I’m also into horses. In 2014 and 2015, I worked at an old ranch and I was a horse groomer and I showed horses. It’s something I love but I don’t have time for it anymore.