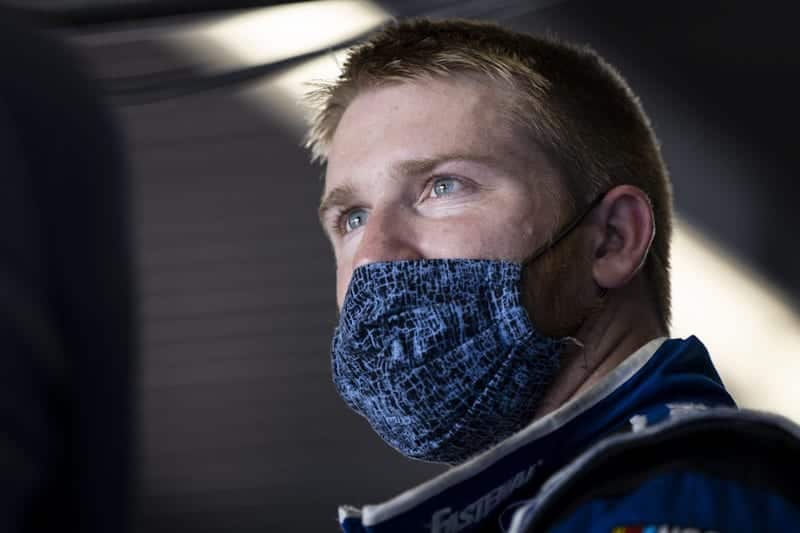 If the 2015 Xfinity Series champion drifted from your mind over the last five years, he surely got your attention Sunday (Feb. 28) in the NASCAR Cup Series race at Homestead-Miami Speedway.

The 28-year-old driver started 12th and took the lead from Brad Keselowski on lap 53. Buescher wound up winning stage 1 and leading 57 laps, the most in Buescher’s Cup Series career.

He ultimately finished 19th after a bad mid-race restart caused him to fall outside the top 10.

But for two stages, Buescher performed in a way not seen by Roush Fenway Racing on an intermediate track since Carl Edwards led 68 laps at Atlanta in 2013.

“I know at the end of the day our finish didn’t reflect what kind of day we had, but we had such a strong showing in the first half of the race,” Buescher told Frontstretch. “Honestly, it’s the most relaxed I’ve been in a race car in a really long time.”

When Buescher left JTG Daugherty Racing to return to Roush in 2020, a surprising result of a contractual loophole, it did not go well.

Paired with Luke Lambert at crew chief, Buescher finished third in the Daytona 500. He then tallied up finishes of 14th, 16th and 17th.

Buescher and his competitors returned to racing in May in a world without practice and qualifying. The No. 17 team felt it.

“It was a very difficult first season,” Buescher said. “We had no notebooks built up. We had no experience together, didn’t know what changes we were looking for. And in general, it was really hard.”

“Fast-forward to 2021, we’re sitting here thinking, ‘All right, we’re going to go back to practice, we’re going to be able to start running through a lot of these big changes that we wanted to and never had the opportunity to before,'” Buescher said, “and obviously we’re still in the same situation.”

Despite the circumstances, Buescher believes he’s in a better working environment than the one he left in 2016 for Front Row Motorsports.

“I think (Roush Fenway has) worked hard to try and create a healthier mentality of a team atmosphere of more, ‘it’s all of us in this together,’ versus ‘you do your job and I’ll do mine,'” Buescher said. “I do feel like that has improved a lot and was one of the biggest things that I noticed when I came over last year.”

Buescher said the old atmosphere wasn’t “everyone for themselves by any means,” but that “teamwork wasn’t as good” as it could have been.

“Even sitting in on Cup meetings when I wasn’t in the Cup Series, that was interesting to see some of the inner rivalries that ultimately were not healthy,” said Buescher. “You think it creates competition, right? But at the end of the day, all you have is your teammates to learn from. And so you got to make sure that everybody’s on the same page and trying to pull the rope in the same direction. That’s something that I’ve seen get a lot better from what I remember it. ”

Now its flagship driver is Ryan Newman, who is in his third year behind the wheel of the No. 6 Ford.

“He’s very detail-oriented,” Buescher said. “I think that’s something that I have tried to pick up on a little bit and really nail down a lot of what we’re trying to talk about in our debriefs and what we’re hunting. Very specific on what he’s after. That’s helped me try and be a little bit less broad in my characterizations of our racecar and try and give a little bit more specific answers to try and dial in from there.”

After Christopher Bell won his first Cup Series race on the Daytona road course, he said it was “really fun to be relevant again” after his winless rookie season.

Buescher, who hasn’t won since his surprise victory at Pocono Raceway in 2016, isn’t concerned about relevancy after Homestead.

With tracks like Las Vegas Motor Speedway, where he finished ninth last fall and will start 18th Sunday, and Phoenix Raceway and Atlanta Motor Speedway looming, Buescher has been buoyed by his Homestead run.

“It’s a start,” Buescher said. “We came into the season knowing that we had worked on a lot of different things. But we have no way to measure it, we have no way to tell if it really improved or not. And so Homestead was the first chance for us to say look, ‘This did work. This did get better.’ …

“We need the next couple of weeks to get a good measure of where we’re at, but yes, Homestead was a good start in the right direction and makes us feel confident about what we got going on.”