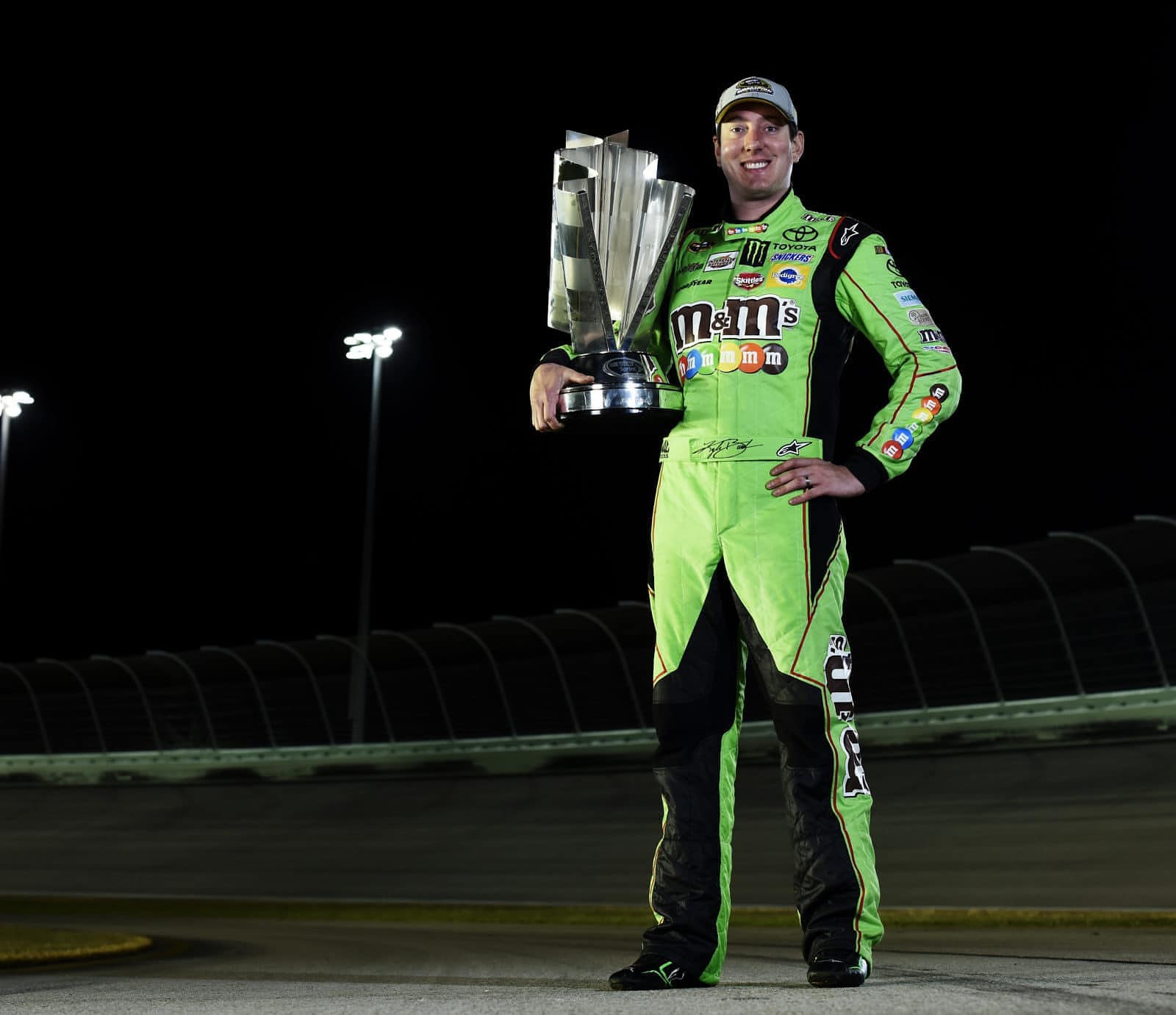 This past weekend’s racing at Homestead-Miami Speedway was highly praised by fans, media members and racers alike. The racing was solid on both Saturday and Sunday. We saw comers and goers. We saw epic battles for the lead and the weekend sure had its share of drama.

Tire strategy and tire management were keys in both races, and when it was all said and done, a 1.5 mile track was looked at as one of the best tracks on the current NASCAR schedule. For 18 years, NASCAR ended its season at Homestead-Miami Speedway and for 16 of those years, the final race of NASCAR’s playoffs occurred at the facility.

Yet there are a variety of reasons why that is no longer the case. Our writers Amy Henderson and Luken Glover debate on whether NASCAR should return the championship race to Homestead or keep it elsewhere.

Bring Me Back Miami, Baby

While Homestead-Miami Speedway is not a place where you are going to see a lot of crashes, it is one of the most unique and entertaining tracks on the schedule. Only a couple of other tracks present an equal amount of lane options that we see at Homestead-Miami. Whether a driver wants to rim-ride inches from the wall or be a bottom-feeder right against the apron, there are many routes to success and feeling the car out.

The venue in Miami also presents a great opportunity for the championship race. While the expansion of NASCAR in America is great, the southern roots of the sport find great shelter in Miami. The Florida weather in November, the palm trees, and even a lake in the middle of the track provide a great fan experience. When we are allowed to have packed stands again, the Miami track can host more than Phoenix with a capacity of 55,000, compared to Phoenix’s 42,000.

When you look at the racing at Homestead-Miami, it presents great speed that fans love. The 2020 finale at Phoenix presented good racing, but it cannot compare to the speeds we see in South Beach. The day to night transition we see at Homestead-Miami is one of the best in the sport. As the sun sets to give us great views, the teams are challenged to adjust to day-to-night conditions that the track faces. Short run cars begin to adjust their lines and long-run cars can settle into their own groove. In the daytime, more drivers are going to experience the bottom and middle lanes to make passes and slide attempts; but when the night settles in and handling begins to go away, many cars migrate to the top.

It is also a great way to see drivers’ styles. While one guy is trying to win the championship from ripping the fence, the other is testing the waters down low. If a driver faces a situation like we saw with Jimmie Johnson in 2016 or Chase Elliott in 2020 where they start from the rear, there is a greater opportunity to make passes at Miami than there is at most tracks. It depends on how the car is set up obviously, but the speeds and traffic at a place like Phoenix can hinder progress. While we want to see drivers pushed the biggest challenge there is an opportunity at Homestead to display talent that we wouldn’t see at other tracks simply because there are more options on Miami’s mile-and-a-half.

Many tracks would present great venues to hold the final fight for the championship trophy. Phoenix’s new fan experience is one of the best in the sport. But the sights, sounds, and racing at Homestead-Miami are hard to match. It is not going to be a wreck-filled race usually, but it will provide great racing that push drivers to the test. – Amy Henderson

No Track Should Have a Monopoly On the Title Race

Homestead-Miami Speedway should not perpetually host the NASCAR season finales.

Race fans, you’re not wrong on either point. Homestead-Miami, thanks in part to its older pavement and true-oval layout (the progressive banking works there better than any other track), has hosted some good races recently, certainly better than some of the other 1.5-mile tracks have been able to do.

Last Sunday’s (Feb. 28) race, despite the margin of victory, was fun to watch. The day-night format worked, again better than it does at some other tracks, even Charlotte Motor Speedway.

But the rub is this: the racing alone shouldn’t determine the final race of the year. There was a time when it did – before HMS, Atlanta Motor Speedway hosted the finale for years and there were some good races there, too. But there’s simply too much riding on one race for it to be at one track anymore.

Under the current championship format, the finale alone determines the sport’s champions in all three national divisions. Sure, the races leading up to it sets the field, but it’s one race for a title. So, while we can always hope it’s a good one, it always has to be fair. And that means it can’t stay at a single track.

It shouldn’t really stay at any track for more than a year before moving to another track, two years at the most.

Face it: different teams have advantages at certain tracks. One might dominate where horsepower reigns supreme; another can finesse a flat miler, still another can make a short track look easy. Keeping the finale at one track year after year hands the advantage to the same teams and drivers year after year.

Under a full-season format or even the old 10-race Chase format, that didn’t matter as much. Teams had time to make up for tracks where they struggled, and others would stumble somewhere else, but it all came out in the wash. Not anymore. There is no making sure you had a big enough lead that even if your driver was terrible at Atlanta or Homestead, he could still win a title. There’s no making up for last week, and there’s no making up for this week next week.

It’s too much emphasis on one race to begin with, but keeping it at one track doesn’t help. Instead, NASCAR needs to rotate the finale through as many different tracks as it can before returning anywhere.

The finale should move between every available oval other than Daytona International Speedway or Talladega Superspeedway, and leave the door open for at least some of the road courses as well. The superspeedways are too much of a crapshoot to determine the champion – under the old format, again, a contender could finish 30th and win the title.  Under the one-race title, that doesn’t play so well.

The late ending of the racing season could make a couple other tracks iffy – even Martinsville Speedway s pretty cold in early November, so that could take New Hampshire Motor Speedway and Pocono Raceway off the table. (Maybe. The season finale at New Hampshire in 2001 ago had decent weather, but that’s not normal). Bristol Motor Speedway could be iffy as well in its mountain setting. Some road courses present a question mark as we haven’t seen a Cup race there yet, so we’ll reserve judgement on those.

Still, rotating the finale among the non-superspeedway ovals and a couple of the road courses would provide enough different tracks to satisfy every team and most fans.

Two, it gives fans in different regions the chance to attend the title race without having to travel as far as they might now. Allowing more fans the opportunity to attend such an important race is only a good thing—maybe they bring a friend or three next time if they have a good time.

So, while Homestead can put on a decent show and has hosted some memorable championship races, it should be just one of many tracks doing that. Its turn would come, but so would everyone else’s. – Luken Glover

As long as NASCAR insists on having a Championship race, it doesn’t matter where they hold it. There will be four cars racing on the track and 35 extras out there with no speaking parts.

rg72 has that right! I think the biggest reason the race was so entertaining is that EVERY car on the track was running as hard as they could. No one was staying out of the way of the title contenders because they didn’t want to ‘interfere’ with a title winner. The TV coverage was also better than usual because they actually covered more of the cars in the field instead of just the ‘contenders’. One of the big problems with having a title come down to just onw race, is that it deprives the fans…and most of ‘the rest’ of the field, a true race. I had no idea the racing at Miami could be this entertaining!

100% accurate. You know NASCAR tells all the other teams to not interfere with the championship 4. Honestly I miss the original 10 driver 10 race chase. Keep the stages and a real points race. Make the season and post season competitive and that points actually are relevant. They don’t even discuss them anymore at the end of the race since honestly it doesn’t matter until the playoffs begin.

If they have to keep a championship finale id prefer the race to be 400-500 miles. Make the final race long, tough and grueling just like the 36 race season. There would be a “little” more strategy in a longer race. More green flag racing potentially with comers and goers.

A 500 mile Homestead–Miami race would remind me of my youth watching the finale at Atlanta of 500 miles. I miss those days of spending my entire sundays watching a race haha. I’m only 30 and I feel old now.

I agree with the other comments. Whatever track has the final race will never have a good race. As long as 36 guys are just trying to stay out of the way and only 4 guys are racing, the track will never be able to shine.

Like the other comments, the last event is a four car show and the other cars might as well pull into the garage coming to the green . That way they won’t have to get out of the way of the chosen ones. But Clayton, like everyone else, knows that too.

Upon further review the last event should be a restrictor plate event at Daytona Speedway. That way the chosen four can lead the event for 400 miles and the rest of the cars can drop back for a staggered start and have their own battle for position. Guess what the TV viewer will see! It would almost be a reason to see it live.

Whoever thought watching a driver win by over a football field length after leading most of the race was exciting needs their head examined… The Xfinity race was good but the Cup race was just plain boring… And I’m trying to be nice… You want excitement? Put the championship race on Martinsville or Bristol. There’s excitement…