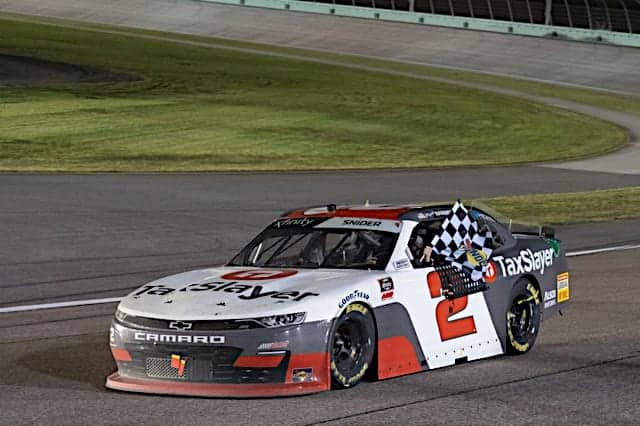 Who won the NASCAR Xfinity Series race at Homestead?

Last Saturday, everybody knew who won the Contender Boats 250 at Homestead-Miami Speedway in the NASCAR Xfinity Series.

Myatt Snider was able to survive two overtime restarts and beat a hard-charging Tyler Reddick on the high side to prevail in the race.

Snider is the first Chevrolet driver to find victory in the NASCAR Xfinity Series in 2021. And with Ty Gibbs being part time, Snider has stepped up in the young season to be a contender to defending champion Austin Cindric.

Speaking of Cindric, he’s really seemed to see some bad luck recently at Homestead. The Team Penske driver led the most laps of anybody in the field on Saturday and really seemed to dominate, having the most speed by virtue of having the fastest lap time. Sadly, Cindric ended up only finishing fifth. No driver has scored more points over the past three races at Homestead than the series points leader, and only last year’s race winners Chase Briscoe and Brandon Jones have a better average finish in that timespan.

At least Cindric parlayed his dominance into a top five finish and didn’t wreck late. AJ Allmendinger led the second-most laps on the night with 45 but spun on the first overtime restart and finished a disappointing 14th.

It has not been an easy road for Snider, who was the NASCAR Camping World Truck Series Rookie of the Year in 2018 before losing his ride in the offseason. Snider was unable to acquire a new ride in America and instead jetted out to compete in the NASCAR European series, in which he seemed to struggle somewhat, failing to win.

In 2020, Snider returned to America to drive for Richard Childress Racing in NXS competition, but only for a handful of races. Snider filled out the rest of his schedule driving the No. 93, struggling to do much with the Reaume Brothers Racing-operated ride.

This year, Snider is with RCR again, but this time in a full-time capacity. With the pressure off for the next 23 races before the playoffs, it’s going to be interesting to see what this driver and team can accomplish this season.

What else happened at Homestead this past weekend?

Outside of Snider, the biggest story to me coming out of last Saturday’s race was the performance of Our Motorsports.

The two car team really seems to have made a big leap this past winter. Brett Moffitt isn’t running for points in this series, but he spent a lot of time near the lead at Homestead and finished seventh. Reddick almost won the race, but settled for second before being disqualified in post-race inspection due to the minimum ride height rule.

Our isn’t competing for a driver’s championship. But this outfit can still contend for wins and the owner’s championship. It also really speaks volumes about the health of the series, with a pretty competitive team starting to really make their stand a year in.

Chris Buescher and Roush Fenway Racing also had a very interesting early run in the Sunday Cup race, with Buescher leading 57 laps and winning the first stage before fading as the sun went down. With no practice, it can be really hard to gauge whether Roush is actually good or the No. 17 just had a fantastic car unloading. Buescher will be one to watch this weekend at Las Vegas Motor Speedway to see just how this vulnerable Ford team backs this up.

Can anybody stop the Fords at Las Vegas this weekend?

Las Vegas really has seemed to turn into a bit of a hotbed when it comes to NASCAR drivers, hasn’t it? NASCAR Cup Series champions Kurt and Kyle Busch hail from Sin City, as does NXS driver Riley Herbst and former NASCAR stars Brendan Gaughan, Spencer Gallagher and Dylan Kwasniewski.

Part of it comes from having such a visible short track on the Cup track’s property. The Bullring is a unique local track in that the big track was built around it about a decade after it opened. This ensured that Las Vegas had at least some community of race fans prior to the first big motorsports event there.

This track has always been a Ford playground, with the blue oval having won half of the Cup races there. Team Penske in particular has had a lot of success, with the organization winning at least one Cup race at this track each year since 2016.

The Penske-affiliated Wood Brothers Racing could surprise this weekend. Matt DiBenedetto brought the No. 21 Ford home second in both Cup races last year, and with such a poor start to the season for this team (a miserable 34th in points), that team has to start picking up the pace before it’s too late.

What does this Camping World blitz mean long-term?

It has been a pretty good week if you’re an independent NASCAR Truck Series driver.

Marcus Lemonis, the CEO of series title sponsors Gander Outdoors and Camping World, has agreed to pick up the tab for no less than 10 unsponsored trucks on Friday night. While this is a good faith buy by Lemonis, and includes sponsorship of independents such as Norm Benning, it doesn’t indicate that the series is healthy by any stretch of the imagination.

While there are plenty of reasons as to why so many big name Truck drivers just don’t have sponsorship right now, not the least of which being that their fathers don’t have a net worth of nine figures, one that really isn’t being mentioned in Twitter debates or thinkpieces is how the series is currently perceived, and what its teams are facing.

Trucks are running a lot of triple-header weekends this season, usually on Friday nights. This is because there is now just one NXS standalone race on the schedule. It can be hard to attract week-to-week sponsorship to begin with in the secondary series, but so often the Trucks are going to be labeled by potential advertisers as a very obvious third wheel, fairly or unfairly.

And because there are 40 trucks, 40 NXS cars, and 40-ish Cup cars starting almost every weekend to near empty stands, that means that the smaller Truck teams just don’t have access to so many sponsors. The smart money is that this is why NASCAR is trying to limit Trucks and NXS to 36 starters per week respectively, as that means eight less teams vying for sponsorship.

Really the only way to solve this problem would be to make the series more unique. Cup just took dirt track racing exclusivity away from them; this series desperately needs to stop having so few standalone events and instead branch out. Why run Pocono Raceway when the track owner also owns South Boston Speedway? Doing more standalone events will increase costs on these smaller teams, but it may be the way that this series can survive long term.