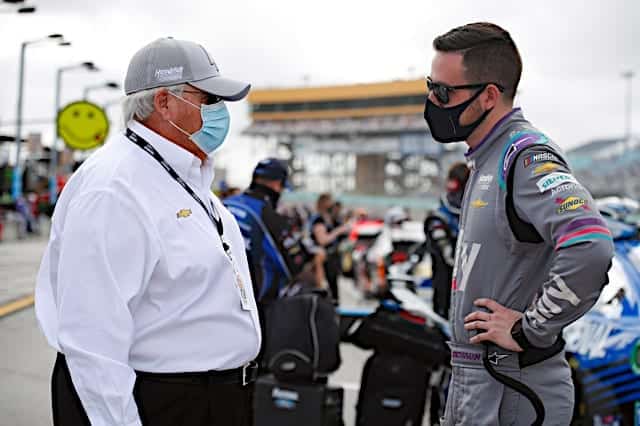 Did You Notice?… NASCAR Hall of Famer Jeff Gordon retired in November 2015 at Homestead-Miami Speedway with a shot at the Cup Series championship. He was 44 years old. Just five years later, William Byron trounced the field at that same track Sunday (Feb. 28) to take Gordon’s former No. 24 car to victory lane at age 22.

Welcome to the NASCAR youth movement Hendrick Motorsports embraced. Byron’s win was the second in his last 14 races, and on the heels of 25-year-old teammate Chase Elliott earning the 2020 Cup championship, Chevrolet’s top team is back on top of the stock car world once again.

“After the first win, I think what clicked for me was the hunger to taste the same feeling,” Byron said after doubling his career total. “How exciting it is to win and what that means to the guys around you. I think once you get that taste in your mouth, it’s hard to – you can’t really get rid of it.”

That’s the problem for a lot of aging, big-name drivers feeling the heat of fresh blood breathing down their necks. There’s been just one winner (Michael McDowell) in the sport’s top three series thus far is over the age of 26.

But it’s Hendrick, the New York Yankees of NASCAR, at the forefront of generational change. At the time of Gordon’s retirement, the average age of their four-car team was 40 years old. Now? Kyle Larson is the old man of that quartet at age 28. Alex Bowman (age 27) won the pole for the Daytona 500 and challenged deep into the playoffs last year. Sprinkle in Elliott and Byron and you’ve got a team contending for the next decade-plus.

Give owner Rick Hendrick credit, investing in his team’s long-term future while absorbing short-term cost (0-for-12 in Championship 4 appearances from 2017-2019). He even knew when to shuffle head wrenches, promoting seven-time champion Chad Knaus to Director of Competition while bringing in Rudy Fugle (an old man at age 36) to crew chief Byron this year.

In just three races, they won.

“It definitely was the right opportunity,” Fugle said Sunday. “I wanted to prove I could do it at this level. We want to do it a whole lot more.”

Sounds like NASCAR stars from the past decade like Kyle Busch (35 years old), Brad Keselowski (36), Martin Truex Jr. (40), Denny Hamlin (40), Kurt Busch (42) and Kevin Harvick (45) could have their hands full. All of them but Hamlin have won at least one Cup title; it’s the remaining list of active Cup champions sans Logano (30).

Yet all of them are suddenly sitting on the back burner, at least for now. Isn’t it funny how quickly the script can flip? At the time of Gordon’s retirement, only one driver (Logano) made the 16-driver playoff under the age of 30. Three races into 2021… we’re guaranteed to have at least two.

The question is, how many more. Can Chase Briscoe win as a rookie? Will Tyler Reddick one-up his second-place finish at Homestead? A few more postseason surprises and one of the big names above is going to miss out.

Did You Notice? … What gets revealed when unfamiliar names find their way to the front of the pack? Michael McDowell was asked this week if guys are racing him a little bit harder now that the No. 34 team has become a threat. His answer was basically yeah, selectively, as joining the NASCAR country club up front doesn’t come with automatic friendships attached.

“I won’t throw out names because I don’t want to turn it into that,” McDowell said. “But I literally saw a driver wave another driver by and then race me for the next seven laps like it was the last lap.”

The truth of it is other than Ryan Newman these days, not every Cup driver gives 110 percent on every lap. They’re like oh, I like this guy, or I need to take it easy on equipment so I’ll let someone drive by without a fight. But then another car comes along that they don’t know much about. Or maybe that driver made contact with the other one at a race a few weeks back. Suddenly, both cars are racing tooth-and-nail with the type of effort that’s subjective based on personality.

It’s the type of situation that makes NASCAR unique among major sports. It’s also inherently unfair. Would a baseball pitcher, up by one run, throw softballs over the center of the plate to a cleanup hitter just because they’re friends? The sport already has enough of these “friendships” in the form of multi-car organizations where drivers play it safe around their teammates. The danger of a 1-2-3-4 finish where no one tries to pass each other in the name of “team orders” seems precariously close at hand.

So drivers adding whether or not Johnny was nice to you during the week into their thought process? It makes NASCAR more wrestling and less athleticism. But it’s happening more and more these days with a driving corps financially comfortable and increasingly insulated due to the realities of COVID-19 restrictions.

what’s happened at hendrick happens every 10-15 yrs. older guys hang up the helmet and new come in. heck i remember when labontes, jarrett, wallace, rudd, martin and some dude named earnhardt were the young guys.

logano is “old” considering he’s be in cup for a while now as he got an early start, as did kyle busch.

grason needs to realize that he might be good, but someone is always better than him, and that the racing gods are ugly to argue with at times. he needs to race smart and mature. just cause he drives for jr motorsports just means he’s got a good xfinity ride. jr motorsports has never said they’re going cup racing. and the team they feed drivers into is fully stocked with young drivers. his temper will end up getting him parked like the busch brother’s did them. with the purses strings in corporate america tightening up, the sponsor dollars are something that needs to be looked after all the time. if the driver they sponsor has temperament issues, the team owner can only smooth things over so many times before they think about taking their money somewhere else.

imagine that, some drivers not always giving 110% effort. color me surprised!

elliott will be fine. he just has to find the balance of champion duties and competitive racer. it’s happened to other as well.

Good point about Gragson, last year during a race if I remember properly , Earnhardt said he was going to have a talk with him about his driving. Does Earnhardt really own that team or is really own by Hendrick?

jr and kelly own the team with support from hendrick

Remember “The Young Guns” promotion from 20 years ago? Here we are again.
It happens as sure as death and taxes.

Drivers racing some other drivers harder than others isn’t anything new either. It’s human nature. You like some people, you dislike others, and you owe some paybacks.
It happens as sure as death and taxes.

Good point about Gragson, last year during a race if I remember properly , Earnhardt said he was going to have a talk with him about his driving. Does Earnhardt really own that team or is really own by Hendrick?

I find it amazing that three races into the season, some “experts” like Tom Bowles are already predicting future doom and gloom for any of those who haven’t won yet. Let’s see who’s on that list: Elliott, Harvick, Hamlin, Kyle Busch, Truex, Logano, Keselowski, Blaney, Larson, Bowman, I guess they should all quit right now.

As for Gragson, I’ll say it again. He thought he could play his sponsorship and fleeting popularity into a Cup career. He thought no one would notice the lack of results. If you can’t win a race with an 8-second lead with 3 laps to go, maybe you don’t deserve to win.

My mom is a big fan of Carl Edwards though

I love the Sadler family though

The cream will rise to the top. It always does. Like him or not, think Tom Brady.

Not to steal anyone’s candy, but I remember commenting when Hendrick hired Kyle Larson late last season that HMS was well-set for the future with young, talented drivers for all of their teams. Am I a visionary? No, but I did stay at a Holiday Inn Express….

Was Motel 6 filled up? Do you save with Geico?

I think that was pretty obvious to everybody. So no, you’re not a visionary.