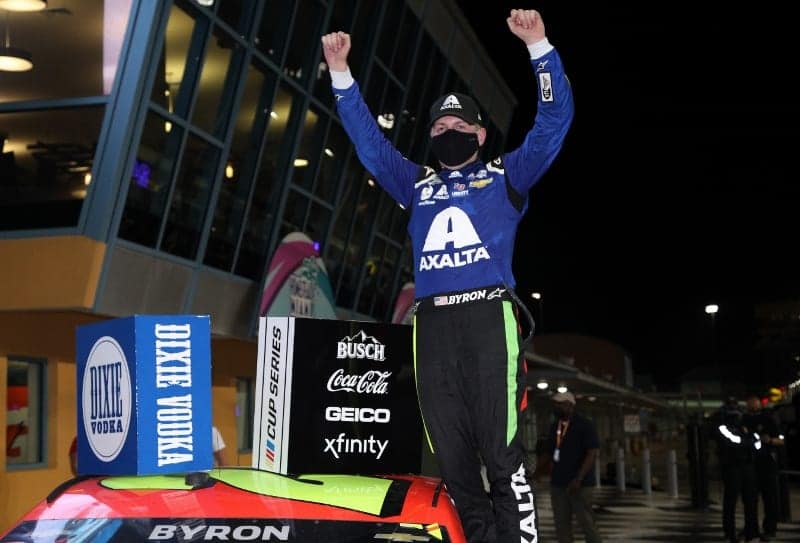 Luken Glover: At this moment I am buying it. One of the biggest underlying stories of the preseason was the reunion of William Byron and crew chief Rudy Fugle. Why is that pairing so special? Well, just five years ago, the pair won seven races together during the 2016 NASCAR Camping World Truck Series season. Fugle had never been on top of the box for a Cup team as a crew chief. Just three races in, he’s already a winner. If this pairing finds the magic consistently from 2016 and Homestead-Miami Speedway, look out.

Zach Gillispie: Let’s not go that far. Homestead is a track at which Byron has been quietly stellar. He’s picked up Homestead wins in the Xfinity and Truck series. While it is promising that he is showing early might on mile-and-a-half configurations (something Byron struggled at in 2020), it is way too early to tell if Byron can stay consistent. While his victory was no fluke, calling him a Championship 4 driver is a bit far-fetched.

Josh Roller: I’m selling. We’ve started the 2021 season with three wins by non-heavy-hitters in the Cup Series, and that is going to change. Byron will eventually be a star in the series, but that day hasn’t arrived yet.

Jared Haas: Buy, but not the whole house. The race at Homestead proved that Hendrick Motorsports improved the whole team at 1.5-mile tracks this year. Three Hendrick cars finished in the top 10, with the only one outside the top 10 being Chase Elliott. Byron is not a Championship 4 driver, but he has a shot of being in the Round of 8. If Byron can reel off four or five more wins, he would be a favorite for the Championship 4.

What do you attribute the parity across Cup and Xfinity winners to?

Roller: For the Xfinity Series, it is a mixed bag of rules package, tire allocation and dumb luck. Austin Cindric could have two wins and Noah Gragson one. Or it could be a Cindric, AJ Allmendinger and Gragson trio of winners. But ultimately it was tires that decided Saturday’s race in the Xfinity Series. In the Cup Series, it is the same three things, but add restart roulette to the bag. In the Cup Series, the restarts are so wild and air is so important that if Tyler Reddick didn’t lose so many positions on the restart, he’d be the winner and Byron at Homestead.

Haas: Mostly coincidence. The Fords worked well especially getting on pit road in the Daytona 500 to get that win. For the Daytona International Speedway road course races, the dominant cars in both the Cup and Xfinity series took the win. The only parity that is not a coincidence is the Chevy performance last week at 1.5-mile tracks. Last year, Chevy led 30 laps at Homestead, with only Elliott and Reddick leading laps. This year, Chevy lead 112 laps at Homestead. At 1.5-mile tracks last year, Chevy drivers who won did not lead more than 30 laps. Homestead proved that Chevy can have a dominant car score a victory at a 1.5-mile track. On the Xfinity side, it helps the Chevy that someone named Chase Briscoe is not in the field.

Gillispie: What has happened? We’ve got Michael McDowell winning the Daytona 500, scoring three straight top 10s and sitting fourth in points. Cory Roper led 90% of the last lap in the Daytona Truck race. Jordan Anderson came from nowhere to finish second there. Chris Buescher won a Homestead stage. Our Motorsports is flying in Xfinity. Christopher Bell won at Daytona’s road course. Bill Lester is coming out of retirement. At the rate we are going, Ricky Bobby will show up too. The only thing we can blame this on is 2020, like everything else, because it sure as hell doesn’t make any sense.

Glover: There has been a recent parts ban that definitely could be a factor. Another thing is that these teams are finally figuring out the rules package. In 2019, many expected those who had experience with the Xfinity Series to step up in mid-pack equipment. Now they have caught up to the car, and it is showing. Personnel changes also play a big role. I can’t help but think the promotion of Jimmy Fennig to executive vp of competition has played a big role at Roush Fenway Racing. At Richard Childress Racing, the new Chevrolet engine has advanced its cars, and Andy Petree’s experience has caught up as well in the vp of competition role. The parity we have seen is great and has made the beginning of this season one of the most exciting ever.

After three Cup races, who should be more worried: Matt DiBenedetto or Ryan Blaney?

Gillispie: Joey Gase has more points in one race than Matt DiBenedetto has in three. That should tell you something.

Glover: DiBenedetto. The first two races were both a superspeedway and a road course, so those can’t dictate a whole season. Ryan Blaney has never been great at Homestead aside from last season. It has been noted several times that DiBenedetto will be job searching for a ride in 2022. He needs all of the results he can get. Blaney seemed to be getting stronger as day turned to night, but DiBenedetto never seemed to settle in. He’s heading to Las Vegas Motor Speedway, where he earned two runner-up finishes last year. He’ll need a strong day there this year as well.

Haas: DiBenedetto. Both the Nos. 12 and 21 teams should be concerned about their slow starts, though. Blaney has a hill to climb in points with him being 22 points behind 16th, but that’s manageable this early in the season. DiBenedetto is near the bottom of the points standings and is almost a full race behind 16th. Jamie McMurray, Gase and James Davison are all ahead of DiBenedetto in points and they haven’t even run the full season. Because DiBenedetto is in a contract year, he has to perform well to attract an offer for the 2022 season. If the bad runs continue, he might have to take a deal with an Xfinity team in 2022.

Roller: DiBenedetto. With Brad Keselowski only receiving a one-year contract, I felt that, despite what was announced, DiBenedetto had an opportunity to retain his ride at Wood Brothers Racing, leaving Cindric going straight into the No. 2 Ford at Team Penske if Keselowski didn’t wow everyone this season. From a fan base perspective, keeping DiBenedetto in the No. 21 would be a popular move. If he had a solid top 16 first half of 2021 and Keselowski didn’t step his game up, Keselowski would have been the one looking for a ride in 2022. But DiBenedetto has a high hill to climb now, and it may take a victory or two to get him over it.

If the Xfinity Series has a third-straight first-time winner this weekend, who would you expect it to be?

Haas: Ryan Sieg. RSS Racing continues to develop its team from mid-pack to that can score top 10s. Sieg has three top 10s in the Xfinity Series at Las Vegas.

Roller: Daniel Hemric, as he has shown speed this season. Plus, four of his seven career Xfinity Series second-place finishes have come at 1.5-mile racetracks. His day is coming; his team will have to find a way to beat Cindric and Gragson, but it is capable of doing just that.

Glover: Hemric. As he has said before, this is Hemric’s first turn-key opportunity to win right off the bat. He has shown his typical consistency that makes him desired in the garage. Three top 10s and two top fives have him sitting solid right now. However, he needs to win. Last spring, Hemric drove from midpack to the top five in less than 10 laps when a mechanical issue caused him to crash. In the playoff race in Vegas, Hemric finished third. With a better Joe Gibbs Racing team, I expect Hemric to be in the decision at the end.

Gillispie: Hemric is the easy pick, but what about Jeb Burton? The Virginian has very quietly scored three top fives in as many races, and he has always been sneaky good on large ovals when he has been in good equipment. Kaulig Racing showed some real speed last week, so look for Burton to get up front.

I can’t wait for the usual suspects to start winning, so these prognostications based on three races, including the Daytona crapshoot, can be put to rest.