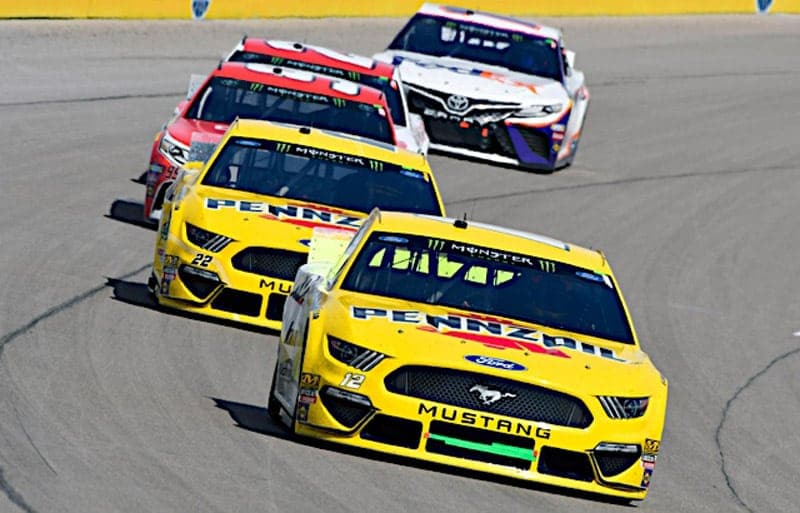 Whenever Las Vegas is pictured in movies, photos, print or a backdrop for the latest TikTok, there’s one consistent theme: Excess.

Everyone flocks to Sin City with at least a small hope of getting lucky, hitting big on a slot machine or roulette table and enjoying their spoils with a night on the town. Veteran journalist and Frontstretch’s own Steve Waid spoke to that very imagery in the start of his “Waid’s World” column on Mar. 3.

As a tourist destination, Las Vegas presents itself as an opportunity for the everyman to live their best life – if just for a few expensive nights. If something is worth doing normally, it’s worth doing big on the Strip.

But there’s a trick to the entire system. Under the surface lies a universal truth: the house usually wins. If they didn’t they wouldn’t stay in business for long. More people go home poorer than richer after their trip to the Nevadan staple.

The NASCAR season has opened with something resembling a lucky night of gambling on the Las Vegas strip so far. Coming off a year where the regular season was largely dominated by just two drivers in Denny Hamlin and Kevin Harvick, the 2021 calendar has opened up with surprises in both the NASCAR Cup Series and Xfinity Series.

It all started when Michael McDowell scored a statistically improbable — though wholly deserved — victory in the Daytona 500. Things ramped up on the Daytona International Speedway road course the following week, when Joe Gibbs Racing prospects Christopher Bell and Ty Gibbs each won their first races in their respective series – Bell in Cup, Gibbs in his Xfinity debut. Throw in a breakthrough for Myatt Snider in the Xfinity Series and a coming-of-age drive from William Byron at Homestead-Miami Speedway, and the status quo in NASCAR has been shifted entirely on its head.

Storylines have run this week portraying NASCAR as a motorsport ripe with parity, showcasing the surprise winners and strong performances from McDowell and Homestead stage winner Chris Buescher among others.

To their credit, they might be on to something. Seven different teams finished in the top 10 last weekend and a current freeze on many parts in preparation for the Next Gen car might be allowing mid-pack organizations to close the gap.

“The rules are the rules, and they haven’t changed in a while,” third-place finisher Martin Truex Jr. said after Sunday’s (Feb. 28) Dixie Vodka 400. “Everybody is really just trying to work on the same things here each and every week. So it gives you time to work on your stuff and not have to really develop a lot of things.

“The smaller teams definitely get to catch up. We’ll see if it continues.”

Smaller teams have certainly punched above their weight in short amounts this year, and it’s partially due to the rules Truex discussed. But there’s also a fair bit about the current stretch of interesting winners and storylines that seems attributable to the unique slate of races to start the season.

The opening trio of race weekends this year were about as varied as NASCAR can provide in such a small sample size.

First off was Daytona, which is prestigious but plays out a bit like a lottery. There’s a definite skill to it — Hamlin survives to the end of these races for a reason — but so much of the field is lost to the multiple vicious crashes these days that an underdog can contend by simply surviving the carnage.

That’s exactly what McDowell did this year, clear through to the winning move. He didn’t lead until turn 3 of the final lap, where he dove under a crashing pair of Team Penske teammates that were leading to catch a timely caution and snag the biggest win of his career.

The ensuing weekend’s race was on the Daytona road course, which by design removes a certain percentage of the aerodynamic and top speed-based variables that keep some teams from contending. If it weren’t for a caution for light rain in the closing laps, defending champion Chase Elliott likely would have won. But Bell was there when it counted to capitalize when opportunity arose.

Homestead is the most “traditional” track NASCAR’s visited so far, given that it’s a 1.5-mile oval on paper. But the track’s unique layout and abrasive surface makes it race almost like the younger brother to mid-2000s Michigan International Speedway, awarding those able to save their tires and run right next to the wall without clattering into it and damaging their car.

The tire wear and evolving track caused comers and goers throughout the race, notably allowing Tyler Reddick to storm from 13th to second in the final 50 laps.

Each track was different in why it allowed atypical contenders to rise up. There’s also an argument to be made that Bell and Byron aren’t true underdogs – any other Joe Gibbs Racing and Hendrick Motorsports winners would seem standard. But the end result has been a unique opening to the 2021 season that’s shaken up the preconceived notion of usual playoff contenders and dominant drivers making early statements.

That said, the house usually wins in Las Vegas. This weekend may be no different.

While it can provide a thrilling show on a good day, Las Vegas Motor Speedway is easily the most standard track NASCAR will have visited to date. The 1.5-mile intermediate oval races similar to Kansas Speedway and others, making it more representative of the sorts of tracks drivers will reach in the playoffs.

There will be fewer racing lanes than at Homestead, less tire falloff and more aerodynamic dependence than other tracks the sport has seen so far this year. That all plays into the hands of the sport’s power teams, as shown by the track’s recent results.

In the past 10 years of NASCAR races at Las Vegas, only one Cup race has been won by a driver that wasn’t a champion beforehand. It happened to be the closest non-champion in the sport’s history. Carl Edwards won in 2011 en route to his legitimate tie with Tony Stewart in the Chase with Stewart given the title due to his wins on the year.

The other victors are all title winners and potential Hall of Famers: Stewart, Matt Kenseth, Brad Keselowski, Harvick,  Truex, Joey Logano and Kurt Busch. Of those the only real surprise is Busch, and that’s solely because his win last year came for a Chip Ganassi Racing squad that didn’t triumph in any other races.

Xfinity results aren’t much better. No driver has won from outside of the top 10 in the past 12 years, with the list of winners including multiple Cup drivers and veterans that also triumphed frequently elsewhere. Chase Briscoe swept the season’s two Vegas trips in his impressive 2020 run last year.

Recent history shows that this will likely be the first race where the true power players in the sport come out and shine. With tracks like Kansas Speedway, Phoenix Raceway and Richmond Raceway coming up in the next few months that’s likely to continue through the majority of the spring.

That’s not to say there won’t be more opportunities for upsets and parity. In fact, this regular season will provide more chances for underdogs than any other in recent history.

From the absolute wild card that is the Bristol Motor Speedway dirt race to road course races at Circuit of the Americas, Sonoma Raceway (if it stays on the schedule), Road America, Watkins Glen International and the Indianapolis Motor Speedway infield, there will be numerous opportunities for teams to rise up and contend.

But the playoffs leave few opportunities for such surprises, particularly in the penultimate round consisting of Texas Motor Speedway, Kansas and Martinsville Speedway. That’ll make it difficult for any underdogs to mount a serious charge when it matters most even if these storylines continue throughout the year.

Make no mistake, drivers like McDowell have already changed this season’s story. Even if Front Row Motorsports falters, one driver that’s expected to have a shot at the playoffs is going to miss their chance on points.

But the odds are strong that we’ll start seeing an overall return to the status quo – both this weekend and when it matters most in the playoffs.

Though you never truly know. A few gamblers in Vegas do get lucky.