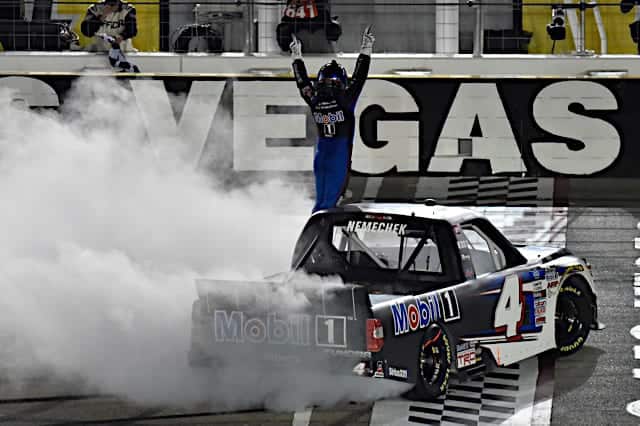 However, it was Nemechek who held off his boss and team owner Busch to claim his seventh career win and first for KBM after joining the team this season.

“It means a lot to me,” Nemechek said. “Mobil 1 on board, coming back to the Truck Series, that was the plan, that was the goal. We came into this year with the hashtag here for wins and we are here for wins. I definitely think experience paid off tonight. We did an amazing job.”

Busch rallied back to the front after spinning from second place on lap 89 following a cut tire, but ultimately fell one spot short of another checkered flag.

“Anytime you finish second to a team truck, you know how good the equipment is, and it’s nice to see the equipment getting full potential and running up front,” Busch said. “I’m exciting to have John Hunter [Nemechek] this year. When we had the opportunity to talk last year and to bring him in and to have Eric Phillips (crew chief) back on board, that was going to be a winning combination, I felt like. And here we are already reaping the benefits.

“I hate I finished second obviously, I want to win. But as a team owner, I get paid the same whether they win or I win, and it’s nothing, so I’m all good.”

Nemechek dominated the early portion of the event. Only slowed by a Cory Roper spin, Nemechek cruised to the stage win in the opening stage.

Roper retired from the race after crashing hard in stage three. He finished 36th.

Busch swept past Nemechek on lap 48 to claim the victory in the second stage.

Defending champion Sheldon Creed encountered trouble in stage two when his GMS Racing Chevrolet encountered engine problems. Fortunately for Creed, the stage break allowed his team to resolve the problem and catch up to the main pack.

Creed was collected in a crash shortly afterward when Conor Daly‘s truck slammed the wall at a terrible angle and caught fire. The inferno also collected Tate Fogleman and Tyler Hill.

While Nemechek and Busch cruised upfront, the same could not be said for their teammate Chandler Smith. Smith crashed exiting turn 2 and never recovered.

Lap 97 saw the largest incident of the night when Raphael Lessard and David Gilliland tangled, collecting Ryan Truex, Hailie Deegan and Bret Holmes, who was making his first career start.

Four-wide racing throughout the field was a dangerous game.

The night ends for some after aggressive racing at @LVMotorSpeedway. pic.twitter.com/qxMgzeqwi7

The Trucks will be back in action on March 20 at Atlanta Motor Speedway for the Fr8 Auctions 200. The green flag is scheduled to wave at 2:30 p.m. ET with TV coverage provided by FOX Sports 1.

Kyle was brilliant to bring out the caution with his spin. He would have been at least 2 laps down, but ends up with a free pass on the very next caution.

It works if you don’t admit it. I seem to remember Dale Jr. boasting that he did it right after a race and begin penalized by NASCAR.