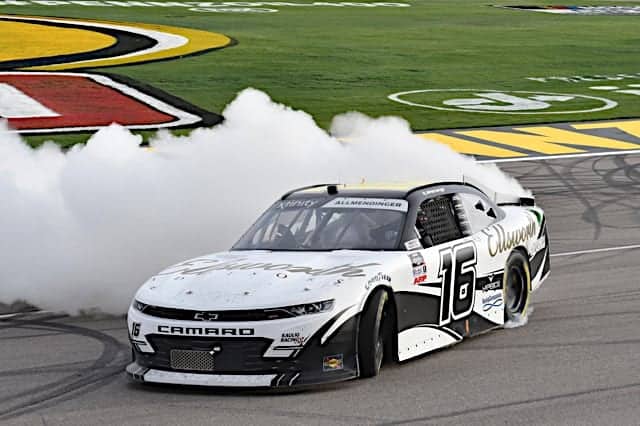 The longtime racer’s No. 16 got by Daniel Hemric on a late-race restart, passing the driver who had been out front for most of the race and setting sail en route to the win. The victory was Allmendinger’s sixth in NASCAR’s Xfinity Series and his first since the Charlotte Motor Speedway ROVAL last fall, as well as Kaulig Racing’s eighth overall.

“Just emotional because you don’t know when you’re gonna do this again,” Allmendinger said in his post-race interview. “You never know – this could be my last win, I don’t know – I hope it’s not. I think we can do it a lot more.

“[Team owner] Matt [Kaulig] gives me these opportunities…[the team is] working their tails off. …We put so much effort into making these cars better and it showed these first four weeks. Didn’t get the finishes we wanted the first couple…I’m back full-time, and this is fun, but I want to win so bad for Matt every week. It’s hard to put into words what he means to me and truly how bad I want to win for him. It’s in a different way, but it’s the same theory as wanting to win for Roger Penske. It means that much to me that he believes in me…I don’t take [this opportunity] for granted and I work my tail off every week. I’m having fun with it, but I’m so ill before the race because I just want to win for Matt Kaulig.”

Myatt Snider, fresh off his first career win in last week’s event at Homestead-Miami Speedway, led the field to green alongside Austin Cindric. Noah Gragson, who had started 34th, made his way up into the top 10 by the time the first caution flew. Hemric led the first lap as he and Cindric split Snider for the lead, but Cindric took it and held on until that yellow flag waved.

That was for Stefan Parsons‘ Dogecoin machine, which spun around on the frontstretch. After the restart, Cindric held on to win the race’s opening stage but lost the lead to Hemric off of pit road.

The problems didn’t stop for Cindric there, though, as the No. 22 had a flat tire and lost a host of positions on the restart. Despite going a lap down and running slow on the apron, Cindric was saved when Ty Dillon‘s No. 54 spun down into Riley Herbst in turn 2.

Minutes after winning Stage 1, the 2️⃣2️⃣ has a problem following the restart! pic.twitter.com/g1z2gVkalh

Dillon was able to continue, but Herbst suffered his third DNF in four 2021 races.

The next restart lasted just a couple minutes before Ryan Sieg brought out another caution, losing the No. 39 on the frontstretch and tearing the splitter off the Chevrolet in the infield grass. Yet another caution flew when Justin Haley, running solidly in the top 10, went for a spin.

Following Cindric’s troubles, Hemric had been comfortably out front, nailing his restarts and setting sail to win the second stage. He lost the lead on the pit stops after the green-and-white-checkered to Brandon Jones, who battled with Hemric before clearing the No. 18.

Hemric eventually chased Jones back down, retaking the lead, but soon found himself challenged by Allmendinger, who took the lead with just over 60 laps remaining.

NEW LEADER: @AJDinger is there!

Move the 1️⃣6️⃣ to P1 midway through the final stage! pic.twitter.com/F5F3UKrMnn

The last green-flag pit cycle didn’t change things, as Allmendinger gapped Hemric. The pair gapped the entire field, in fact, as the Nos. 16 and 18 led the rest of the lead-lap cars by at least 12 seconds with 30 laps to go.

Those gaps disappeared when Harrison Burton blocked Cindric, a decision which was immediately followed by Cindric turning the No. 20 and bringing out the caution. Hemric got by Allmendinger for the lead when the field made their pit stops.

Dillon stayed out but immediately lost spots on the restart while both Hemric and Allmendinger battled for the lead, culminating in the No. 54 moving across Brett Moffitt‘s bumper and turning into the wall. A separate, simultaneous incident involved Garrett Smithley, Alex Labbe and others, setting up yet another restart with 13 laps remaining. Moffitt’s day was done with the crash, ending a solid race for the Our Motorsports team in which the No. 02 had run in the top five or 10 most of the afternoon.

Allmendinger retook control on the restart, though, setting sail and gapping Hemric by about a second with five laps remaining. The No. 16 cruised from there, securing his sixth career Xfinity Series victory by more than a second. The veteran driver’s emotion was evident, taking a minute to lean on his car after a burnout.

Winning means so much in this sport. @AJDinger explains why today's victory is so special. ♥️ pic.twitter.com/8jWtDxRpX6

The Xfinity Series heads south to Phoenix Raceway next week for the Saturday (March 13) afternoon Call 811 Before You Dig 200, set for 5:30 p.m. ET. Coverage will be on FS1.

Ty Dillon is nothing more than a wrecking machine in the 54 car. So many bonehead moves and excuses to follow. He’ll continue to get more opportunities because of his grandfather’s connections.

That can’t be right ! Ty just told us all that he knows he is just as good a driver as any Cup driver. And he’s so sure of it that he said it twice, on camera.