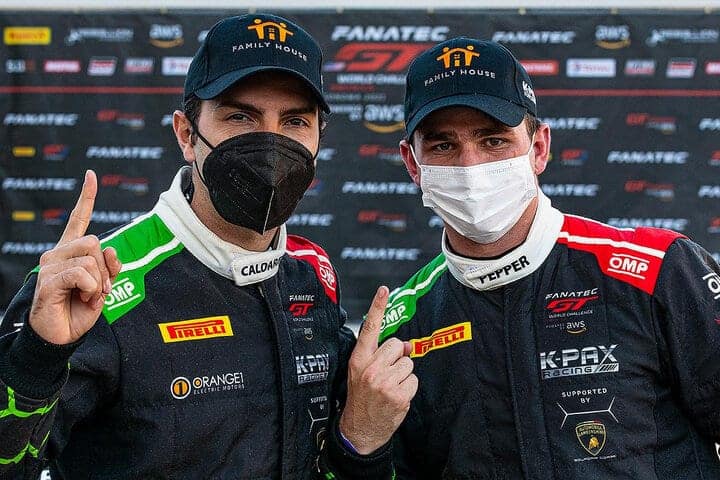 “Andrea [Caldarelli] built up an incredible lead at the start – clean air out front and checked out,” Pepper said after the race.  “The car was really good – no issues there – and out pit stop was very smooth.  I went back out and there was a yellow for like the first five laps, and the restart bunched things up.  I took it cautious the first few laps to make sure the tires were back up to temperature and that the pick-up was gone.  Then, I cracked into it and opened up a decent lead until letting off a bit toward the end so we didn’t have any issues.  The sister-car did a great job too.  [A dream] start for us, and let’s see if we can take a clean sweep all season.”

Caldarelli qualified his Lamborghini Huracan GT3 EVO on pole Saturday morning by nearly seven-tenths of a second.  Once the green flag dropped, Caldarelli and teammate Corey Lewis ran off and hid from the field.

Further back, there was some intra-team contact on the first lap as George Kurtz spun in turn 4 after contact from teammate David Askew.  Kurtz was able to continue, but lost a significant amount of time.  At the same time, TR3 Racing’s Ziad Ghandour spun and hit the barriers.  The incident resulted in significant rear-end damage to Ghandour’s Lamborghini, putting him out of the race.

It took only a few laps before Caldarelli was able to drop Lewis.  13 laps into the race, the lead was already up to eight seconds.  Russell Ward, driving a previous generation Mercedes-AMG GT3, was 34 seconds back in third.  The lead only continued to grow from there up to the mid-race mandatory stops.

A good stop allowed Pepper to get back out with a huge lead of more than 20 seconds over teammate Giovanni Venturini.  There were only five cars remaining on the lead lap after the stops and that number continued to drop.

On lap 25, Compass Racing’s Matt McMurry lost his left rear wheel nut exiting turn 6, allowing the left rear wheel to come off of the car.  McMurry slowed to a stop on the track while the wheel ended up in the grass.  Since this occurred in the middle of the pit stop window, SRO America officials chose to keep the green flag out until after the pit stop window closed in order to not advantage or disadvantage anyone.  Once the window closed, the race’s sole full course caution was thrown to retrieve McMurray’s stricken Acura.

Despite the yellow, Venturini wasn’t able to close all the way up to Pepper because the South African driver had four lapped cars in between himself and Venturini at the time of the caution.  As a result, Pepper was able to make a break for it in clean air when the green flew again.

During that caution, the Winward Racing Mercedes with Philip Ellis at the wheel suffered a mechanical that put them out of the race, dropping the number of cars on the lead lap to three.  A few laps after the restart, Kurtz’s co-driver Colin Braun ran in the back of Turner Motorsport’s Robby Foley exiting turn 8b.  Foley was running a somewhat distant third at the time, but the contact forced him to make a pit stop.  Ultimately, Foley and Michael Dinan would finish two laps down.  Braun continued with a left front corner damaged similarly to how Erin Vogel‘s car was damaged in qualifying.

Foley’s forced pit stop put the two K-PAX Racing Lamborghinis on a lap of their own for the final 25 minutes of the race.  From then on, Pepper pulled away to take the overall win.

The margin of victory was 15.7 seconds over Lewis and Venturini.  Foley and Dinan ended up in ninth overall, but that was good enough to round out the Pro podium.

In the Pro-Am class, Compass Racing’s Rodrigo Sales led from the pole and quite competitive.  Sales brought the team’s new Acura NSX GT3 into the pits in fifth overall.  A decent pit stop and switch to McMurry seemed to have the team in position to claim a class victory.  Unfortunately, it may have been a little too fast as the wheel came off, ending their day.

McMurry’s misfortune went to the benefit for Wright Motorsports’ Jan Heylen.  When McMurry’s wheel came off, Heylen swept into the Pro-Am lead.  The issues in the Pro class allowed Heylen and Fred Poordad to get all the way up to third overall by the finish.  They may have been a lap behind both of the K-PAX Lamborghinis, but it was good enough to give them the class win.

Heylen and Poordad ended up 2.195 seconds ahead of DXDT Racing’s Askew and Ryan Dalziel in the No. 63 Mercedes.  Racers Edge Motorsports’ Dakota Dickerson and Taylor Hagler were third in class, followed by Kurtz and Braun.  Vogel and Michael Cooper were fifth.  There was only one Am class entry in Sonoma.  The AF Corse Ferrari for Jean-Claude Saada and Conrad Grunewald finished eighth overall.

Race No. 2 of the weekend for Fanatec GT World Challenge America powered by AWS is scheduled to start at 4:15 p.m. ET Sunday afternoon.  The race will air live on CBS Sports Network.