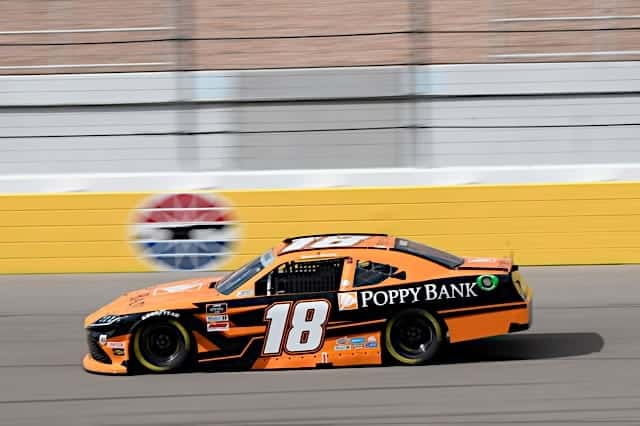 On Saturday, March 6 it looked like Daniel Hemric was finally going to earn his first win. The Kannapolis, NC native led a race-high 74 laps in the Alsco 300 at Las Vegas Motor Speedway and brought home his first stage win of the season.

With about 60 laps to go in the race, Hemric was passed by AJ Allmendinger for the lead. But with a caution with nearly 25 laps to go, the No. 18 crew was able to put Hemric back out front off pit road. Hemric held that lead until 13 laps to go when Allmendinger passed him on the restart.

The 30-year-old driver mounted a charge in the closing laps, reducing Allmendinger’s lead to under a second on the final lap. Unfortunately, it wasn’t enough; for the eighth time in his Xfinity Series career (10th in NASCAR career), Hemric was the bridesmaid in the runner-up position.

“So proud of everyone on this Poppy Bank Toyota Supra. Man, these [Joe Gibbs Racing] cars are so fast.” Hemric told FOX Sports following the race. “You hate to have one get away like that but we came here… we said we wanted to try to have more speed to lead laps and win stages, and we did that today. We ended up with a shot there and just got beat.”

Hemric has started out the season strong, with four top 10s in as many races, including three straight top fives. But the win continues to allude him and as close as it seems, it still appears so far away.

The JGR driver will try it again next week at Phoenix Raceway when the Xfinity Series stays out west for a trip on the 1-mile oval. The Call 811 Before You Dig 200 airs on March 13 at 5:30 p.m. ET on Fox Sports 1.