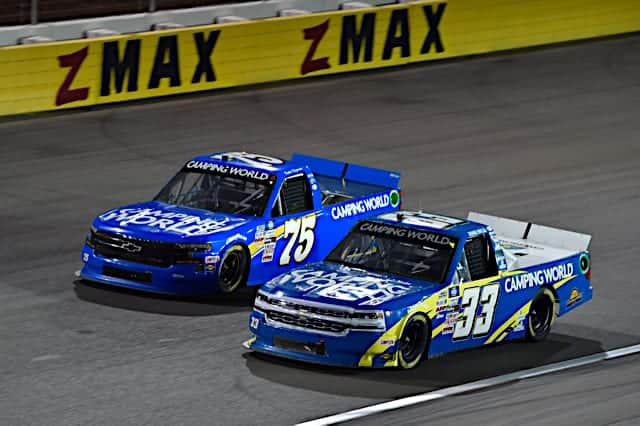 With finishes of seventh and eighth in Friday night’s (March 5) NASCAR Camping World Truck Series race at Las Vegas Motor Speedway, Grant Enfinger and Parker Kligerman were the only drivers to collect more than $15,000 from Marcus Lemonis.

Lemonis, the chairman and CEO of Truck Series title sponsor Camping World, stepped up in a big way for the teams struggling to get sponsorship. He offered any team who put a Camping World wrap on their truck a $15,000 bonus. That amount turned into $25,000 if they scored a top 10, $35,000 with a top five and $50,000 with a win.

Of the 10 trucks with Camping World wraps, quite a few of them crashed out, but Enfinger and Kligerman were the only two to score an extra $10,000 by finishing inside the top 10. Both drivers flirted with the top five during the race before settling in seventh and eighth, respectively.

In fact, the duo raced hard to the finish line to be the top-finishing Camping World truck, with Enfinger coming out just ahead.

“I had an awesome battle with Parker the last few laps,” Enfinger told Frontstretch. “We had a lot of pride on the line to be the first Camping World truck.”

“I knew we were racing to be the top Camping World truck,” Kligerman said. “So I was like, ‘Oh no! He got me.'” The Henderson Motorsports driver explained to Frontstretch he radioed the team as he just lost the spot to the No. 9 off of Turn 4.

Lemonis’ deal all stemmed from Enfinger, who was in the Truck Series Championship 4 last year, missing the previous race at the Daytona International Speedway road course due to a lack of funding. Lemonis and Enfinger talked, and soon after, Enfinger was announced to be piloting the No. 9 for owner/driver Codie Rohrbaugh‘s CR7 Motorsports with Camping World on the hood.

“Feels great to bring home a solid finish for Codie and all the guys on this No. 9 truck,” Enfinger said. “We had a shot at the top five, but proud to bring it home P7. Thanks to Marcus and all he does to promote our Truck Series.”

The deal took off from there, with Kligerman and his team Henderson Motorsports soon catching wind of it.

“It was Monday night, I was about to go to sleep, and I got a text from Conor Daly and then Landon Cassill, and they both knew I was unsponsored,” Kligerman said. “And they said, ‘Hey, man, check Twitter.’ And next thing I knew, we got the response [from Lemonis].”

But for Kligerman and Henderson, the $15,000 was just the starting point.

“We expect every time we show up to finish top 10, on our good days, run top five,” Kligerman said. “So I think for us, that bonus made sense doing it, right? If the bonus wasn’t there, I don’t think we would have been able to pull it off.”

Kligerman noted the team didn’t have a sponsor and hadn’t planned on making the trip out to Vegas.

For Enfinger, it remains to be seen if this result and the extra cash that comes with it leads to more opportunities. He was previously slated to run in just 12 of the season’s 22 events with ThorSport Racing prior to landing this one-race deal with CR7.

For Kligerman, the team now sets its sights on Atlanta Motor Speedway in two weeks, where Henderson is trying to get the same deal from Lemonis again.

Hey @marcuslemonis, how about a wager? A top-10 for the 75 tonight and we double down with this same @CampingWorld scheme for @amsupdates?

“We’d love to have Marcus and Camping World on again, if they’re willing to do it,” Kligerman said. “They’re incredible supporters of NASCAR. And Marcus, he’s such a cool dude. I would say in so many respects, he’s an idol of mine. I’ve been very entrepreneurial in my life and had businesses. I look up to someone like him, he’s an incredible business leader, but also can get very involved in sports and all the things he does.

“To have his support and know he was watching, it’s really cool to me, from a fan perspective, let alone the financial side of it.”

Great to see guys like Lemonis in racing, we need more of them. Too many rich kid racers buying their way into the top series with their arrogance, lack of humility and lack of skill. You all know who I’m looking at after last week’s rich kid outburst. This kind of stuff hopefully puts money into the hands of the talented drivers who missed out on the genetic lottery.

Still there is something wrong with the model.
Won’t be able to have this happen every week.
As a smart man told me, if you can’t afford it don’t do it.

Unsure of what # from last week you’re referring to.

Nice going Marcus Lemonis sponsoring 10 trucks. But why did David Gilliland refuse the generous gesture? All he had on his truck was a big DGR decal on the hood. He was a legitimate truck to win also and get that big bonus. He could use that 10 grand after demolishing his truck.