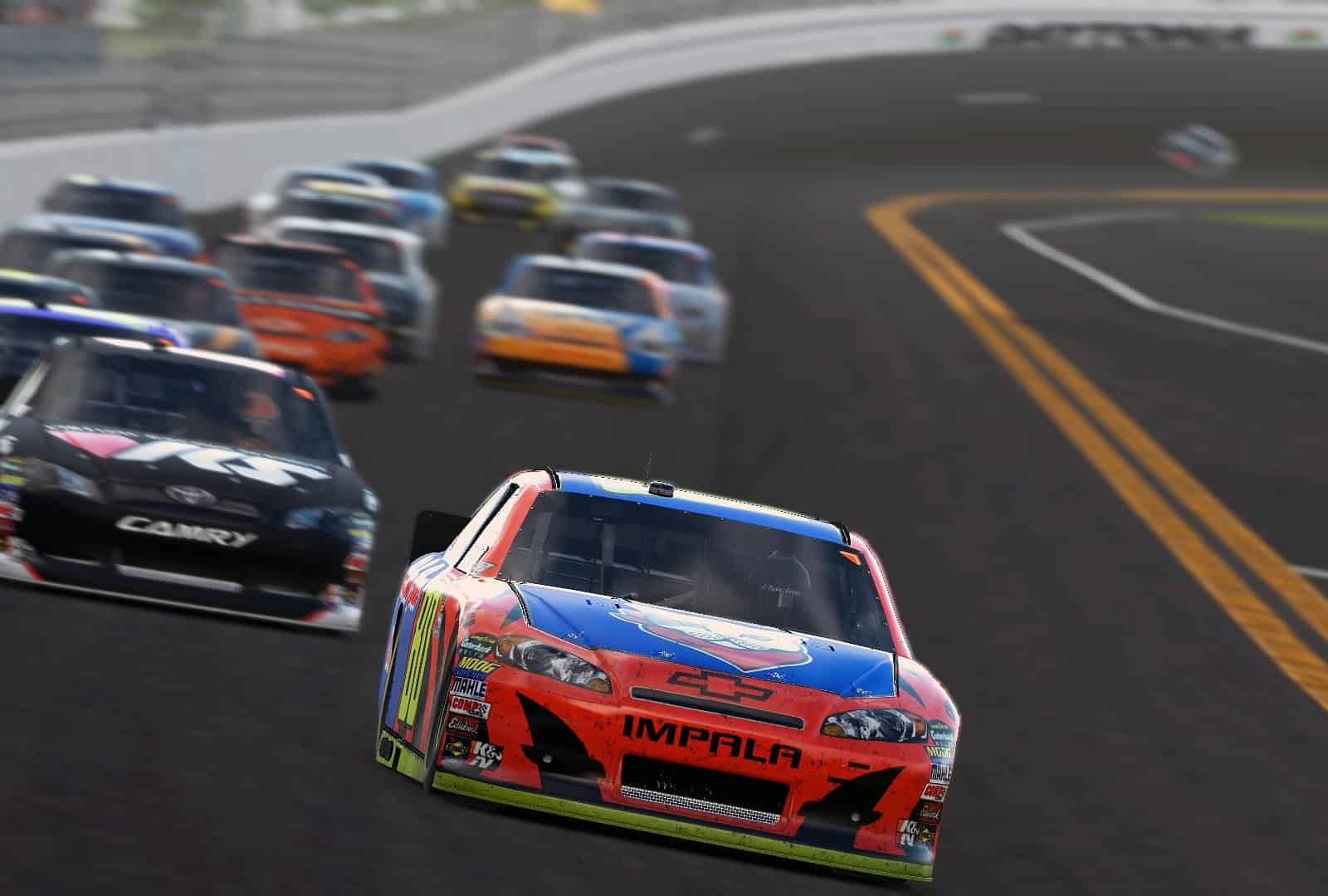 The Virtual Frontstretch returns again this week with coverage of FTF Racing at Homestead-Miami Speedway, Monday Night Racing at Rockingham Speedway, eRacr.gg’s Carnomaly 500 and the first week of the eNASCAR iRacing Road to Pro Series.

It was a jam-packed week in sim racing, with many of the top drivers having to focus not only on the Coca-Cola Series, but also setups for the Carnomaly 500 as well as the start of Road to Pro with their technical teams.

Also, Season 2 of iRacing is right around the corner, so we also have some info on the updates coming in the next sim build.

The FTF Cup Series managed to clean it up since the ending at Auto Club Speedway. In the Visit the Florida Keys 400k presented by Conch Republic, the cautions and the green flag racing were more spread out among the 167 laps at Homestead-Miami.

In the second race with the 2012 iRacing Car of Tomorrow, Michael Guest was the best once again, finding his way to the lead by the end for his second career FTF Cup Series victory. It was also Guest’s second win of the season, also in a row.

“Trying to hit my marks in this type of car against top level drivers is about the most fun you can have on here,” Guest said. “We had this package about three years ago, and it’s refreshing to get to run this because with what we have now, it’s a lot of downforce. This is the opposite of that. Everybody is sliding, especially out of the corner, and you can just angle yourself down off the corner, and it’s almost like magic.”

Two in a row! @MGuest33 takes the checkers at the virtual Homestead-Miami Speedway for his second win of the season, extending his point lead further!#FTFCUP pic.twitter.com/iyeh67kIR2

Three races into the season, Guest shares the point lead with the driver he bested in the final laps, Graham A. Bowlin. In the playoff standings, Guest has a healthy 12 playoff points in three races and his next closest competitor Michael P. Frisch only has five from his win at Daytona International Speedway.

The schedule changed multiple times throughout the week as the Monday Night Racing presented by Tufco Flooring administration debated running Chicagoland Speedway with NASCAR Xfinity Series cars for a moment. Ultimately, the original schedule was left intact and the MNR drivers loaded up their virtual Street Stocks for 100 laps at Rockingham Speedway.

It was the cutoff for the Round of 10, and three drivers would face elimination by the end of the evening. Max Kennon came into the event on the outside looking in, but when the virtual dust cleared, he was on top, advancing by victory to the Round of 7. Kennon held off Richmond Raceway’s Brandon Brown and a late charge from NASCAR spotter TJ Majors to take his first victory in the series.

“It’s hard to handle the stress of being on that cutline every week, but you just have to go into every race like it’s the same one as the one before and it’s just a regular race, and it seems to be that mentality works out,” Kennon said. “I just want to thank everyone behind me every week.”

With Kennon in, that took Kyle Busch, DJ Cummings and Ron Capps out of the playoffs. All three drivers found trouble often during the race. Capps was the first to use his fast repair after flipping violently in the first caution. Busch ended up also flipping after making contact with the No. 53 car, driven by myself. Busch took the claim for the incident. Cummings found trouble with race control, earning penalties for avoidable contact and a restart violation.

Kennon will face off against Gabe Wood, Will Rodgers, Matt Stallknecht, Anthony Alfredo, Preston Pardus and the inaugural MNR champion Nick DeGroot in the Round of 7.

The Frontstretch crew had decent speed on Monday night. Frontstretch editor Michael Massie ended up 18th after late-race contact inside the top 10, while I brought the No. 53 car home in one piece, finishing eighth.

FINAL LAPS: Max Kennon (@Madmaxk) holds off @BrandonBrownWV to earn himself his first MNR victory and punching his ticket to the #Roundof7 #BigGreenEgg100 | @BigGreenEgg pic.twitter.com/0jUvOLaa2q

After nearly two months of registration, preliminary races, qualifying and battle 150s, the eRacr.gg Carnomaly 500 at Daytona International Speedway was finally upon us, with 43 drivers ready to fight for their share of the $30,000 purse. Hosted by NASCAR drivers Landon Cassill and Parker Kligerman, with the day-to-day operations run by Joshua Mendoza, eRacr.gg put on their second big show within the last year. This time, it drew nearly 400 drivers to compete in an event unlike any other in the iRacing world.

Nick Ottinger was the pole sitter for the event, but opted to go for the Whitz Racing Products “Last-to-First” Challenge for a chance at an extra $15,000. On the final pace lap before the green, Ottinger fell back to start in dead last.

Kyle Busch didn’t make it through the preliminary round but was awarded the eRacr promoter provisional. He started just ahead of Ottinger as the green flag dropped for 500 miles of unrestricted virtual superspeedway racing.

Ray Alfalla led the field early while Ottinger attempted to cut his way through the field as fast as he could. The challenge didn’t pay off for Ottinger, though, as his race ended prematurely on lap 21. Will Rodgers spun wildly in Turn 2, and Ottinger had nowhere to go.

Up front, the cautions were sporadic but the racing was intense. By halfway, Caine Cook had worked his way to the lead but wasn’t ready to give it up when Chris Overland attempted to pass.

“That was some real dumb s—, but it looked cool,” Overland said over voice chat after he was blocked into the grass by Cook.

Eventually, Overland got the lead and attempted to make a similar block, but it didn’t work out. The resulting contact killed the chances of victory for Cook, Alfalla and Jake Nichols.

Brandon Hayse Kettelle and Graham A. Bowlin found themselves in control when the dust settled, the two swapping the lead multiple times as green flag pit stops commenced. It looked like it was shaping up to be a fight between those two, but a caution in the middle of green flag stops jumbled up the order and ultimately broke the timing and scoring. As race control attempted to fix the chaos, Garrett Smithley wound up taking control for the next restart after a lengthy virtual cleanup.

Smithley fell back on older tires, giving way to Seth DeMerchant for a handful of laps. Another caution came, allowing another opportunity for fresh tires. DeMerchant took it, and the lead was handed over to Nic Morse, who didn’t lead for long. A quick caution after the restart gave both Jimmy Mullis and Michael Cosey Jr. the front row. The race extended into one overtime, and Mullis was able to hold off Cosey and Morse for the victory, winning $3,000 in the process.

WE WON THE #Carnomaly500!!! Unreal effort with @znovak15 on the box, great calls and great wreck avoidance! Feels so good to get back to victory lane and to do it with these beautiful @SunocoRacing colors!! UNBELIEVABLE!!!!!

“I don’t even know what to say, I don’t know if I can find the right words, but this is incredible,” Mullis said after the win. “I’m surprised I held on, but this thing was a rocket all night. … Man, it just feels really good to finally win a race.”

The entirety of the Carnomaly 500 can be viewed on demand at eRacr.gg’s Twitch.

In the first round, the Road-to-Pro Qualifying Series, any driver can race for their chance at finishing in the top 70 in the standings after a couple of months. Those 70 drivers will then move onto the second half of the Qualifying Series, and the top 20 from there will move to the Contender Series to go against the Bottom 20 from the 2021 Coca-Cola Series.

The first race of the Qualifying Series took place on Thursday night at the virtual Las Vegas Motor Speedway, with 36 splits of either 34 or 35 drivers taking part in the races. A total of 1247 drivers strapped in for 134 laps in each of their respective splits. The winner of the top split, Parker Retzlaff, took home 415 points for his efforts. However, the winner of the bottom split — Thomas Fensler — only scored 54 points, placing him 781st in the overall standings.

The Top Split finish:@Parker79p passes @Dard2121 in the closing laps to win the first race of the 2021 #eNASCAR @iRacing Road-To-Pro Series season at Las Vegas. pic.twitter.com/UwTcQo3iaG

Seven of the 36 splits went into overtime; Brad Wright won the eighth and longest split. Winners of the top 10 splits all find themselves currently in the top 70 after one week, with retired NASCAR driver Elliott Sadler in that final cutoff spot after a third-place finish in the ninth split.

Top split had a Strength of Field (SoF) of 7465 and was broadcast on Podium eSports. Retzlaff passed Darik Bourdeau in the closing laps to win the race. Second split was at 6724 SoF and was live on STN Racing. In a photo finish, former Coca-Cola Series driver Santiago Tirres edged another former Coca-Cola Series driver, Nickolas Shelton, for the win.

The entirety of the Road-to-Pro Top Split can be viewed on demand at Podium eSports’ Twitch.

Week 12 is coming to a close in a few days, and that means Week 13 is up next with updates galore for the second season of the 2021 calendar year.

Many of the iRacing ovals will update their “track surface properties” during the build, with iRacing stating that, “Track surface dynamics have been updated to react more realistically with tires of different compounds, such that softer tires will tend to produce a thicker layer of rubber than harder tires.” This could mean the return of multi-grooved racing to the oval side of iRacing, depending on what those track surface properties exactly entail.

? COMING TO @iRacing SERVERS NEAR YOU ?

Get ready to play in the dirt! The @BMSupdates Dirt Track will be available on March 9th! pic.twitter.com/CaefEnqov9

Speaking of tires, dirt tires will be added to all NASCAR and ARCA vehicles so that they are raceable at dirt tracks such as the Bristol Motor Speedway dirt track. That new track configuration is also included in the build, free to those who already have Bristol owned and just in time for real drivers to get some sort of feel before the NASCAR Cup and Camping World Truck series head there at the end of the month.

Fans of motorsports outside of NASCAR will also be able to enjoy the addition of Hockenheim and Bark River International Raceway to the service, as well as an updated Super Late Model.

iRacing members can access the full pre-release notes on the iRacing forum.

FTF Racing is back in the Gen 6 cars this week, but at a track not seen with the NASCAR Cup Series vehicles in real life since 1984. The Sam Bass 250 presented by SpeedVisions will go live at 8 p.m. ET on BottomSplit.

Monday Night Racing Presented by Tufco Flooring is going road racing north of the border. Using the Porsche 911 in Montreal, the Round of 7 kicks off on the secondary Podium eSports channel, Podium 2, at 8 p.m. ET.

Per iRacing, the new build for Season 2 will be released at 8 a.m. ET on Tuesday.

The eNASCAR Coca-Cola iRacing Series and the eNASCAR iRacing Road-to-Pro Series take a week off, returning in two weeks at Atlanta Motor Speedway.

Mooncar announced earlier last week that the Mooncar Premier Series will be coming soon. Per Travis Brown, a.k.a. Moonhead, the series will attempt to start in the middle of March for both points and prizes. The series will have a wild and fast-paced schedule.