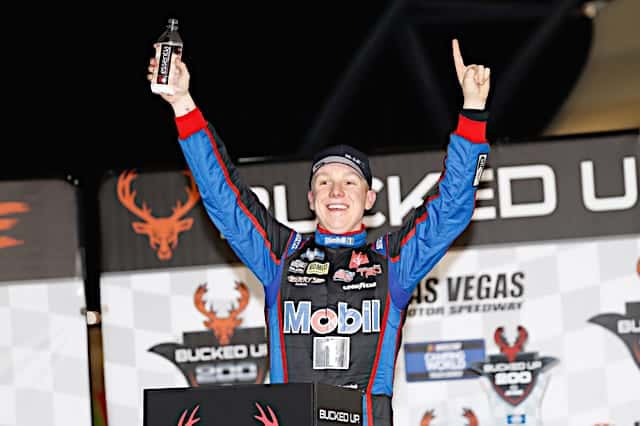 In a Nutshell: John Hunter Nemechek scored his first win since returning to the Camping World Truck Series after spending a year running in the NASCAR Cup Series at Las Vegas Motor Speedway. He led a race-high 94 of 134 laps and endured three late-race restarts in the final 30 laps en route to his first victory with Kyle Busch Motorsports. KBM owner Kyle Busch finished second ahead of Austin Hill in third. Stewart Friesen and Matt Crafton rounded out the top five.

“It’s an awesome day. The goal here for us was to come here and win,” Nemechek said. “We’ve been close the last two weeks and we have fast race trucks. I can’t thank everyone enough – Jack Irving (TRD) from Toyota, Mobil 1, Fire Alarm Services, Kyle (Busch, team owner) for giving me this opportunity. The opportunity to come here and race in the Truck Series for Kyle Busch Motorsports is an amazing opportunity and we’re capitalizing on that.

“We want to be the dominant one this year and we want to win as many races as we can. It’s awesome to get it kicked off here in Vegas and beat the boss.”

In the end, the dominant truck ended up winning the race, but if you had to pick another driver that was capable, it’s easy to point at Busch. Starting in the back of the field, Busch was inside the top five by the end of stage one before following that up with a stage two victory.

Throughout much of stage two and stage three, the No. 51 Toyota had a left rear tire rub that periodically sent smoke flying, and finally, on lap 90, he had a tire failure. Moving down on the apron and limping his way back to pit road, Busch spun, bringing out the sixth caution. Immediately, there was speculation the spin was intentional to minimize the damage done by an unscheduled pit stop, something Busch didn’t really address in his post-race comments.

Kyle Busch wouldn’t explain what happened on his spin so whether he spun to bring out the caution is left open to interpretation. What he said (or didn’t say): pic.twitter.com/E88caYiiwn

After losing a lap and restarting outside the top 20, Busch was the recipient of the free pass when Raphael Lessard triggered a wreck that involved seven trucks and worked his way back through the field. The speed in the No. 51, combined with a trio of restarts put Busch in position to make a run at Nemechek. Ultimately, it wasn’t enough and he came up short with a runner-up finish.

“We just didn’t have enough in our Cessna Tundra. They were a little bit better than us so not sure what differences they had,” Busch said. “I was just really tight and really rough over the bumps, trying to get through the bumps. Looking at the splitter wear, it was really rough on the splitter and wearing through it. We were battling some little things, but overall our truck was still fast. It was cool to come home one-two.

“Anytime you finish second to a team truck, you know how good the equipment is and it’s nice to see the equipment getting full potential and running up front. I hate I finished second obviously, I want to win, but as a team owner, I get paid the same whether they win or I win and it’s nothing so I’m all good.”

RECAP: NEMECHEK HOLDS OFF BUSCH TO WIN IN LAS VEGAS

After opening the season with finishes of 22nd and 33rd at Daytona International Speedway and the Daytona road course, respectively, Austin Hill made his 100th career Truck Series start Friday night (March 5).

Starting 31st, Hill methodically marched his way through the field and finished stage two in sixth. Though he flirted with the front of the field, the driver of the No. 16 Toyota never led a lap and took the checkered flag third, a finish that helped him jump from 23rd to 12th in the championship standings.

“You can see right there, our left front (tire) is corded really bad. We had a good night,” Hill explained. “We finally got on the right track. Those first two races didn’t go the way we wanted them to so this is a good way to bounce back, but it always stings a little bit when you come to a place that you’ve had success at and you don’t get the job done.

“All in all, we just came up short tonight. We just got too tight when the tires started cording and started chattering the left front. Can’t thank everybody at Ibraraki Toyopet enough for coming on board. Everything that all these guys do in Japan for us is a really big deal with everything going on. It’s really cool to see that.”

After a weekend off Hill heads to Atlanta Motor Speedway where he has five starts, including a pair of top 10s. Last season, he led 36 laps and finished runner-up to Grant Enfinger after an overtime restart.

Big problems for @ConorDaly22 at the start of the final stage. pic.twitter.com/4g69sU6lP8

Point Report: Nemechek sits atop the standings by 14 markers over Ben Rhodes, who scored back-to-back wins to open the 2021 season. Sheldon Creed remains third, followed by Crafton, who moved up one spot after a fifth-place finish. Chandler Smith dropped to fifth.

Friesen jumped 10 positions in the standings and sits sixth, followed by Enfinger, who moved up seven spots to seventh, despite missing the Daytona road course. Todd Gilliland and Johnny Sauter sit tied for eighth, 81 points behind the leader. Carson Hocevar dropped four spots and is tied with Austin Wayne Self to round out the top 10.

Watch 'em fan out four wide for the lead! pic.twitter.com/aLySbE8bxH

We needed a Top10 and a clean truck to go to Atlanta – we did that. Thought we maybe could have got a top5 but ripping the top just didn’t work as well as I hoped pic.twitter.com/VXf0wdP4Xs

(2/2) Thanks to my team @GMSRacingLLC, and special mention to @CampingWorld and @marcuslemonis. Grateful for the opportunity to race aboard the No.24 Camping World Silverado at Vegas.

21st place finish here at @LVMotorSpeedway we ran very strong all day and showed top 15 speed! I cannot thank everyone enough especially @marcuslemonis for this opportunity! Looking forward to @amsupdates

Heartbreaking to get wrecked running 9th. So close to a top 10! Fought hard all night to make our truck better and thought we were in a good position.

Thanks to the fans, @CampingWorld & @marcuslemonis for making this a fun week. Onto the next one ?? https://t.co/MnDAyXzk1e

Up Next: The Truck Series takes a weekend off before heading to Atlanta Motor Speedway for the FR8 Auctions 200. Enfinger won the 2020 Vet Tix/Camping World 200, which was postponed from its original March date to June. Coverage begins at 2:30 p.m. ET on FOX Sports 1.