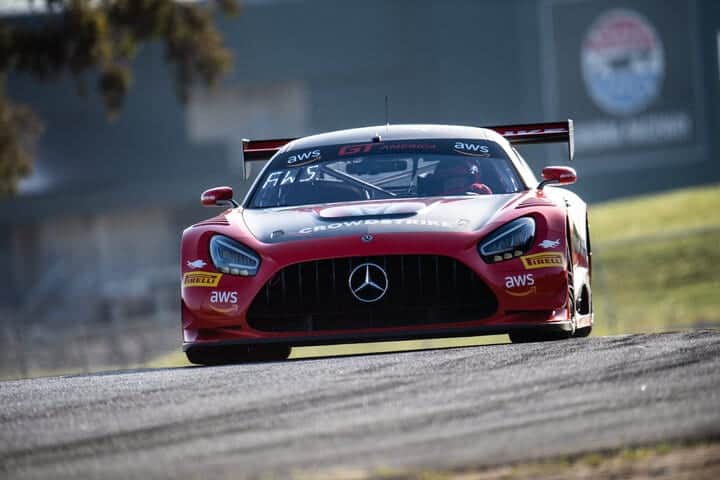 Sonoma Raceway hosted the first-ever GT America powered by AWS race weekend this past weekend.  The series, which is a merger of the former Pirelli GT4 America Sprint and GT Sports Club America series, has GT2, GT3 and GT4 cars racing in 40-minute sprint races with amateur drivers only.  DXDT Racing’s George Kurtz walked away with victories Saturday and Sunday.

Kurtz’s weekend was all-dominant.  He won the pole for the first race by nearly a second and a half over Jason Daskalos, who was driving an older Audi R8 LMS Ultra.  On the initial start, Kurtz got a great start and immediately opened up a big lead.  Everything seemed to be fine.  Then, it wasn’t.

SRO America has some strict rules regarding rolling starts, aimed to prevent shenanigans.  The pole sitter must lead the field to green at a steady pace and not drop below a certain speed.  Kurtz apparently dropped below the minimum speed at one point prior to firing off.  The officials investigated the start for quite a while before announcing a penalty on lap 11.

The penalty was originally announced as a jump start on Kurtz.  As a result, he would be forced to perform a drive-through penalty.  In the first 10 laps of the race, Kurtz had pulled out to a 30-second lead over the field.  Given Sonoma Raceway’s long pit lane, that lead disappeared.  Kurtz went from 30 seconds ahead of the field to 15 seconds behind.

Replacing Kurtz at the front of the field was 60-year old Charlie Luck, driving a Porsche 911 GT3 R for Wright Motorsports in the Masters class.  Luck is best known for competing in what is now the Xfinity Series from 1982-1986.  In 106 starts there, Luck had five top five finishes, including a pair of seconds at Martinsville (1982) and Orange County Speedway (1986).  More recently, Luck has returned to racing with Wright Motorsports, primarily in what used to be the IMSA Porsche GT3 Challenge Cup.  Saturday was his first race in GT3-spec equipment.

When Luck assumed the lead, Zelus Motorsports’ Jason Harward was right on his tail in his Lamborghini.  Kurtz was 15 seconds behind after exiting the pits, but immediately started gaining on Luck by multiple seconds a lap.

Luck was eventually able to shake off Harward, but could do nothing with Kurtz’s pace.  Kurtz ran down Luck in the closing laps and made the pass with three laps to go.  From there, he pulled away to take the win.

The margin of victory was 5.9 seconds over Luck, who took the Masters win.  Harward was third, followed by GMG Racing’s Kyle Washington and Rearden Racing’s Jeff Burton (not to be confused with the former NASCAR Cup Series driver and current NBC Sports on-air personality).

In GT4 competition, Rotek Racing’s Robb Holland started on pole in his Ford Mustang GT4.  However, he didn’t get the best of starts.  That allowed the BMW M4 GT4 of Sean Quinlan to slip past and take the lead.

Once out front, Quinlan pulled out to a six-second lead and managed to hold it there.  Meanwhile, there was some trouble further back.  RENNtech Motorsports’ Ross Chouest suffered a mechanical with six laps to go and went straight at turn 7, nearly hitting Kurtz in the process.  ROTR Motorsport’s Alex Welch suffered a mechanical failure on the final lap and had to give up a podium spot.

In the end, Quinlan was able to hold on to take the win.  His margin of victory was 5.254 seconds over Holland.  GMG Racing’s Jason Bell was third in his Aston Martin, then Premier Racing’s Adam Adelson and Classic BMW’s Phil Bloom.

GT AMERICA POWERED BY AWS AT SONOMA RACE NO. 1 RESULTS

Sunday morning saw a different race.  By virtue of turning in the quickest lap during Race No. 1 on Saturday, Kurtz ended up with the overall pole for Race No. 2.  However, he was a lot closer to the rest of the field.

Harward started alongside and was able to keep pace with Kurtz while Luck gave chase.  Meanwhile, Daskalos and Burton had wheel-to-wheel contact in turn 6 on the first lap.  Both drivers were able to continue afterwards.

Luck was able to get past Harward for second and set off in search of Kurtz.  Unlike on Saturday, he didn’t pull out to a massive lead.  Instead of a 30-second advantage, Kurtz’s lead was around eight seconds.  Luck was able to reel in Kurtz by a couple of seconds.

In the last 12 minutes, a full course caution came out for debris after ST Racing’s Dan Miller went off-course at the chicane normally used by INDYCAR.  He hit a Pirelli placard and dragged it out into the middle of the track to bring out the yellow.

That put Luck right on Kurtz’s tail.  On the restart, Luck was able to hang with Kurtz, but Kurtz was able to pull away in the closing laps to clinch the weekend sweep.

Luck ended up second and scored the Masters weekend sweep, 1.649 seconds back of Kurtz.  Harward was third, then Daskalos and Rearden Racing’s Dmitri Novikov.  Burton was in position to finish in the top five, but he stopped on course with a lap to go and failed to finish.

In GT4, effectively the reverse of the first race occurred.  By virtue of setting the fastest lap in class, Quinlan ended up with the class pole Sunday morning.  However, Quinlan ran into some issues early on, which Holland was able to capitalize on.

Holland was able to open up a decent lead on the rest of the GT4 competitors before Miller’s meeting with the Pirelli placard brought everyone back together.  Holland was then able to hold on over the final four laps to take the win.

Holland’s margin of victory was 1.47 seconds over Bloom, with Quinlan in third.  Bell was fourth, while Adelson was fifth in his Porsche.

GT AMERICA POWERED BY AWS AT SONOMA RACE NO. 2 RESULTS

While GT2 machinery is legal to race in GT America powered by AWS, no examples were entered in Sonoma.  Currently legal GT2 cars include the Porsche 911 GT2 RS CS and the Audi R8 LMS GT2.  KTM is developing a X-Bow GT2 that will debut later this month in a 24H Series event at Mugello Circuit in Italy.

GT America powered by AWS teams will be back in action at Circuit of the Americas on May 1.  The race can be streamed live on GT World’s YouTube channel.