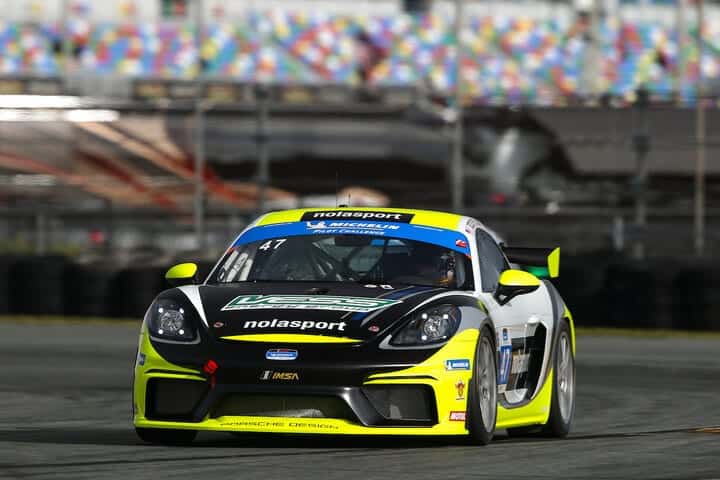 Ever since the current generation of the Porsche Cayman GT4 MR was released at the beginning of 2019, NOLAsport has effectively been the team to beat in Pirelli GT4 America SprintX competition.  Sonoma was more of the same as Matt Travis and Jason Hart won both races over the weekend at Sonoma Raceway.

In addition, the NOLAsport pair love racing movies.  Their Porsche carries a “Me” decal on the hood, along with the cougar from Talladega Nights: The Ballad of Ricky Bobby.  Their fandom is to the point of peppering interviews with movie quotes.  For example, after winning on Saturday, Hart said this:

“We run a really strict nutrition plan here at NOLAsport.  It’s all about pissing excellence, and that’s what we’re doing.” Hart told SRO America’s Amanda Busick after the race.

Travis started from the pole with The Racer’s Group’s Derek DeBoer alongside.  DeBoer was unable to keep pace early on, but that was due to an issue that resulted in an early pit stop.

Further back, a collision on the second lap between Murillo Racing’s Aurora Straus and GMG Racing’s Elias Sabo put Straus and Christina Nielsen out for the day with a broken radiator.  Sabo had an interesting race with two separate spins in the first eight laps in his Audi.

BimmerWorld’s James Clay assumed second-place after DeBoer’s stop and was able to more or less keep pace with Travis up until the mandatory mid-race driver change.  Here, trouble struck for BimmerWorld.  Nick Galante left his stall after a relatively slow stop and nearly hit the similar BMW of ST Racing’s Joe Rubbo.  That resulted in a drive through penalty for an unsafe release.  Clay and Galante ended up finishing 25th overall.

The BimmerWorld penalty put the Aston Martin of Dexter Racing’s Warren Dexter up to second.  From there on, Hart was able to pull away to take the win.

In the Silver class, Dexter Racing’s Ryan and Warren Dexter led flag-t0-flag from third on the grid.  In the closing laps, Murillo Racing’s Christian Szymczak closed in on Warren Dexter, but could not get all the way to the Aston Martin as the Dexters held on for their first class victory in second overall

The margin of victory was 2.136 seconds over Szymczak and Kenny Murillo.  CCR Racing/Team TFB’s Tim Barber and Cole Ciraulo were third in their BMW, then MarcoPolo Motorsports’ Nicolai Elghanayan and Mads Siljehaug in the sole KTM in the field.   Chandler Hull and Jon Miller in the third BimmerWorld entry was fifth.

The Am class saw NOLAsport’s Russell Walker and Patrick Byrne lead flag-to-flag in their Porsche to take the class win in fifth overall.  Their margin of victory was 29.021 seconds over Capstone Motorsports’ John Allen and Kris Wilson.  Smooge Racing’s John Geesbreght and Kevin Conway were third.

Sunday’s second race saw Hart lead early, but this time, he received early pressure from Koch.  The two drivers ran nose-to-tail until the mid-race pit stops.  Hart pitted first to switch over to Travis, while Koch stayed out towards the end of the pit window.

During the window, Travis was able to put down some good lap times.  That meant that by the time the window was complete, Travis had a comfortable lead.  Putt was not able to hold up the same pace as Koch, so he fell out of contention.  DeBoer put himself up to second, but was more than 11 seconds behind

Over the final few laps, DeBoer fell down the order while Travis took it easy.  It was still enough to take the weekend sweep.

Hart and Travis’ margin of victory was 17.154 seconds over Brandon Davis and Terry, who finished third overall.  DeBoer and Spencer Pumpelly were third, then Black Swan Racing’s Jeroen Bleekemolen and Tim Pappas, who came from the rear of the 32-car field to finish seventh overall.  Putt and Koch were fifth.

In the Silver class, Szymczak started on pole in his Mercedes-AMG GT4 and ran well early.  However, Siljehaug took advantage of the low weight of his KTM to make up some time.

After the pit stops, Elghanayan took over from Siljehaug and held the class lead in fourth overall.  Murillo was right on his tail and pressuring for the lead.  Elghanayan seemed to have the pace to hold off Murillo, but spun in the Esses.  That allowed Murillo to make what turned out to be the pass for the Silver win.

Murillo wanted more than just the Silver win, though.  He continued to move up the order and eventually snatched second overall.  In the closing laps, Murillo was running down Travis for the overall lead, but ran out of time.  At the checkered flag, Murillo was just 2.37 seconds behind Travis.

Szymczak and Murillo’s margin of victory in the Silver class was 15.129 seconds over the Dexters.  Elghanayan and Siljehaug recovered to finish third in class, followed by Barber and Ciraulo.  ST Racing’s Tomas Mejia and Bryson Lew were fifth.

In the Am class, Wilson started from the pole and led for the entire first half of the race.  After the pit stop/driver change, Allen resumed with a 12-second lead over Geesbreght in the Smooge Racing Toyota GR Supra GT4.  Over the next few laps, Geesbreght was able to run Allen down.  With only a couple of laps to go, Geesbreght made the pass for the class lead.

From there, Geesbreght opened up the advantage and held on to take the class win in 13th overall.  Geesbreght and Conway’s margin of victory was 2.783 seconds over Allen and Wilson.  Byrne and Russell Walker were third.

Pirelli GT4 America SprintX teams will be back in action at Circuit of the Americas after a long layoff.  Round No. 3 is scheduled for May 1.