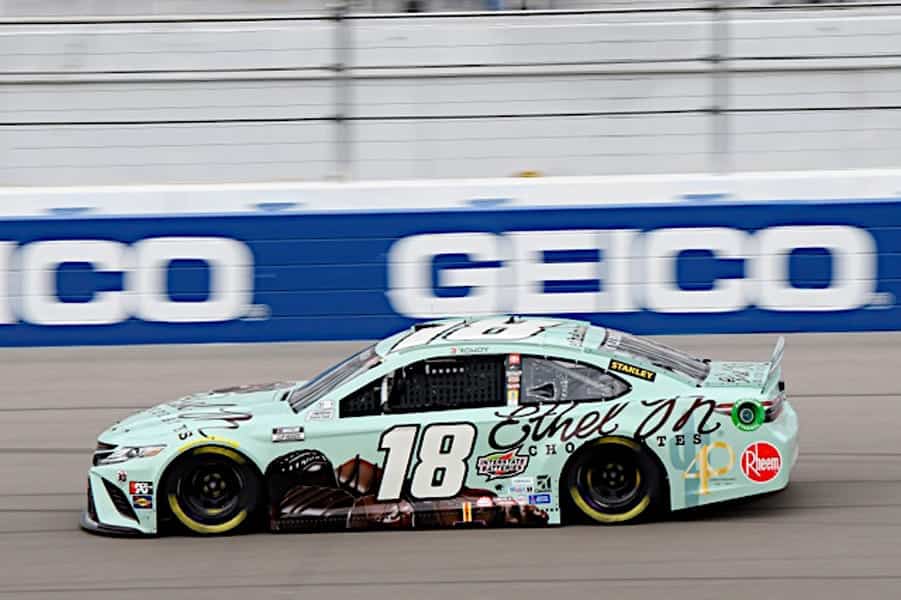 If a team is only as good as its most recent race, then the No. 18 team from Joe Gibbs Racing should feel pretty good about itself as the NASCAR Cup Series leaves Las Vegas Motor Speedway.

With Kyle Busch being paired with new chief Ben Beshore just one year after needing nearly a full season to amount one victory in 2020, the No. 18 team strung together its best finish of the very young 2021 season, finishing third on Sunday (March 7).

It’s a definite step up for Busch and his team after finishing 10th a week ago at Homestead-Miami Speedway for his first top 10 of the year.

During a race in which Kyle Larson dominated, leading 103 laps, Busch was a factor near the front of the field in the end, after fighting his way through the field. For a crew chief and driver that hadn’t worked together in Cup since they were together for three races in 2017, running so well is a definite shot in the arm for both Busch and the No. 18 group.

Or to quote a football coach from the state of Alabama, “It’s a process.”

Kyle Busch: "It's all about building blocks. I felt today was a good building process for us." #NASCAR #Pennzoil400

“We fought hard obviously, Busch said. “We were a little behind the eight ball at the start of the green flag and just were super, super tight all day long. Ben [Beshore] and the guys made awesome adjustments, and I was trying to give the best feedback I can to give them good information that they can base that off of and make the good adjustments.

“We improved each time. I don’t know where we missed it so far from the simulator, but that’s two weeks in a row where we’re not apples-to-apples.”

It does not hurt either that Busch led the charge for Joe Gibbs Racing, which put all four of its cars inside the top 10. Denny Hamlin was fourth ahead of Martin Truex Jr. in sixth and Christopher Bell in seventh.

To run at that level, especially on a high-downforce track so early in the season, anyone associated with the No. 18 car would be excused for having a high level of optimism going forward. The finish also meant a lot to Busch as it came in his first race with Ethel M Chocolates on the car.

“I remember being there as a kid, a little bit anyways, I was five so it’s a little shady,” Busch said. “Certainly, my grandmother is smiling from above so, it was really special to have that on our Camry today.”

Busch and his team will look to continue their momentum next week at Phoenix Raceway, where he has three wins, 12 top fives and 22 top 10s. Coverage for the Instacart 500 is set to begin on Sunday, March 14, at 3:30 p.m. ET on FOX.