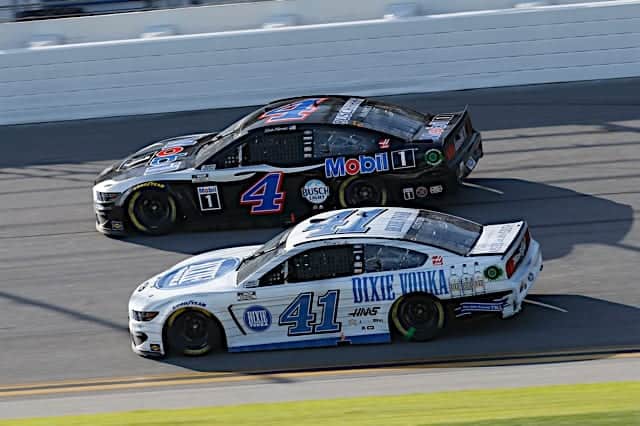 ONE: Stewart-Haas Racing Slump Gets Deeper

Kevin Harvick sat on the pole for Sunday’s (March 7) Pennzoil 400 driving his No. 4 Ford for Stewart-Haas Racing. It was a great position to assert himself up front at a Las Vegas Motor Speedway track he led 92 laps at last March.

Instead? Harvick never led a single lap, plummeting right from the start and never earning a single stage point. A driver who won a season-best nine races in 2020, losing just three laps all season, ended the race a lap off the pace in 20th.

It was a shocking result for a team used to sprinting right out of the gate. In four of his eight years with SHR, Harvick has already won a race and clinched a playoff spot by this point; he’s been that good. 17 laps led are by far the fewest for him four races in as he’s had up to 482 by comparison with Rodney Childers as his crew chief.

Should SHR be concerned? At least Harvick is a Hall-of-Fame caliber talent, entering Vegas three-for-three on top-10 finishes despite inferior speed. He’s made chicken salad out of, you know, sitting seventh in points and keeping the flagship team above water.

The rest of the organization isn’t so lucky. Aric Almirola, Cole Custer and rookie Chase Briscoe have gone a combined 0-for-12 on top-10 finishes. They’ve got more DNFs (two) than laps led (one) and watched middle-class Ford teams take over the country club. (See: Chris Buescher, Homestead-Miami Speedway and Michael McDowell in the Daytona 500.) A team that once was in position to send four teams to the Championship 4 in 2018 has just one in playoff position thus far in 2021.

What’s the problem? A closer look shows the cracks formed last fall, when the four-car team earned just one top-five finish in the final seven races. 4-for-4 in postseason bids, they sent just one team into the Round of 8 and then watched Harvick’s career-year performance get torpedoed. Despite the slump, decisions were made this offseason to keep each crew chief in place while a retiring Clint Bowyer was replaced in the driver’s seat by Briscoe.

It’s the rookie who’s struggled the most, claiming after falling two laps down at Homestead, “It took me until halfway through the race to understand what I needed to do.” A lack of practice time has clearly hurt a freshman who never had a single Cup start before Daytona.

It’s worth noting Briscoe piled up trophies in the NASCAR Xfinity Series last year, building confidence. Rival Austin Cindric is still doing so in 2021 before making a seamless Cup transition in the NextGen car. If it takes the whole year for Briscoe to get going, questions will be raised whether the move was worth it considering the No. 98 program he left has three DNFs in four races with Riley Herbst.

Almirola and Custer, meanwhile, are bubble drivers watching their playoff window shrink with every upset. Almirola, in particular, has only won twice in his career and could be on the hot seat during a crazy Silly Season.

I keep thinking about how Tony Stewart may have foreseen this problem. He tried hard to land Las Vegas winner Kyle Larson, keeping Briscoe in NXS, but “couldn’t get partner approval.” Then, Eldora Speedway also slipped off NASCAR’s schedule in favor of dirt races elsewhere while Stewart’s happiness and off-track interests increased with new NHRA beau Leah Pruett.

It makes you wonder where NASCAR fits on Stewart’s current priority list. Almost daily, a new driver or test session gets rolled out for the Superstar Racing Experience (SRX), a new primetime racing series he’s pioneering set to air in CBS primetime this summer. Millions are invested in a new idea that could spark instant popularity with names like Michael Waltrip, Helio Castroneves, Bill Elliott and others.

That leaves Gene Haas, also focused on Formula 1, in charge of a funded driver (Almirola), the son of the SHR President (Custer), a man with three years or so left (Harvick) and the uncertainty of Briscoe. Remember when Haas alone was in charge of the program? It didn’t do so well. The millionaire had just one top-five finish in 284 Cup starts before Stewart entered the fold in 2009.

Harvick and Childers are too good to stay down for long, but this trend is worth watching. Good teams will get squeezed out of the playoffs with these early surprises, and SHR could be the odd man out without a little extra TLC from the right people.

Post-race celebration around Kyle Larson’s Vegas win made NASCAR’s stance crystal clear: This driver’s suffered enough. From the Brad Keselowski handshake to kudos from Bubba Wallace, the popularity of Larson’s win was palpable inside the garage.

Wallace’s appreciation for Larson is genuine (although it should be noted both men share the same agent, Rod Moskowitz). Larson has also gone above and beyond his required diversity training since a racial slur got him fired from Chip Ganassi Racing last April. From volunteering at the Urban Youth Racing School in Philadelphia to visiting George Floyd’s memorial in Minneapolis, Larson’s made a concerted effort to show he’s changed. The bank account took a hit, too, anywhere from $6 to $10 million, according to an estimate released this week by the Sports Business Journal.

Whether the fans will buy it is anyone’s guess. I lived in Philly for almost 15 years, and Larson’s scenario feels so much like when Michael Vick rose back to NFL superstardom. He resurfaced with the Philadelphia Eagles, rejuvenated after spending 21 months in federal prison for animal cruelty and operating a dogfighting ring. While the quarterback brought the team success, leading them back to the playoffs and even earning a Pro Bowl appearance, a large portion of the fan base never accepted him. Opinions were too baked in that community outreach and constant apologies did nothing.

I suspect we’re in that window with Larson now. If you still hate the man after this win, chances are your mind’s not going to change. It feels like a vocal minority at this point, but how loud that percentage is could mean millions. No matter how many drivers shake hands, sponsors will still hesitate to jump on board until it’s clear a large portion of the fan base has moved on.

Yet the most underrated chemistry/redemption story has developed in the NASCAR Xfinity Series with a driver and team. AJ Allmendinger and Kaulig Racing have now won four times in 20 starts together. That’s an absurd 20% win percentage for a guy who won a combined nine races elsewhere throughout a career in Cup, NXS, the Truck Series, open-wheel (CART) and sports car racing.

Keep in mind the ‘Dinger was left for dead after several years underachieving at JTG Daugherty Racing. It was the same driver who was known for losing his dream ride at Team Penske over testing positive for Adderall in 2012. Matt Kaulig convinced him to come out of retirement, bought into the fun-loving personality and let AJ be himself. What’s transpired is one of the most entertaining radio channels to listen to on raceday and a driver who’s found a second lease on life approaching 40.

So often, we see it in this sport: Joey Logano with Joe Gibbs Racing, Harvick with Richard Childress Racing. Sometimes, it’s just the wrong situation and a driver’s talent gets lost in the shuffle.

Kudos to the ‘Dinger for finding his way back.

Much was made of NASCAR Camping World title sponsor Marcus Lemonis sponsoring a large chunk of the field this past weekend at Las Vegas. But does it really matter? A full field of 40 trucks contested a race that, a few years back, had its September event struggle to pull in 30 trucks.

Over in the NASCAR Xfinity Series, new teams for Jordan Anderson and Ronnie Bassett Jr. are getting screwed by 40-car field limits. 42 or 43 teams are being entered each race, causing a handful of DNQs despite no real qualifying on speed. Yet there weren’t days too long ago NXS was on life support, a division where less than 30 cars intended to run the full distance each week.

For both minor leagues to be healthy? Bursting with owners in the middle of a pandemic? That’s something NASCAR should truly be proud of. Look how the feeder divisions in other stick-and-ball sports (particularly baseball) are hurting. Protecting and enhancing NXS and NCWTS was one of NASCAR’s great accomplishments under the Steve Phelps era.

Yet you can argue both men are fourth in the pecking order at their respective teams right now. Here’s Elliott’s year in a nutshell: spin out friend Blaney and lose the Busch Clash, invisible at the Daytona 500 until a late surge to second, a win-turned-rain catastrophe at the Daytona International Speedway road course, a ho-hum 14th at Homestead and spinning out in the final stage at Vegas (13th).

Compare that to teammates Byron and Larson, both of whom have won. Even Alex Bowman, while 18th in points, has a pole based on speed (Daytona) and more top-10 finishes than Elliott.

Let’s take a look at Kyle and JGR. One teammate, Christopher Bell, has won. Another, Denny Hamlin, leads the points with a series-best 150 laps led. And Martin Truex Jr. was third and sixth these past two weeks, showing the most JGR speed on intermediates.

It leaves the sport’s two recent champions with plenty to prove heading to Phoenix Raceway. Keep an eye on them this weekend.