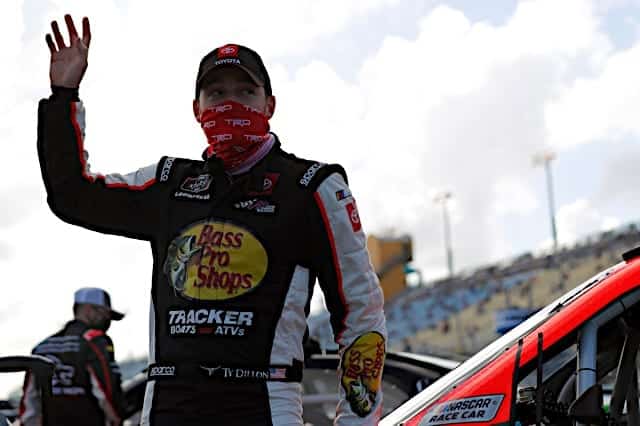 Near the end of a roughly 15-minute monologue posted Monday on social media, Ty Dillon reminded his audience of an important fact.

“I’m not a philosopher, I’m not a perfect speaker.”

He’s just a NASCAR driver with a platform.

The 29-year-old driver decided to use it to let us all know that for a brief, emotional moment Monday while sitting on his kitchen floor, he threw in the towel.

“I can’t do this anymore, the stress is hurting my heart,” Dillon told his wife, Haley.

I talk about the truth of the emotional grind of racing, how I am dealing with the unknowns of my career and that there is so much more hope beyond the here and now!

In case you’re just tuning in, Ty Dillon is going through a lot professionally in a relatively short amount of time.

Late last year, he lost his Cup Series ride of four years after Germain Racing closed due to a lack of sponsorship.

Dillon has since joined Toyota Racing, splitting time with 23XI Racing and Gaunt Bros. Racing in the Cup Series and Joe Gibbs Racing in the Xfinity Series. Through five weeks of racing, he has next to nothing to write home about, having failed to make the Daytona 500 and finished 14th or worse in his three Xfinity starts.

At Homestead, his day ended on lap 102 after a bolt went through his radiator. On Saturday, he finished 31st at Las Vegas after being involved in two incidents, one the result of a radio that wasn’t working.

“To start these first three opportunities in some of the best equipment I’ve ever gotten an opportunity to drive” and not have anything to show, “it definitely (wears) on you,” Dillon said.

“Being at home and having to watch another Cup race on TV is not easy when you feel like you mentally and physically should be in the race there,” Dillon said.

He acknowledged “this may sound like whining and complaining, but this is just my life and I want to transfer it straight to those who care and are interested. … It’s all within good perspective of I’m very blessed to get to drive racecars. This has been my career. But this has also been my whole life and just like anybody else when you’ve worked really hard for something … You want to see it through, you want to see it to what your end goal was.”

But in the last few months, Dillon’s “opportunities have dwindled and become few and far between, which makes you really aggressive and hungry when you do get the opportunity to go try to prove a point.”

And for a brief moment on Monday, it was too much.

“Like a typical man, I was grumpy and mad and wanting to blame things on everybody else,” Dillon recounted. “As a man, it’s sometimes tough to release your emotions when you’re hurt and you’re upset. I just broke down today in the kitchen of our house … I want to I want to be a top series NASCAR driver, and I want to be a top-notch dad and husband and be able to do it all well and have it all go good. And right now the racing side is really hard and uncertain. And I think that uncertainty just drives anyone crazy, when you don’t know what’s coming around the corner.”

Dillon’s moment on his kitchen floor was just a moment. And the Toyota Racing driver wants everyone to know it’s OK to have them.

“I hope this can help people out. It’s definitely helping me to talk about it,” Dillon said. “This is what’s going on in my life. And I hope that at least somebody out there finds it encouraging.”

When someone has an emotional crisis, their first instinct usually isn’t to get in front of a microphone and record a podcast about it.

But Dillon did that.

Before this season started, I never expected to write more than one column on a driver who hasn’t won a NASCAR race since 2014. But drivers, like all people, are more than what they do for a living.

When I talked to him three weeks ago, one of the highlights of our conversation was what Dillon said about being empathetic.

“I’ve wanted to be a better person,” Dillon said. “I wanted to understand things better. And if you don’t learn, you can’t empathize. You got to empathize to be able to learn what other people are going through and to understand situations from not only your perspective in life.”

Due to the lack of success in his time at Germain Racing, the spotlight never consistently shone on him for me to give much thought to “what’s eating Ty Dillon?”

That changed last year with his Instagram conversation about race issues with Bubba Wallace. It’s continuing now, with him talking into a microphone and working out his fears, his hopes and even his passing thoughts on masculinity, at the low-point of his career.

Dillon won’t be back on a race track for 20 days. He’ll compete for Gaunt Brothers Racing in the Cup Series’ Bristol Dirt Race on March 28. After that, he’s not scheduled to race until the April 24 Xfinity event at Talladega.

“In NASCAR, 21 days feels like 21 years when you get your next opportunity to go try and prove what you can do,” Dillon said.

Dillon’s chances at a competitive NASCAR career could very well end in one month.

Dillon just now seems to be becoming comfortable with his voice. It’s one NASCAR isn’t used to having and is in danger of potentially losing.

So while he’s got your attention, hear him out.

Follow @DanielMcFadin and check out his show “Dropping the Hammer with Daniel McFadin” on YouTube and in podcast form.