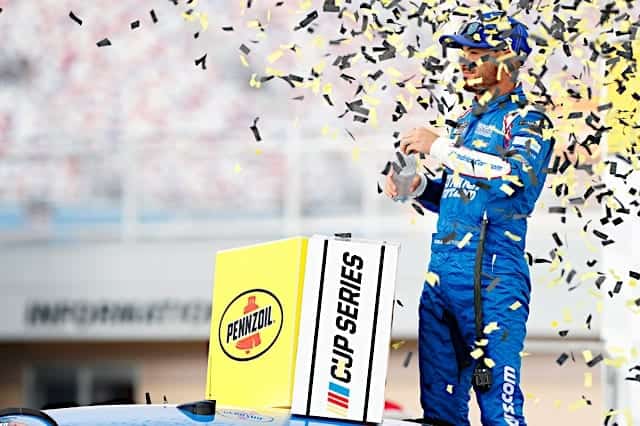 Who doesn’t love a good redemption story? Just under a year ago, Kyle Larson became the poster boy for thoughtless expression, firing off without taking into account what his words might mean to someone else. But we all do stupid things. It’s how you use the experience to better yourself that defines you. While the emotion of the day won’t show up in any statistical rundowns, there certainly are some things that will.

Larson picked up a win in just his fourth start for Hendrick Motorsports. Of the 20 drivers who have visited victory lane in an HMS Chevrolet, none did so in so few attempts. Terry Labonte was the previous such title holder, winning his seventh race in the No. 5 at North Wilkesboro back in 1994.

Interestingly enough, both drivers’ first wins in the No. 5 ended long winless streaks. Larson hadn’t been to a winner’s circle since Dover in the fall of 2019. In fact, before Sunday, that was his only Cup win in the past three and a half years. Labonte finally got his win after enduring four and half years of finishing second or worse. Two years later, Labonte was hoisting the series championship trophy. Will Larson follow suit? It looks like this group is definitely heading in the right direction.

Larson also won a Cup race on a 1.5-mile track for the first time after finishing second nine times. No driver in series history had more runner up results on mile and a half tracks before picking up their first win.

With Alex Bowman finishing 18th at Las Vegas, the No. 48 car has now gone 135 races without a victory. From the beginning of Jimmie Johnson‘s rookie season to his final win at Dover in 2017, the No. 48 only once went 135 days without winning. Not to mention that number includes off-season days. The NASCAR landscape has changed much in that span and no one wins forever. But with the recent performance of the other HMS cars, it’s starting to look less like Johnson being past his prime was the reason.

Last season, Chase Briscoe completed 99.5% of the laps in the NASCAR Xfinity Series, winning nine times along the way and narrowly missing out on the championship. Rightfully so, Briscoe was moved up to the Cup level and his replacement, Riley Herbst, has apparently found all the misfortune that Briscoe avoided. Herbst has finished just one of the races thus far in 2021 and has completed only 63.7% of the laps run. Crashes have resulted in the No. 98 being loaded into the hauler before the checkered flag waved, including a lap 56 melee that left him last in the final rundown.

There have been no repeat winners in either Cup or Xfinity after each series has run four races this year. The last time both tours began the year with five different winners was back in 2003. Considering the wide assortment of winners so far, matching or even exceeding that feat is a very real possibility.

A total of 13 drivers have led a lap in one of the three Truck Series races in 2021. However, notably absent from that list are both Matt Crafton and Austin Hill. Crafton, a three-time champion, has been competitive with finishes of 16th, sixth and fifth. His lack of any laps led could be attributed to the roulette wheel that is the Daytona oval and the mere 51 laps that comprised the Daytona road course event.

Hill, on the other hand, has not enjoyed the start of 2021. He left the coast of Florida with finishes of 22nd and 33rd before rebounding with a third in Vegas. Perhaps it was just a rocky start and he could break out at any point. Still, it is uncharacteristic of the driver many considered to be a preseason title favorite.

Put it all on the line last night trying to get in victory lane. It all came down to the last restart and who could get the better push. Came up short with a p3 finish for our Ibaraki Toyopet Toyota Tundra but solid night overall. Pit crew was on it! Ready for ATL. #TeamToyota pic.twitter.com/8nz3QF8BvO

The Cup Series continues to wander the wild west this week as the next stop on the road will be at Phoenix. Kevin Harvick is a fantasy sports dream pick, as the veteran driver has not finished outside the top 10 at Phoenix since March of 2013. To put that in perspective, eight of the top 10 finishers in that race have since retired.

Harvick has won nine times on the desert oval and will be considered a favorite once again this week. His stat sheet at Phoenix is better there than at any other track, and I wouldn’t expect that to change any time soon.

Technically, the information about the 48 team is not correct. The 48 team became the 5 team and the winless streak for the former 48 team ended with the race at Las Vegas with the same car, crew, and crew chief that Jimmie Johnson concluded his career with. The 88 team swapped numbers with the # 48 and that team is the same as last year’s with only the # being changed. It is true that the #48 is on long winless streak, not the team or car itself.