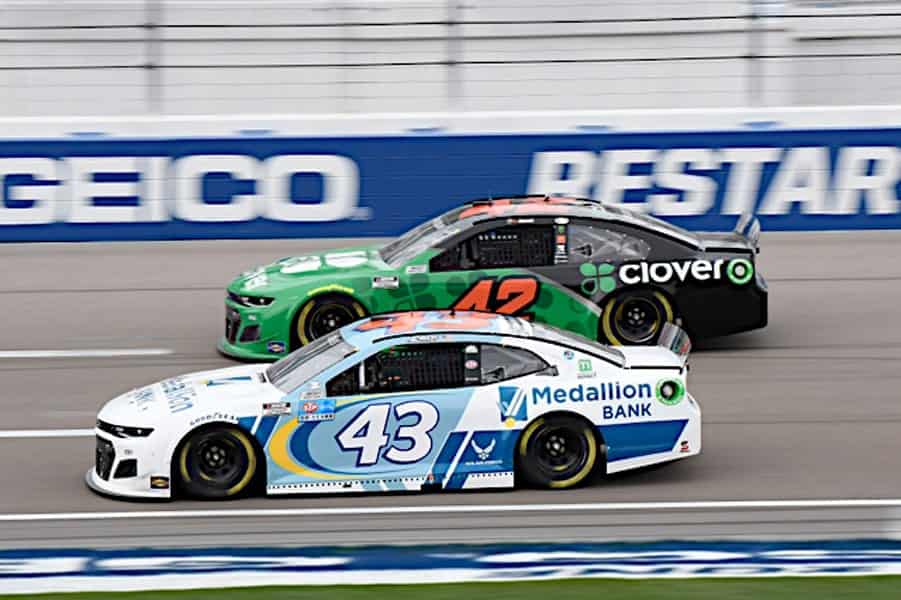 2021 looks different in many ways for Richard Petty Motorsports. After a year where they ended up in the national spotlight with Bubba Wallace, the team faces an identity shift in 2021 with Erik Jones.

While crew chief Jerry Baxter stayed with RPM following Wallace’s departure, the team was faced with a tough decision to find who would guide Richard Petty’s iconic No. 43. Not only would this driver have to come into a role that already heavily scrutinized, but they would need a rare talent to help land sponsorship, much of which was tied to the popular Wallace. With all of the Silly Season craziness in 2020, the team managed to land a gem in Jones.

Four races in, they finally have a finish to show for it.

2021 did not start off well for the new-look No. 43 team with disappointments of 39th, 14th and 27th in the first three races. But Sunday’s (March 7) Pennzoil 400 at Las Vegas Motor Speedway showcased the potential for this team, as Jones brought home his first top 10 of the season with a 10th-place result. It marked RPM’s first top 10 since Daytona International Speedway last August and one more than former driver Wallace with his new ride at 23XI Racing.

The road to get here was a rollercoaster, though. Jones broke into the top 20 before the lap 25 competition caution after starting 29th. He would not stop there, breaking inside the top 15 before settling into 17th by the end of stage one.

At the beginning of stage two, Jones saw his day flash right before his eyes. In a large pack of cars on the restart, he got loose off of Turn 2 and made contact with the wall. But the damage was minimal, due to a heck of a save, and Jones was able to keep running at full speed. He ultimately finished the stage in 18th.

Jones hung around just outside the top 10 for most of the final stage. With just under 20 laps to go, the No. 43 broke into the top 10 for the final time. The Byron, Mich., native earned his first top-10 result since the Charlotte Motor Speedway ROVAL with Joe Gibbs Racing’s No. 20 Toyota.

“It was a really good day for us in the Richard Petty Motorsports Medallion Bank Chevy,” Jones said of Sunday’s performance. “It was a good day to build on. It was way better than last week. We’re really headed in the right direction.

“We tried a lot of different things this week and made a lot of different changes, and it’s just nice to see them pay off and get a top 10 out of it. That was definitely our goal for today, I felt like. So, hopefully we can keep building on that and continue to get better and better each week.”

It has been quite a journey so far in 2021 for Ryan Preece. It has been said numerous times over the course of the young season that Preece is in an unchartered JTG Daugherty Racing Chevrolet. A full year of racing is not guaranteed due to sponsorshipp concerns. However, any off-track drama hasn’t discouraged him, as the third-year driver now has two top 10s and three top 15s in four races.

After battling handling issues in the beginning of the Vegas race, Preece’s car came to life, finishing 19th in stage one. In stage two, Preece’s No. 37 Chevrolet entered the top 15 and stayed there for a solid 15th-place result.

Preece entered the top 10 near the beginning of the final stage before fading outside the top 15. But the Berlin, Conn., driver was able to muscle his way to a 15th-place finish by the end. There is a long way to go for the team, but the 30-year-old now sits a respectable 13th place in the standings. It’s going to be hard for JTG to pull the plug when their driver is sitting in playoff position now, isn’t it?

“Trent (Owens, crew chief) did an excellent job on pit road of adjusting every time we came down and getting our car to where it needed to be,” Preece said of his Vegas run. “We were strong at the end and I’m proud that we were able to hold our track position and get a top-15 finish out of it. We’re running really strong between us and our teammate and all we can do is keep digging.”

Entering the Pennzoil 400 at Las Vegas, Kevin Harvick and Michael McDowell were the only NASCAR Cup drivers to earn a top 10 in every race thus far. Both streaks came to an end on Sunday, but McDowell continued to put a solid run together with a 17th-place performance. His teammate Anthony Alfredo earned his second-straight top-25 finish with a 24th-place result.

The NASCAR Xfinity Series also took to the mile-and-a-half track on Saturday, March 6. Brandon Brown was the storied underdog of the race, running in the top 10 for a good portion of the event. He even passed drivers from top-tier teams like JR Motorsports and Joe Gibbs Racing in making a run to the front. Ultimately, the Woodbridge, Va., native finished 11th.

Santino Ferrucci also made some noise in the dog yard on Saturday. The IndyCar-turned-NASCAR driver rebounded from a learning experience at Homestead-Miami Speedway to finish 13th in only his second career start. Tommy Joe Martins (15th) also earned his first top 15 of the season.

The NASCAR Camping World Truck Series returned to the track in the Nevada desert as well (trust me, Camping World was very present). Many accidents cost some drivers top-tier performances, but a few emerged from the fray with impressive results. Parker Kligerman continued to overachieve at tiny Henderson Motorsports, scoring an eighth-place finish, while Austin Wayne Self earned his second-straight top-15 result in 14th.

Both the NASCAR Cup and Xfinity series stay out west, running at Phoenix Raceway, while the Truck Series heads back east with the week off. McDowell’s Cinderella 2021 season continues, as he will look for his fifth-straight top 20 at his home track. The Phoenix, Ariz., native finished 16th in the March race there a year ago in one of his stronger runs back then driving the No. 34. Wallace will look to get some positive momentum, meanwhile after a power steering issue derailed him at Vegas. He ran 15th at Phoenix in his finale driving for Richard Petty Motorsports.

In Xfinity, Brown should again be a favorite to land as top dog in the series. He finished 12th in both races at the dogleg-styled track in 2020. Any close competition should come from Jeremy Clements, who was 10th in the season finale back in November.

Great rebound from last week as Jones gets his first Top-10 finish in the No. 43 Chevy. On to @phoenixraceway! #RPMotorsports #NASCAR pic.twitter.com/32RfaBFIE4

Not quite the day that we had hoped for, but still a decent run.

Thank you to @LovesTravelStop for coming on board! Looking forward to having them back on the car next weekend at @phoenixraceway as well. pic.twitter.com/yHRY61mg3K

I’m so thankful to @GreenTechEnerg3 for coming on board and I’m so proud to give them a solid result at @LVMotorSpeedway! pic.twitter.com/Fj3f8ny1Kz

Great day, 13th at @LVMotorSpeedway in @SantinoFerrucci second ever stock car race. Great job @Team_SHR26 and thank you @ToyotaRacing. This team is working hard every day (and night) pic.twitter.com/QALeBupfYT

We needed a Top10 and a clean truck to go to Atlanta – we did that. Thought we maybe could have got a top5 but ripping the top just didn’t work as well as I hoped pic.twitter.com/VXf0wdP4Xs

will be interesting to see if the 43 gets in victory lane this year. hopefully they’ll have consistent runs.

Behind you 100% Erik. I like where you are at right now because you can show your talent and put Richard Petty Motorsports back in conversations. I am a Michigander that has followed your career over the past years and I did not think you got appreciated from JGR because it was all about Kyle, Denny, and Martin. You will win soon and many times after that. Keep up the great job.