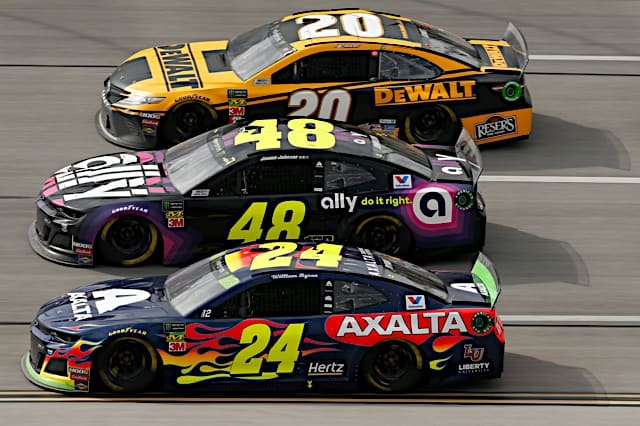 Just four races into the 2021 NASCAR Cup Series season, Hendrick Motorsports has already won twice.  Last week at Homestead-Miami Speedway, William Byron drove off to a convincing win, the second of his Cup Series career.  This past Sunday at Las Vegas Motor Speedway, it was Kyle Larson’s turn to capture the checkered flag.  Larson, in his first season with HMS, figured to be a winner at some point this year.  The fact that he was able to do so quickly bodes well for how the No. 5 team will perform in 2021.

In fact, all four Hendrick Motorsports drivers can be proud of their starts to the season.  Reigning NASCAR champion Chase Elliott has shown speed in every race and nearly edged out Michael McDowell for a win in the Daytona 500.  Even Alex Bowman, the straggler in this quartet, had a bad result at Las Vegas thanks to a late-race flat tire.  His finishes, and current 18th place points position, are not indicative of how the new No. 48 team has run this year.

Considering that all four of its drivers will most likely be in the playoffs, it is worth wondering how high Hendrick Motorsports can climb in 2021.  The organization is still emerging from some growing pains that it endured during the second half of the 2010s.  The retirements of Jeff Gordon and Dale Earnhardt Jr., along with the decline of Jimmie Johnson, forced HMS to adapt.  No longer able to rely on its traditional stars, the team had to adjust to a new reality.  In the absence of Hendrick’s veterans, a new crop of young, untested racers stepped up to take control of the team.  For an organization like HMS, it was completely uncharted territory.

BOWLES: Inside Hendrick’s push to become the face of NASCAR’s Youth Movement

Note that the 2021 season is the first year that neither Gordon nor Johnson will race full-time for Hendrick since 1992!  In a sport where nothing seems to stay the same for long, Gordon and Johnson were about as close as you could get to constants.  Year after year, race after race, Nos. 24 and 48 piled up wins and championships.  They thrilled their fans and frazzled their competition, often driving in a class by themselves.  Despite a host of other stock car greats who have had the privilege to wheel one of Rick Hendrick’s Chevrolets, none did it better than these two.

Larson’s victory on Sunday marked the 265th win for HMS at the Cup level.  Gordon is responsible for 93 of those while Johnson accumulated another 83.  Their combined total accounts for 66.42% of Hendrick’s victories.  Additionally, Johnson’s seven championships and Gordon’s four make up 11 of HMS’ 13 titles.  Until Elliott won the Cup Series championship last year, the only driver other than Johnson and Gordon to break through was Terry Labonte.  Certainly, drivers like Geoff Bodine, Tim Richmond and Darrell Waltrip were essential in establishing a foundation for this multi-car organization.  But Gordon and Johnson were the ones who took HMS into the stratosphere.

So much of Hendrick’s formula for success relied on Gordon and Johnson that often times the team’s other drivers became afterthoughts.  Fans of the team have long lamented a “curse” that seems to plague it, as it’s almost impossible for all four HMS Chevys to be highly competitive in a single season.  No matter the roster, there always seemed to be one or two drivers who lagged behind the team performance-wise.  Unless you happened to be a fan of the “cursed” driver, it never felt like a big deal, especially when Gordon or Johnson inevitably walked away with the big trophy at the end of the year.  But it was telling that HMS never had a season like Stewart-Haas Racing in 2018 or Roush Fenway Racing in 2005, a year where every driver together on one super team felt capable of winning every week.

Instead, we usually think of Hendrick’s best seasons as the ones where some of their drivers decimated the competition, even while others struggled.  What did the frustrations of Ricky Craven, Casey Mears, Kasey Kahne or even Earnhardt mean to HMS if Gordon and Johnson were waxing the field every week?  The No. 24 and No. 48 teams delivered, time and time again, and the proof was in the trophies.  With drivers of Gordon’s and Johnson’s caliber, you could make the argument Hendrick didn’t need four equally competitive teams.

But now they do.  Gordon and Johnson have hung up their helmets, and neither have been the face of the franchise for several years.  Gordon is still involved with the management of HMS, and Johnson is no doubt a phone call away.  Yet if Hendrick Motorsports’ rebuild has revealed anything, it is that the team needs a different philosophy for a post-Johnson and Gordon world.  With four young, promising drivers, the time has never been better to embrace a new attitude of equality.

Think about some of the moves that HMS made in the offseason.  Larson was a risky hire who came with a lot of baggage, but one who could pay off handsomely if given consistently fast cars.  And Byron, who has battled through a tough introduction to the Cup Series, was reunited with his old Camping World Truck Series crew chief Rudy Fugle.  Larson and Byron were the two biggest question marks with HMS at the outset of 2021.  However, they are the ones who have checkered flags, capturing early season victories at tracks that have not been traditional Hendrick strongholds.  As for Bowman, taking over Johnson’s old number represents a significant level of confidence in his abilities from the Hendrick brass, no doubt bolstered by his strong finish to the 2020 season.

Elliott is likely to remain the top priority going forward, given his immense popularity and defending championship status.  Yet this new version of Hendrick Motorsports appears to have a more equitable balance among its drivers and teams than previous lineups did.  It would be nice to see a little more raw speed from Bowman, but so far, there is no “cursed” HMS car in 2021.  As the season progresses, it will be interesting to see if that trend continues as all four Hendrick drivers continue their march into the playoffs.