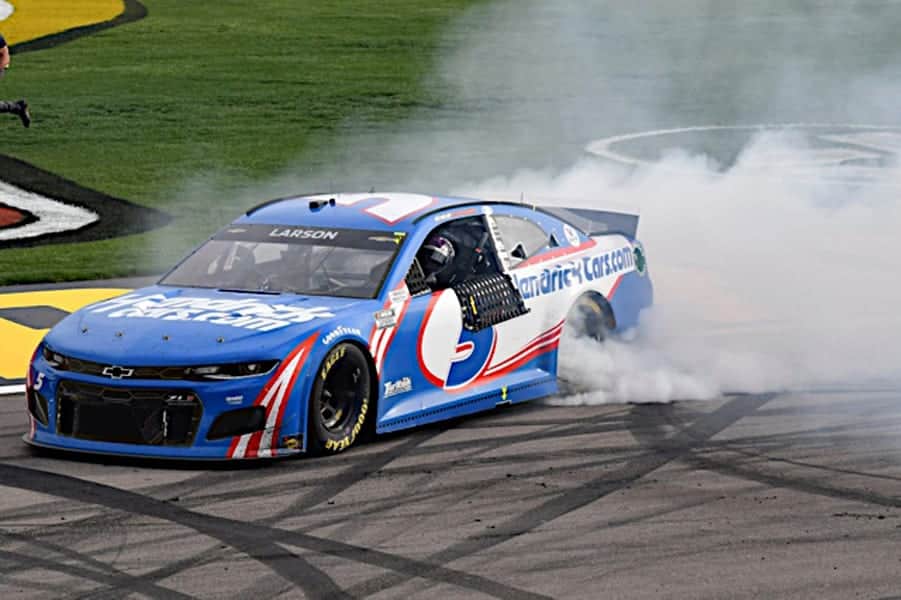 The past 10 months of Kyle Larson’s life have been a roller coaster, but the wild ride peaked on Sunday (March 7).

Larson led 103 laps to dominate and win the Pennzoil 400 at Las Vegas Motor Speedway. It’s his first NASCAR Cup Series victory at Hendrick Motorsports and first since losing his job last year after uttering a racial slur in an iRacing event in April 2020.

The team behind him showed its belief in Larson by hiring him to drive the team’s flagship No. 5 car, paired with the same group that Jimmie Johnson finished his illustrious career with in November.

To execute, though, was all on Larson. And it took just one month for the talented 28-year-old to deliver after Hendrick picked him up off the scrap heap.

“I didn’t know if I’d ever have an opportunity to win a NASCAR race again,” Larson said. “To get this awesome opportunity with Hendrick Motorsports and Mr. H taking a massive chance on me, then going out there and being strong all year, it’s been great.”

As Larson celebrated his first victory since October 2019 on the frontstretch, he was visited by a familiar face – fellow competitor and the race’s runner-up Brad Keselowski. The 2012 Cup Series champ offered instant kudos with a handshake in front of a sold-out crowd.

“That was really special to see Brad walking across the infield to come congratulate me, then waiting while I completed my interviews and things,” Larson said. “He’s somebody that I really respect and look up to as a driver, a leader, all of that. I definitely feel like we built a friendship over the last really probably five or six years.”

The gesture was one that seemed to legitimize Larson’s rehabilitation. It represented much of the mindset of the sport’s drivers’ fraternity, as evidenced by their post-race comments, while serving as a significant public display of solidarity.

Keselowski, despite coming home second after leading 27 laps at Vegas, opened up about the support he has for Larson as the driver continues his path back to NASCAR stardom. It’s a long way now from last year’s mistake — an understatement, to be sure — that cost him a job driving the No. 42 car for Chip Ganassi Racing.

“I’m just really happy for him,” Keselowski told FOX Sports after the race. “I know he’s been through a lot over the last year. He’s a good kid. I’ve known him for a little while, he’s got a good family and just happy to see him bounce back.”

Keselowski went on to say in his post-race Zoom that many drivers are rooting for Larson, to some extent.

“I think everybody loves a good redemption story, and he’s fought really hard for his opportunity to come back, and he’s making the most of it,” the Team Penske driver continued. “So I’m happy for him, and I think I told him that.

“I think we’re all pulling for him.”

That was evidenced on pit road after the race as television cameras caught Denny Hamlin and William Byron both approaching Larson to offer congratulations.

The most notable display of unity, though, came in victory lane, where Bubba Wallace, the Cup Series’ lone Black driver, went to give Larson a handshake and celebrate with him immediately after the race.

When Larson’s slur rattled the NASCAR Twitterverse a year ago, he immediately called Wallace and left a text message five minutes after the incident. Wallace didn’t entertain a conversation with Larson until the next day, when they spoke over video chat, but the two have since talked extensively and cleared any apparent grievances.

“It meant a lot to have Bubba come to victory lane,” Larson said. “He always does a really good job of congratulating the winners. I saw him waiting to say hi or whatever to me as I ran over there, and just had a quick moment with him. He said congrats. He’s always believed in me. So that was special. Just really cool to have him come by and take time out of his post race where he could be on his way to the airport to go home.”

Even Bill Lester, a former competitor in the NASCAR Camping World Truck Series and the last full-time Black competitor across the sport’s national series before Wallace, lent a shout of solidarity via social media.

Congrats @KyleLarsonRacin. You got your second chance and absolutely made the most of it! Your talent was never in question, only one of your decisions. #NASCAR

Now, with the road to redemption reaching a crucial step, how far can Larson go? Considering the speed of Hendrick Motorsports thus far in 2021, his ceiling might be higher than ever.

Kyle Busch, who finished third in Sunday’s race, noted Hendrick’s strong start as a whole – Larson’s teammate Byron led 102 laps at Homestead-Miami Speedway one week ago en route to a win – but pointed to Larson’s talent as the driving force behind the team’s surging start to the season.

“Larson’s obviously a talented [driver] and he’s done a fantastic job in the races he’s had so far […],” said Busch, another past driver of the Hendrick No. 5. “There was no keeping up with him. Those guys have got it going on and have done a nice job. It was impressive to see and congrats on him getting a win this early in the season and for him on his return.”

Larson is showing that success is likely coming his way this season regardless of whether his fellow competitors respect him or wish him well. But for now, the drivers he’s racing door-to-door with on a weekly basis are saying and showing they’ve got his back.

To bad Fox Sports doesn’t show the Victory Podium celebration/interview anymore. Bubba missed out on making himself part of the story on live TV.

If anyone told me before the race that Bubba would be going to Victory lane I would have had a heart attack.

Eric Jones gets a top 10 before Bubba. Shocking!

Gotta be all for Larson. Need to bring in sponsors, gotta prove hes a really nice guy, may be, I dont know, and remind everyone that everything is great in Nascar. Meanwhile the band plays on.

I would love to see Victory Lane celebrations. I do love how happy Larson was that he stood ON TOP of his car. Nascar usually says that is a no-no, because it can affect post race inspections via the roof damage causing templates not to match–this is why we see burn-outs all the time now after the race. If I were a driver though, I’d not do a burn-out but do something totally different like patting the “tail” of my car or kissing the hood. Nascar has great racing right now, we are just in a totally different generation of cellphone addicts and attention span deficits. But being inclusive is great for the sport–definitely need more Jordans, Kamaras and ya know, I wouldn’t mind if Hallie Deegan works hard enough at actual driving versus IRacing and becomes a star. Danica P was before her time and couldn’t really get a handle on a heavier car but maybe, somewhere in the ranks, someone like Deegan or Gracie Trotter will become a star. Of course, as always I say that I am NOT a fairweather fan. I don’t like stage racing because it takes away some of the opportunity for mechanical failures in long runs, comers and goers, etc, and I also think NASCAR trying to have a stick and ball playoff format is dumb. My man has won 3 regular season championships and one single race title. He would have 4, Gordon would have had his 7, Stewart would have two and JJ, 4. Nascar was always a bit different from other major sports and this difference created interest. The personalities in racing today are great and a return to the roots…short tracks and a full season champ would generate much more interest. However, with Jim France at the head, things are looking up. Rumor has it the next-gen car may be used at the all-star race in Texas. I also liked the underglow although it should be around the full car. I don’t know yet what I think about the door numbers being moved back….racing on the dirt at Bristol is going to be a lot of fun, though I think the race should be 300 laps and not just 250. Fontana is going to be a short track in 2023 and BMS and the city of Nashville recently signed a letter indicating investing into renovating Nashville Fairgrounds–now just imagine if suddenly Nascar said–Goodbye one pocono, we are going to South Boston! (since the owners are the same) and then welcome back Wilkesboro and the Rock. I would love it. Some “cookie-cutters” make for good racing–Kentucky was great but others, like Dover are good also. The point is that there are a lot of tracks that make for great racing, they could also expand and do two races a week but the costs now are prohibitive-UNLESS, they went to an almost STRICTLY STOCK model-say a production car with a role cage and safe windows–but even production cars now are about too fast for that. Point being that Nascar is moving in the right direction and is around to stay. I sincerely wish that many of these negative commentors I read at the bottom of these articles will realize that for the sport to thrive, you must SUPPORT IT. I will forever.

Kyle IS a nice guy, always has been since Elk Grove. Class act Brad, and good race.

Bubba is such a hypocrite. When the nonsense first broke, Bubba could have ameliorated the whole situation by saying “nothing to see here folks” but instead fanned the flames by saying he was “so shocked and horrified”. NASCAR and Bubbas PR dept. ran with that b.s. job just to make some brownie points with the BLM crowd who could care less about NASCAR. And now there he is all smiles in the winners circle after he threw Larsen under the bus a year ago. Thats the closest he will ever get to the winners circle.

You are a Loser Bubba Gump..Until you can drive a car and Win 1 Race stay the hell outta the Media!!