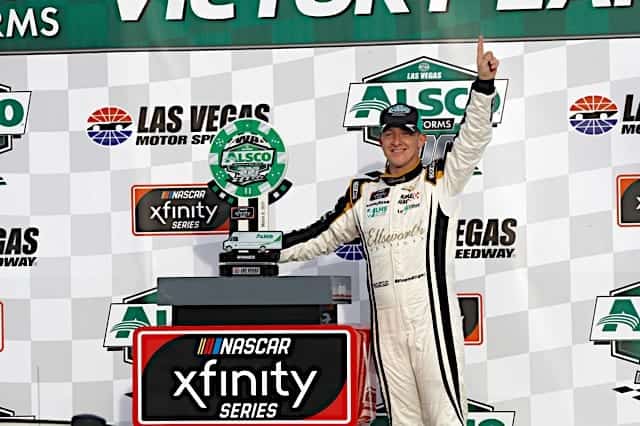 Kyle Busch came up one spot short of the Camping World Truck Series win in his hometown of Las Vegas but made headlines by spinning out on the apron with a flat tire, deemed intentional to many. Busch didn’t admit to doing so, but reading between the lines all but said he did indeed spin purposefully.

How should NASCAR police these intentional spins?

Q:  The Dinger looked pretty solid on Saturday, and has gotta be on the short list for championship favorites. But what about beyond this year? Do you think he’s eyeing a return to the Cup Series? – Brandon K., Knoxville, TN

A: Conventional wisdom would suggest that a driver in his statistical prime (39 years old) who clearly has more to give and talent to match what the Cup Series demands. Sure, he has that one Cup win at Watkins Glen back in 2014 to his resume, and a pair of top-five finishes at Martinsville as well as three at Daytona in his career.

It’s not like he did it all in semi-competitive equipment, either. His time at Team Penske provided him the opportunity to capitalize on the best chance he’d had in his career to that point. But he didn’t (at least not enough to stay in top tier stuff), and so started the next chapters of his driving career.

Fast forward to the here and now at Kaulig Racing, where he’s already a winner in 2021 and won twice in his 11 starts last season. It was expected that Allmendinger would contend for wins weekly and be a championship contender, so his Las Vegas triumph isn’t a surprise. But how many more times will be grace victory lane this season? And could it potentially lead to something bigger and better?

That depends. The main variable is if there’s a seat available, of course. But the other elephant in the room is whether or not Allmendinger wants to and if he’ll have fun doing so.

“Over the last couple of years, racing hasn’t been a lot of fun. There’s been a lot of pressure on my shoulders and at some points has been unrealistic of where we should be running.’ I told [team president Chris Rice], ‘I want to have some fun. I want to go out there and contribute to the race team, try to make it better.’ That’s what (Rice) wanted.”

That quote is from last summer and rings true today. Allmendinger is on the record repeatedly stating the only reason he’s back full-time in NASCAR is because Kaulig Racing is fun. And that Rice takes a photo with him before every race to make sure their smiles reflect their attitude.

Matt Kaulig, team owner, also is on the record with his aspirations of going Cup racing in the near future, as soon as next year. Who better than a veteran of the sport and series to help a new team get their legs underneath them as the NextGen car debuts?

I’m not saying Allmendinger is a shoo-in for a Cup Series ride with Kaulig in 2022. I’m just saying once he goes on to win countless more Xfinity Series races this season and challenge for a championship, it may be hard to put a Kaz Grala or Justin Haley in that car full-time.

Q: Kyle Busch’s spin in the Truck Series on Friday looked awfully intentional. How can and should NASCAR police these spins? – Amanda T., Concord, NC

A: This is a slippery slope, but one that needs to be trekked.

Las Vegas footage of Kyle Busch spin in #buckedup200. Seems the debate is whether the spin was intentional. pic.twitter.com/EIE9utF0Iy

Busch repeatedly declined to answer whether or not his spin was intentional with a simple “nope” when asked to explain it. That’s likely because Bubba Wallace was docked points and fined $50,000 last year when admitting to intentionally spinning out to cause a caution.

Kyle Busch wouldn’t explain what happened on his spin so whether he spun to bring out the caution is left open to interpretation. What he said (or didn’t say): pic.twitter.com/E88caYiiwn

NASCAR’s Scott Miller told SiriusXM NASCAR Radio’s The Morning Drive on Tuesday that NASCAR is indeed looking at a way to police the questionable intentional spin(s), but admitted it’s tough to.

“It’s hard for us to know what is going on inside the car. We have our (Tuesday) competition meeting, and I’m sure there will be discussions on the particular one that prompted that question. We’ll kind of review it. What we can’t let, and what we will probably be more inclined to do moving forward, is having a flat tire and trying to get back to pit road is not an excuse to spin out. If we have to crack down a little bit harder on those things happening so that doesn’t become a trend, we will certainly react to that.”

But how is this policed? Is it another “judgment call” from the sanctioning body that will all but certainly result in some hits and misses down the road, or a black-and-white rule that can be clearly delineated as to what is right and what is wrong?

Anybody in their right mind would lean toward the former. Even with throttle tracing and SMT data available to the tower to make split-second decisions, perhaps making the wrong one that could, in a particular situation, cost somebody a win (or a championship).

That’s a liability. But one that NASCAR may be willing to take on, as they’d likely rather officiate their events while eliminating intent to alter the fabric of said event than let it strike and cost somebody a win (or a championship).

That’s the box NASCAR is in, and, to a certain degree, they’ve done it to themselves by letting the problem fester to this point. I surely don’t envy them in having to fix this problem. Hell, if I knew how, I would’ve just laid out a plan.

Something, though, needs to and will be done. It won’t be received well by everybody, but it’s hard to please 100 percent of the population (moreover NASCAR fans, hoo boy). Whatever it is they implement and whenever they implement it, it’ll be for the betterment of the series as a whole, and not for show.