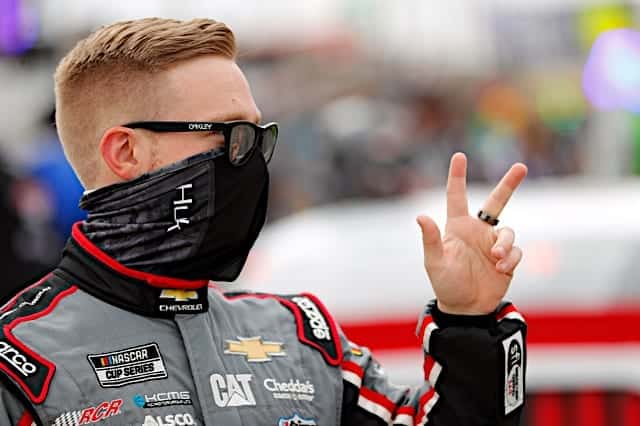 Probably the only thing standing between Reddick and victory this year is equipment. Richard Childress Racing is just a tick behind the top big teams, and that tick means that Reddick will have to work that much harder for his win.

But that will only make it sweeter.

After his charging runner-up finish at Homestead, where he was running down a dominant William Byron until he ran out of laps, it’s hard to think that Reddick won’t win in 2021. He’s RCR’s best driver, a two-time Xfinity Series champ. And he won both titles as the underdog in the story.

Remember Reddick’s first Xfinity title? He won that for JR Motorsports, the team owned by Dale Earnhardt Jr. that funnels talent for Hendrick Motorsports as well as running a handful of veteran contenders. Here’s a bold prediction: not only will he win in 2021, but in a couple of years, Reddick is going to be the one that got away from Hendrick Motorsports.

Briscoe isn’t off to a hot start in 2021, but don’t judge the rookie by his first four races. It’s true the NASCAR Cup Series is another world, but Briscoe has never finished worse than sixth in points in a full season in a NASCAR national series. He’s probably not going to continue that streak this year at the Cup level, but he’s a promising youngster nonetheless.

His season so far isn’t much to write home about, with a top finish of 18th. Not only is Briscoe a rookie, but his Stewart-Haas Racing teammates aren’t exactly setting the world on fire.  Briscoe is ahead of teammate Aric Almirola in points after four races. Cole Custer has yet to score a top 10, too. Even Kevin Harvick hasn’t picked up where he left off in 2020. The organization certainly has some significant kinks to work out, and once it does, Briscoe should see improvement. How he’ll fare long-term against Cup competition is still a question mark, but he’ll very likely win at some point.

DiBenedetto, like Briscoe, has struggled to kick off 2021. But he showed last year that he can be competitive, and it should be a matter of time before he wins. He took the No. 21 to the playoffs and elevated the team’s performance overall. In that regard, nothing should be different.

But in reality, everything is different. DiBenedetto is essentially in a full season of lame-duck status with Wood Brothers Racing. He’ll be replaced by Austin Cindric next year whether he wins races or not. And while that has the potential to make him work that much harder to prove that was a bad decision, whether the team (a Team Penske satellite) will invest the time and effort in him is a concern.

DiBenedetto is a driver who has improved every team he’s driven for and has little to show for that. He can make this the year he proves he belongs, and if he does, it’ll be that much more of an accomplishment because of the uphill battle he faces.

For some reason, Wallace’s detractors keep talking about a season without winning as proof that Wallace isn’t talented. If he doesn’t win, it’s simply evidence he doesn’t deserve a top-flight ride.

But there’s a big flaw with that thinking: 23XI is a first-year team. Yes, it has good equipment courtesy an alliance with Joe Gibbs Racing, and the organization has some experienced people in the shop and at the track. But they’re learning together. JGR didn’t win in its first season. Remember that.

That said, Wallace can win, and he probably will. Will it come in 2021? Maybe. Wallace has never had equipment capable of running with the top teams on a weekly basis before, and as his team improves and they get the cars right for him, he still needs to learn how to race inside the top 10 and top five. It’s rare to see drivers make a jump from underfunded to top equipment and win off the bat because those drivers lack experience racing up front.

But they learn. Wallace will learn, and he will improve. Then, we’ll really see if he can contend.

Need proof that equipment matters? Look no further than Preece. Of course, he’s struggled in Cup with an underfunded team. But he’s also had some terrible luck.

Look at Preece’s numbers when he’s had competitive equipment, though, and suddenly it’s a different story. In 2017, Preece got just four races in a JGR Xfinity car, and he finished in the top five in every one, winning once. That earned him 15 races in 2018 and again he delivered with 10 top 10s and a win. There was simply no plan by JGR to develop Preece, so he landed at JTG Daugherty Racing, where he’s struggled for a few top 10s.

In a good modified, Preece’s numbers are mind-blowing. He never finished outside the top 10 in points in a full season; in 2017 he finished sixth despite missing two races. A champion at 22, he finished runner-up in the Whelen Modified Tour four more times. Preece is the real deal.

His best shot with JTG is a superspeedway race because the cars are equal, and he’s shown he can run with the big dogs at Daytona International Speedway and Talladega Superspeedway. With a little luck, he could make a win happen. He’s a long shot, yes, but that’s because of what he drives, not how he drives.