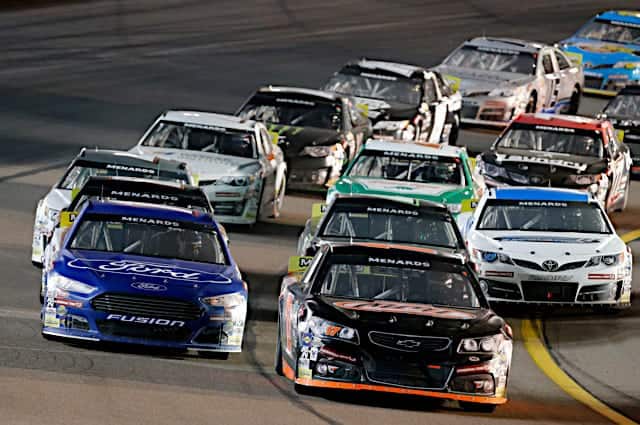 After a nearly month-long wait since the season opener at Daytona International Speedway, the ARCA Menards Series heads to Phoenix Raceway for Friday night’s (March 12) General Tire 150. Following Corey Heim‘s dominant win at Daytona, the 18-year-old Marietta, Georgia native and his competitors race over to Avondale, Arizona for 150 laps around this 1-mile asphalt arena.

Friday night’s General Tires 150 will be the second ARCA race at Phoenix Raceway.

With over 66% of the field making their first ARCA start at Phoenix, the second race of the season looks like another wide-open battle with stock car veterans and hot shots mixing it up on the track.

One of those young racers who looks to be in the fight on Friday night is 20-year-old Jack Wood of Loomis, California. Placing ninth in the season opener at Daytona, the GMS Racing driver will prepare for his second ARCA national start at Phoenix. As Frontstretch‘s Mark Kristl shared, Wood will race the full ARCA schedule for this year.

Certainly, one of the favorites heading into Friday night’s ARCA race is the trio of talented drivers from Bill McAnally Racing.

Enjoyed some nice sunny weather while preparing the camrys for the ARCA West season opener in Phoenix this Friday ? pic.twitter.com/SrFuHbaspb

With Jesse Love in the No. 16 ride alongside Derek Kraus in the No. 19 and Cole Moore in the No. 99, these three young racers seem primed for an ARCA victory at Phoenix. Kraus hopes to at least duplicate his strong eighth-place finish at Phoenix, a feat he accomplished when he started in the fall NASCAR Camping World Truck Series race in 2018.

On the other hand, Love hopes to improve on his 16th-place finish from last March and his 14th-place finish in the ARCA West season finale last year while Moore has yet to start an ARCA race at Phoenix.

Love observed the struggles he’s faced to get decent results at Phoenix and discussed the approach he’ll take heading into Friday night’s race.

“I’ve always feel like I’ve been pretty good at Phoenix whether it be sim testing or busting off a qualifying lap,” Love said in a pre-race Zoom conference call. “We’ve always kind of had some weird stuff happen (at Phoenix). Last year, when we ran the [No.] 19 car in the spring, we had a really good shot at running in the top three, top five.

“We were coming back on from old tires and cracking into the top five and had the contact with the 15 which put us in the wall. Phoenix is one of those weird deals where I feel like I’m really good but haven’t had the finishes to show it. So, we’ve just gotta keep doing what we’ve been doing and everything will take care of itself.”

Naturally, another set of contenders to consider comes from the Venturini Motorsports camp. The trio of Dollar, Trotter and Heim appear ready for the race with fast Toyota Camrys set for a fight.

Although Heim did not start in last year’s ARCA national race, he placed 25th and eighth in the ARCA West races in 2019 and 2020.

Heim observed the intensity that will be prevalent on the track with the large car count on Friday night.

“I think the competition and car count is definitely going to be higher than most tracks on the schedule, but that’s really fine with me,” Heim said in a pre-race Zoom conference call. “I’ve just gotta go out there and do my job. And I’ve got to qualify well, stay up front throughout the race, and put myself in a good position.

“So, it’s really no different than how I’d approach it on any other weekly basis. You’re obviously trying to go out there to win the pole and the race on a weekly basis. It’s a little more pressure to go out there and perform in qualifying specifically just so you don’t find yourself starting in the 20s or the 30s. As far as my competitors go, I think I’m competing against everyone. There’s not really anyone specific that I’m looking out for. I’ve just gotta go out there and beat everybody.”

Dollar (14th) and Trotter (22nd) hope that their somewhat disappointing results last March will not carry over into the 150-lap race. Instead, Heim hopes to repeat his Daytona magic while Dollar looks to improve upon his strong season opener result by one position.

Last year, Zane Smith placed a respectable fifth for team owner Steve McGowen. Returning to McGowen’s No. 17 ride for the second race of the ARCA season, Smith is pumped up and ready for a shot to nab his fifth career ARCA win.

While Toni Breidinger starts her first ARCA race at Phoenix, the 21-year-old from Hillsborough, California placed a respectable 18th at Daytona. Returning for another start in the No. 02 Chevrolet owned by Young’s Motorsport, Breidinger can’t wait to race in Phoenix.

Rev Racing’s Nick Sanchez has more than a new livery to look forward to with the second round of the season at Phoenix.

While Sanchez teased a new look for his No. 2 Chevrolet, there’s no joking around about the 19-year-old’s steady racing talents. Placing sixth in last year’s ARCA race at Phoenix, the Miami, Florida native expressed enthusiasm about his season.

“Starting with Phoenix and the rest of the schedule, I’ve never been more confident going into a year,” Sanchez told Frontstretch. “Seeing what my team has done and what Max Siegel has invested, it’s heartwarming, impressive, and a big confidence booster.”

Another driver to watch this week is 19-year-old Bridget Burgess. Driving the No. 88 Chevrolet owned by Sarah Burgess, the famed off-road racer, Burgess looks to make her ARCA national debut before setting off for another impressive form of motorsports.

The BMW Z3 will be getting ready for drifting after my ARCA race in Arizona so stay tuned! ?
And don't forget to check out @konigwheelsusa and @GTRadialUSA pic.twitter.com/sJPZTgAKGr

Drivers like Burgess, who will compete mainly in the ARCA Menards West Series, will get to battle alongside some of the very best in the national series.

Another West racer to consider on Friday night is 43-year-old Takuma Koga of Nagoya, Japan. Placing a solid 13th in last year’s race at Phoenix, the driver of the No. 7 Toyota fielded by Jerry Pitts hopes to be in the mix for a top-10 finish.

On the other hand, while Koga has some experience at Phoenix, 15-year-old Taylor Gray will make his 13th ARCA start at this 1-mile track. Gray is coming off a superb partial schedule last year in which he scored eight top-five finishes and 11 top-10 results in his 12-race season.

“The last few races at Phoenix, the No. 17 has run really well with my brother in the spring and then me in the fall,” Gray said in a team press release. “To finish third in my first race at the track was pretty cool and I think we have a great opportunity to back that up with another solid run this time. It will be my first race with the Ripper Coffee colors on the car, so hopefully we can give them a good showing.”

Although Thad Moffitt may be a 20-year-old racer, in today’s ARCA scene, he’s a bit of a veteran with 29 career starts. Moffitt, who placed 18th in last year’s race, hopes to avoid some late-race trouble in his No. 46 Ford.

“Phoenix is a super fun racetrack and one of my favorite that we go to,” Moffitt noted in a team press release. “When you get guys to move up and use the traction compound it opens the track up and allows you to use multiple lanes throughout the race. Restarts are insane too with everyone fanning out four to five-wide through the dogleg. There are a lot of great cars entered for this weekend, so it should be an awesome race.”

If there had to be an odds-on favorite for Friday night’s ARCA race at Phoenix, 18-year-old Ty Gibbs seems like a logical choice. After all, the eight-time ARCA race winner knows his way around this unusual speedway. Gibbs led a race-high 122 laps before settling for a third-place finish.

Emerging victorious in last month’s NASCAR Xfinity Series race at the Daytona International Speedway road course, Gibbs hopes to bring some of that victorious feeling to his No. 18 Toyota against his 29 on-track rivals.

Before these drivers and teams can consider the 150-lap fight, their focus will be on the sole, one-hour practice session leading up to the all-important qualifying session on Friday afternoon.

The General Tires 150 at Phoenix Raceway kicks off on Friday, March 12 at 7:30 p.m. ET with TV coverage provided by MAVTV while being live streamed on Trackpass on NBC Sports Gold.