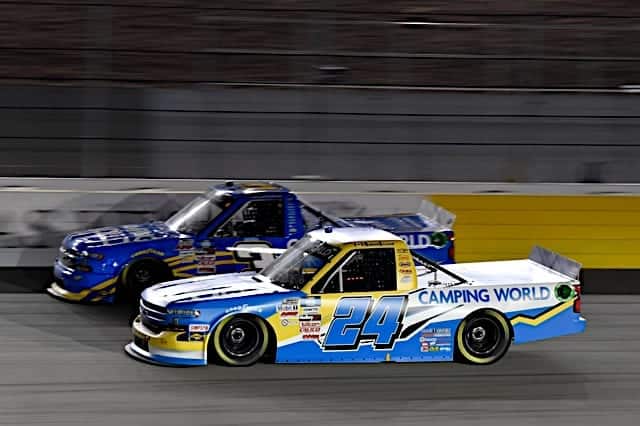 Chances are last weekend’s NASCAR Camping World Truck Series race from Las Vegas Motor Speedway was a struggle for about a fourth of the spotters guiding drivers around the track, but the final product was better for it.

For Las Vegas, Camping World CEO Marcus Lemonis offered $15,000 to any team that ran a Camping World-sponsored and -wrapped truck in the Bucked Up 200. The payout increased based on if a team were to score a top 10 or better.

A total of 10 of the 40 entered trucks pounced on the opportunity, from defending series champion Sheldon Creed all the way to journeyman Norm Benning, for whom $15,000 can make quite a bit of difference, especially amid a continuing global pandemic.

It was the latest in a compounding list of reasons why Lemonis and his Camping World company has become one of the best things that could happen to the Truck Series in recent years.

Not that the sponsorship is anything new. The company has been the title sponsor of the series for over a decade now in some capacity, mostly under the Camping World brand but also via its Gander Outdoors subsidiary for a pair of seasons. In fact, after this season, the company will have sponsored the series for the same amount of time as Craftsman did at its onset.

Some call the Craftsman days (and the title sponsor-less inaugural season) the glory days of the Truck Series, and there is merit to that argument. But the final years of Craftsman and the first few of Camping World were also, despite occasionally decent entry list sizes, sometimes marred by large discrepancies between the haves and have-nots performance-wise, as well as start-and-park trucks making it through just a portion of the event. The 36-truck field size was shrunk to 32 during Camping World’s reign, and at times the entry list dropped below even that, with a 27-racer Texas Motor Speedway event among the lowest of the lows.

But Camping World stuck with the series, and its gamble seems to have paid off in recent years. The introduction of the Ilmor engine in the late 2010s has assisted in a spike of competitive teams once more, some of whom are local racers — your Cory Ropers, your Codie Rohrbaughs — who’ve been able to take advantage of the gateway the series provides into NASCAR’s national levels and slingshot themselves into TV time on major networks.

And in Lemonis, the series has found its master promoter. The 47-year-old’s star has risen even since Camping World took over as the title sponsor, thanks in large part to his starring role on CNBC’s The Profit since 2013. In addition to that, though, he’s also philanthropic, evidenced by his 10-truck sponsorship last weekend, a trend that might even continue next weekend at Atlanta Motor Speedway, the series’ next event.

The move wasn’t just good for those 10 teams — it also thrust said teams, plus the series itself, into the spotlight on social media in ways they might not have otherwise. Even if you decide to look at it as some sort of gimmick, it worked, with the more casual viewers getting exposure to the series via the news stories covering the Camping World fleet of trucks, the mock-up paint schemes for a variety of suitors that were widely shared on Twitter, etc.

It boosted the stakes of the race, too. Though non-Camping World-sponsored driver John Hunter Nemechek won the event, the Bucked Up 200 began with a spirit of possibility, from a previous winner like Creed to smaller organizations like CR7 Motorsports and Henderson Motorsports who suddenly had the additional backing that could propel them into the conversation for victory lane. The offer of additional income based on better finishes only helped matters.

Lemonis’ $15,000 bonus joins efforts such as the Triple Truck Challenge, instigated in 2019, as just another instance of the Truck Series truly feeling like its own microcosm of the sport in a way that, say, the Xfinity Series has never really felt like it’s been able to muster in recent years. There’s an identity in the Trucks outside of being a feeder for the upper circuits. It’s got an identity.

Some of that does feel due in part to Lemonis. Neither the Cup nor Xfinity series have a personality like him, a promoter type, someone who seemingly could change the sheer makeup of a race days before it happens such as Las Vegas’ 10-truck sponsorship, or even his financial participation in the Kyle Busch bounty from last year. The Cup Series, of course, no longer has a title sponsor anyway, but even when it had them in the 2010s, there was no Lemonis type.

Whatever the reason, I have no problem calling the Truck Series the best national series NASCAR has to offer right now — and that’s been the case for a few years now, at least since 2018. Whether that’s due to Lemonis’ efforts in promoting the series, more teams willing to invest their sponsorship dollars at its roster of tracks or something else entirely, the racing has been top notch, the storylines abundant and the personalities defined.

I can’t wait to see what they cook up next.