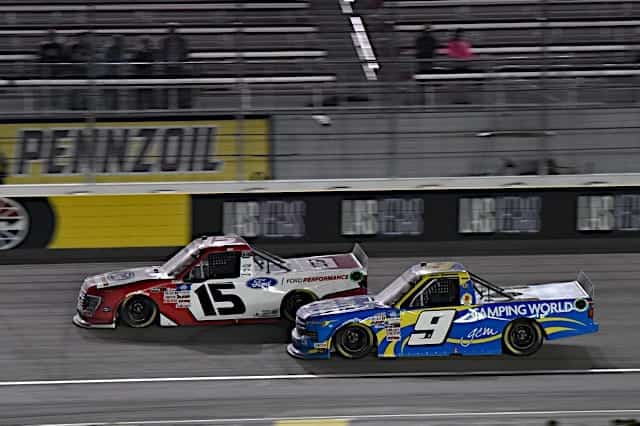 It all started with a last-minute announcement. It wasn’t until February when ThorSport Racing finalized its Camping World Truck Series lineup for the 2021 season, and just a few short months after racing for a championship and coming up short, Grant Enfinger was left facing down a part-time schedule.

According to the team announcement, former Kyle Busch Motorsports driver Christian Eckes is “tentatively” set to the pilot the No. 98 Toyota for 10 races, with Enfinger filling out the other 12.

Unfortunately it’ll be a part time schedule for me this year, but thankful for a great opportunity to win races with a great @ThorSportRacing @ToyotaRacing team and continue the partnership with @ChampionPowerEQ @CurbRecords Ready to get to Daytona! https://t.co/kmihxi0w7S

And while the part-time schedule isn’t what Enfinger wanted, the change in his status happened too late for him to really seriously consider moving into a full-time ride with a different organization.

“There were other people that reached out to me earlier in the offseason, but out of loyalty to Duke, I wouldn’t even talk to anybody,” Enfinger told Frontstretch. “I didn’t expect anything to change, but obviously it did and I understand all of that. I understand 100% where everything’s at. It’s just unfortunate the timing of it all.

“I haven’t wanted to do anything different, didn’t want things to change but it did, so now we’re going to sit here, win races and make the most of it.”

Enfinger started third in the season opener at Daytona International Speedway, led 13 laps and managed to avoid the carnage of six multi-truck incidents before settling into an 11th-place finish. But the following weekend, he was forced to the sidelines when Eckes made his ThorSport debut on the Daytona road course, a race where he finished 10th.

“[Marcus Lemonis] had reached out after I missed the Daytona road course and asked,” Enfinger explained. “That’s when we went to work with Duke and Marcus.”

But it wasn’t just as simple as putting together a fifth ThorSport truck, slapping a Camping World scheme on it and getting to Las Vegas Motor Speedway after that.

“[Lemonis] got involved, the Champion guys got back involved. Fortunate enough for me, those guys have been behind me every step of the way and are committed to get us racing, and they’ve stepped up even more,” Enfinger said. “The goal is to get back to full-time racing with ThorSport, and that may or may not happen this year from a realistic standpoint. There would have to be a lot of hoops to jump through to do something like that.”

That’s where Codie Rohrbaugh, a long-time friend of Enfinger’s, and CR7 Motorsports got involved.

“That was a deal where Codie told me a few weeks ago after the news came out that I was running part-time, he hated it for me,” Enfinger stated. “I tried to help him a little bit along the way. We have a mutual friend named Mark Huff that had brought us together that unfortunately just passed away recently. He’d come up to me and said ‘I hate everything that happened, and if you want to run my truck some time, let me know’ and was doing that out of a friend deal that I’d tried to help him out some and he was going to try to help me out some.

“I basically took him up on his offer; I called in a favor for Vegas. He was all about it so I was able to go there, go racing and have some fun,” he continued. “It would’ve been an off weekend for me, so I’m fortunate enough to have good friends like that in the industry.”

Lemonis set out to make the weekend even more interesting by offering a guaranteed $15,000 to an unsponsored Truck Series team that wrapped its truck in Camping World’s colors for Las Vegas. The deal was sweetened further with the offer of $10,000 more for a top 10, $20,000 more for a top five and $35,000 more with a victory.

“Marcus has done so much for not just NASCAR but specifically the Truck series over the years in putting forth so many incentives, extra money and sponsorships here,” Enfinger said of Lemonis’ involvement. “It’s pretty cool to see how much energy that he puts into the series.”

Enfinger started 18th at Las Vegas but finished 10th and seventh in the first two stages before settling in for what turned out to be a caution-filled stage three. Despite six cautions in the final 65 laps, Enfinger was the highest finishing driver in a Camping World-sponsored truck in seventh.

That seventh-place run isn’t the norm for the No. 9 team where Rohrbaugh has just 30 career starts, 15 of which came in a post-COVID 2020 season. Obviously, that’s a disadvantage for a driver who had just 13 Truck Series starts prior to the COVID-19 shutdown least season. Enfinger, who has “quite a bit of experience” in his career tried has tried to help Rohrbaugh the last few years.

“I think their equipment is pretty good, and this was a last-minute deal to just help with getting us to the track. I think Codie has good stuff; I know he ran good at Richmond last year,” Enfinger explained. “I think it was a good opportunity to give feedback on where their team is and my assessment of everything from setups to trucks and stuff like that.

“I feel like I was able to give them some feedback to make their program better. I feel like it was beneficial for all of us; it was a pretty stand-up thing Codie did to be good with sitting out of the truck for me to get in meant a lot to me. I feel like he appreciated it too. It was definitely something we wanted to work out in everyone’s favor and I feel like it did.”

“The culture is not the same with the guys and at the shop,” Enfinger said. “I feel like where my input does matter, equally Christian’s input matters, which it should. I think that changes things; I think that changes dynamics on how you prepare trucks. Maybe it’s something where he’s looking for a little bit differently than what I am.

“From a crew chief standpoint, it changes things. You don’t get into quite the same groove. There are teams that have been very successful having four and five drivers; it can be done and we can manage to still make a run at this owner’s championship. There are going to be struggles. I’ll run the next few races, but when Christian gets in that following race, he’ll be at a starting position penalty; it hurts our starting position when we’re changing at races we don’t qualify at.

When it comes down to it, Enfinger is a racer first and doesn’t want any off weekends, something he’s “made pretty clear” to Duke Thorson. In fact, this weekend, he’s running a late model ahead of getting back into the No. 98 Toyota next weekend at Atlanta Motor Speedway. He’s left it open to “piece more races together, whether it’s in an ARCA car, an Xfinity car” or maybe even a truck.

“I haven’t specifically talked to Duke about running other truck races, but if we can’t get it done at ThorSport – obviously everybody’s goal is to do more at ThorSport,” Enfinger said when asked about whether he’d make any additional Truck Series starts with a team other than ThorSport. “I haven’t actually broached that subject with him yet about whether it would be OK to do other stuff like I did this weekend. I just know I don’t want to stay at the house; I want to be racing something. That’s really all it boils down to.”

Whether Enfinger will be able to fill out the remaining eight open race weekends – whether with ThorSport or another team – remains to be seen. But if that’s the case and the Daytona road course turns out to be the only race he misses, NASCAR will be put in a precarious position when it comes to the playoffs. Currently, despite missing a race, Enfinger sits seventh in the championship standings and would likely end up in position to qualify for the playoffs on points, if not wins at some point this year.

In order to qualify for the playoffs, a driver must have at least attempted to run every race on the current schedule, but that hasn’t always been the case. In the past, NASCAR has most commonly given a playoff waiver to a driver who’s been forced to sit out due to an injury, something that makes logical sense since we certainly don’t want a driver racing hurt. But the sanctioning body opened a Pandora’s box of interpretation when it handed down a one-race penalty to Johnny Sauter in 2019, only to turn around and grant a playoff waiver.

When it comes down to it, Enfinger reiterated multiple times how grateful he was to be able to race at Las Vegas even though Eckes was in the No. 98

“I’d like to say thank you again to Codie for letting me do that and for Duke and Rhonda to be cool with that; I appreciate that as well,” he said. “I think some owners would frown upon that, but man, Duke has been stand up about everything and we’ve been on the up and up the whole way through this process. I can’t say thank you enough to everybody involved to let us do that.”