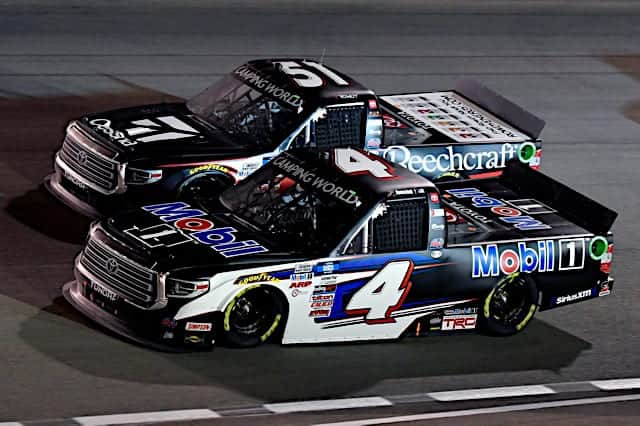 “For sure,” Nemechek told Frontstretch this week.

“I can’t disclose that information,” Nemechek said matter of factly.

Click here for video of the full interview with Nemechek

“Laps are everything, experience is everything,” said Nemechek. “Being able to kind of hone in on different experiences and learning from those and trying to soak up information like a sponge. I think that anyone would say when you go to Cup, ‘I wish I would have known’ or in life, right?”

After years of KBM reloading its driver roster with inexperienced teenagers and seeing continued diminishing returns, the Toyota team changed course at the end of 2020.

In a move that surprised some, Nemechek was tapped to drive the No. 4 truck.

“[Busch] said that he kind of wanted a veteran guy to come in,” Nemechek said. “Even though I feel like I’m still a kid at [age] 23. … [It was] something that I didn’t feel like I could pass up.”

Why would Nemechek give up a Cup ride and step down two series levels?

For one, Nemechek doesn’t get wrapped up in prestige.

“I’m not one to just be in the Cup Series to say that I’m a Cup Series regular and a Cup Series driver,” Nemechek said. “That’s not who I am. I don’t really care about the title. More or less, I want to win races, I want to be known as a winner and as a champion. And I felt like this was my best opportunity to do so at this time.”

For the previous two years, Nemechek hadn’t been winning. In his 2019 NASCAR Xfinity Series season with GMS Racing, Nemechek had six top fives and a best finish of second (Las Vegas Motor Speedway). In 2020, driving Front Row Motorsports’s No. 38, he peaked with two eighth-place finishes, both coming at Talladega Superspeedway.

While it may have been a surprise for Busch and Nemechek to pair up, the foundation had been put in place over the years.

“I feel like I grew up around Kyle in a sense,” Nemechek said. “I was always racing Late Models. He was racing Late Models, and then racing him in the Truck Series and the Xfinity Series. He made his first Xfinity start with my dad [in 2004] back when I was a little kid. So I feel like we’ve always kind of been around each other in a sense. …

“I feel like [our relationship] kind of took off over the last year or so. And just being able to ask [Busch] questions and talk to him about different things. And especially on the Cup side last year, I felt like for myself, it was very beneficial for me to pick his brain a little bit. … But it is definitely neat to kind of continue that on, have him as our friend, as a boss and kind of as a mentor and an advisor now.”

Even the Toyota aspect of Nemechek’s new gig isn’t new to him.

During the first two years he competed in the Truck Series, 2013-14, Nemechek’s family-owned team fielded Toyotas and received information from KBM. When NEMCO Motorsports switched to Chevrolets, they received chassis built by KBM.

But this is the first time Nemechek has competed in NASCAR with the level of manufacturer commitment that KBM enjoys with Toyota.

“Toyota is really good about kind of giving you what you need to succeed and being able to kind of push you to be better, always striving for more, always wanting to win races,” Nemechek said. “I feel like they are really caring about all three series, for sure. From the Truck Series, the Xfinity Series and the Cup Series, they value every series kind of the same, and they want to win no matter what, that’s all they’re about.”

And there’s the possibility Nemechek won’t be in the Bristol race. He and his wife, Taylor, are expecting their first child together.

While they’re “hoping” the baby will come before then, Nemechek said if the baby decides to come on time, he’d “for sure” be with his wife.

“I think that also depends on timing,” Nemechek said. “If she has our baby early in the morning, then I’ll still be there for the night race. But depending on timing and how everything works out, I think it’s kind of circumstantial.”