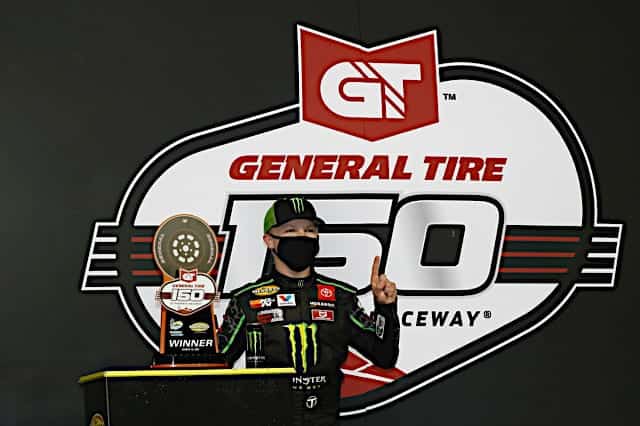 The win marks Gibbs’ second in NASCAR this year, as he won in his NASCAR Xfinity Series debut at the Daytona International Speedway road course in February.

Gibbs fended off his fellow competitors on a green-white final restart to win. The No. 18 had the speed all day at Phoenix, posting the fastest time in the lone practice session and getting awarded the pole when qualifying was canceled due to inclement weather.

“Not a lot of kids get to do what I do so I’m very thankful for that driving race cars,” Gibbs told MAVTV in victory lane. “Thank you to Pristine Auction, Monster Energy, those guys have supported me so much, especially this race. It’s nice to come here and win this one. We’ve kind of lost the last two so it’s good to come and win. I love Phoenix, Phoenix is a great track, but the job’s not done yet; we got to go win tomorrow”

Thad Moffitt earned his career-best finish with a third-place finish. Moffitt told media members post-race he will compete in the majority of this season again, currently shy of funding for a full-time effort.

Kyle Sieg scored his career-best finish of fourth place, joining the two ARCA winners this season – Heim and Gibbs – as the three drivers to score top five finishes in both races thus far this season.

A byproduct of this combination ARCA race, the lone ARCA combination race with the West series, was 30 drivers started this race at the 1-mile track in Avondale, AZ.

On the first lap, trouble resulted in four drivers with wrecked cars and an exit to their respective races. Gracie Trotter washed up the track and collected Zane Smith. Both Jack Wood, who will now run the full season it was confirmed earlier this week, and Toni Breidinger were involved too.

Smith and Trotter both shared differing views on the accident.

“These short days in the ARCA series at Phoenix has really been the story for the past few years,” Zane Smith told MAVTV. “It’s always something. I don’t know what else I could’ve done there. I feel like I got cleaned out.” Smith then confirmed he will compete in a few more ARCA races this year in addition to his full-time schedule in the Truck Series.

For Trotter, it was her second straight DNF in her first year competing primarily in the main ARCA series. She chalked it up to a racing incident.

What happened from @gracietrotter11's point of view

Taylor Gray led the field to the competition caution at lap 76, halfway through this race. However, he received a two-lap penalty when his David Gilliland Racing team pitted his No. 17 Ford for tires and fuel simultaneously, a violation of ARCA rules. Gray rebounded to finish one lap down in ninth place.

On lap 120, full-time rookie Nick Sanchez, who was running third at the time, slammed hard into the wall.

His No. 2 Chevrolet was destroyed, and he left fumed at Mark Lowery, who made his ARCA debut.

Unfortunate night for @Nicksanchez080 driver of the No. 2 @Max_Siegel @chevrolet – “Having a great race until we got caught up in an incident passing lap traffic. Hope it’s just the beginning to a good season ahead.” @ARCA_Racing #GeneralTire150 pic.twitter.com/Mtg0O1DlNa

The ARCA Menards Series returns to the track on April 24 at Talladega Superspeedway for the General Tire 200.

Only a spoiled rich kid with unlimited racing funds would do an obnoxious burn out like that and then beat on his chest. It’s like in your face to the small, struggling, underfunded teams that make up ARCA. I’m sure the Lord was proud of Ty.
Shame on Bob Dillner for glorifying it.

Larry D
Reply to  Tom B

I agree. I had posted a comment on his win before you did but it was not included for some odd reason. I must have stepped on the wrong toes, heaven forbid. But the comment I made then was that if the future ARCA races are going to be like this with the Joe Gibbs Cup/ARCA experimental team for grandson, Ty, there is no use for me to watch them anymore.

I subscribe to NBC Sports Gold specifically for these races but I am allowed to cancel at any time. I plan to do that now. This most recent ARCA race was B-O-R-I-N-G!!