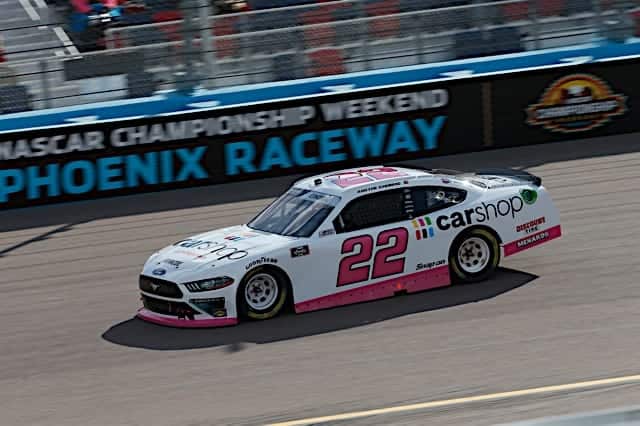 Cindric won the race after leading 119 laps and avoiding all the chaos on the two-lap shootout. Ty Gibbs, Brandon Brown, Riley Herbst and AJ Allmendinger rounded out the top five.

“Look, it’s data points, you have to work hard the rest of the year to get here, so that’s where my focus is,” Cindric told FOX Sports after the race. “I got my name on the wall right there and the goal is to be back with the shot to do it again.”

Cindric had to battle with Justin Allgaier on the final restart, though Allgaier himself was one of several who made contact with the wall in the final two circuits.

“I think it was definitely a role reversal from the last time here,” Cindric said. “[Allgaier] obviously got a really great restart and stuck it top of [turn] 3 there. Just fighting for track position and [I] came away with the win with the CarShop Ford Mustang. Awesome to have them on board for this season and get the pink and white colors in victory lane.”

Allgaier ended up in eighth place after tagging the wall at the end. Jeb Burton and Bayley Currey were sixth and seventh, while Brett Moffitt and Jeremy Clements took the ninth and 10th positions.

The race was laden with cautions for incidents. As stage one ended, Jesse Little lost his brakes and crashed in turn 1, ending his day.

Cindric, who won the first stage, lost several spots on pit road during this break while Daniel Hemric took the lead coming off pit lane. Soon after the restart, the caution came back out for Dexter Bean after he spun around near the inside wall in turn 3. He was able to keep racing, though, and everyone got set for the next restart.

Then Noah Gragson’s bad luck continued as smoke started coming out the rear of his car on the lap 63 restart. The yellow flag waved a few laps later when fire appeared underneath Gragson’s No. 9 car of JR Motorsports, sending him behind the wall and out of the race.

Fellow JRM pilot Michael Annett also had to go to the garage due to an engine problem.

Hemric kept the lead after the restart and held on to win stage two while his Joe Gibbs Racing teammate Brandon Jones overcame an earlier speeding penalty to get the final stage point.

However, Allgaier and Cindric had good stops and came out of pit road before Hemric. Harrison Burton had a longer stop after coming into his box sideways.

Allgaier held the lead for several laps, but Cindric closed in and passed him just before the caution came back out for Tommy Joe Martins.

Ryan Sieg restarted in the front while most of the field pitted but quickly dropped back, allowing Cindric to retake the lead. Then on lap 132, the caution flag waved once again for Harrison Burton who spun rather harmlessly after getting loose.

Cautions breed cautions, as they say. On lap 140, Brett Moffitt attempted to clear another car and spun around.

Jones shot out to the lead on the next restart before Cindric retook the lead a couple of laps later. Then, Josh Berry suffered a flat tire after Santino Ferrucci raced him up toward the wall. As Berry came back down, Blaine Perkins made contact with Berry’s left rear which caused the tire to go down.

Berry quickly spun around and made heavy contact with the wall, ending his afternoon. He was very displeased with Ferrucci’s actions.

Later on, Allmendinger made slight contact with Jones as the No. 19 Toyota came across the racetrack. As a result, Jones spun and smacked the inside wall hard, retiring him from the race.

As the laps wound down, Cindric would maintain control even though a caution for a wrecked Alex Labbe threw a wrench into the action. While Hemric, Justin Haley and Allgaier all slipped up into the wall, Cindric held his line for the green-white-checkered finish to take his second win of the 2021 NXS season.

The Xfinity Series heads back east to Atlanta Motor Speedway for the EchoPark 250. Coverage begins on March 20 at 5 p.m. ET on FOX Sports 1 and PRN Radio.