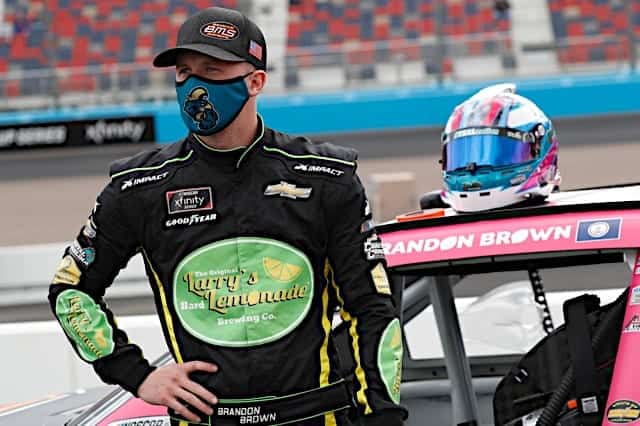 Runs like Saturday afternoon at Phoenix Raceway in the Call 811 Before You Dig 200 should go a long way toward that.

Brown, who had just one top-five finish in his NASCAR Xfinity Series career coming into Saturday, suddenly found himself near the front as the field came toward the checkered flag at Phoenix. There, in the midst of big names and better-funded teams like race-winner Austin Cindric, Justin Allgaier and Ty Gibbs, respectively from the Team Penske, JR Motorsports and Joe Gibbs Racing stables, was Brown threading the needle through multiple cars to post his career-best finish of third.

“To be 100% honest, I didn’t really know what to envision,” Brown said during his post-race Zoom conference. “Kind of being on the bottom, especially here at Phoenix where it fans out so far, you can go way below the yellow line going into turns 1 and 2, control your own fate down there.

“People that weren’t able to hold the bottom kind of caused a big incident, and we were able to pounce on it. Envisioning third? I don’t know, but I was looking at the leader thinking, ‘Man, it would be great to get up there.’ ”

Chaos on the restart and it comes up @AustinCindric once again! Special shout-out to @brandonbrown_68 (3rd) and Texan @BayleyCurrey (7th) for career best finishes! pic.twitter.com/6KEu35tmiq

Brown’s strong finish was hardly a fluke. It’s his third top-10 finish in five races. Not including Homestead-Miami Speedway, where he dropped out due to the No. 68 overheating, he has finished no worse than 11th in any of the other races this season.

It’s what Brown wants to be the norm. Brown is building on his efforts from last season when he posted six top 10s and a top-five, finishing 11th in the standings.

No dig at JRM at all, reads bad out of context. Just excited. Was stating we are parked with them they know who we are on multiple weekends. We want to be as competitive of an organization as they are! I have the utmost respect for @JRMotorsports and all their guys! https://t.co/DpDNNnIe0n