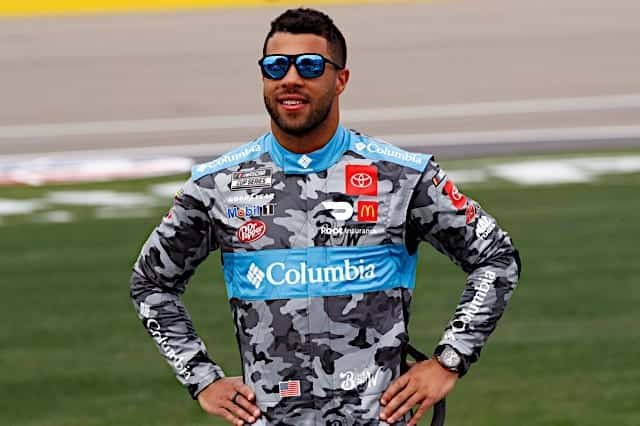 It’s time for NASCAR Cup Series drivers to race in the desert as the sport’s west coast swing heads to Phoenix Raceway out in Arizona. The Instacart 500 airs on Sunday, March 14 at 3:30 p.m. ET on FOX.

This race last year was the final “normal” one, as COVID-19 quickly spread throughout the country, changing life as we knew it. Unlike 2020, though there won’t be any practice or qualifying. In fact, the lineup was set by a performance metrics formula, putting Brad Keselowski on the pole.

This track is a one-mile tri-oval with a unique shape and minimal banking. Teams will use the higher horsepower package with the smaller spoiler, a handling setup that’s typically produced more passing and movement throughout the field.

Since Phoenix is a flatter track, you could look at Richmond Raceway’s and New Hampshire Motor Speedway’s track histories to see which drivers excelled at these places. Last year, Keselowski dominated at both facilities.

However, Phoenix’s shape is very different from those courses, even featuring a dogleg where many cars fan out to try to make passes. Also keep in mind the current package was used in 2020 with very different results here. In the spring, Joey Logano came out ahead in a competitive race with plenty of lead changes. Last November? Chase Elliott led the way in an event dominated (sometimes sleepily) by the Championship 4 and track position. Which direction you think it heads this time will make the difference when it comes to cashing in.

Before I move on to my picks for Phoenix, let’s see the results from last week’s race at Las Vegas Motor Speedway.

Finally, a great lineup, thanks to Kyle Larson winning after leading 103 laps. Also, Christopher Bell gained nine positions to end in seventh, which also produced a good score for his salary. Ross Chastain missed the mark, but it didn’t hurt this roster too much.

This lineup easily cashed the large $1 single-entry double up and earned $3 in the giant $1 Happy Hour.

For this race, you will want some dominators who will lead laps as well as a few drivers who can finish several spots ahead of where they begin. It’s very rare for a driver not to lead over 100 laps at Phoenix. It’s happened just once in the past six races (last spring).

I’m starting off with the 2020 Cup champion, who took the title after leading 153 laps. He was on the pole, but multiple inspection failures dropped him to the rear.

That made his dominant performance that much more impressive. Elliott also led 93 laps in the spring event before ending the afternoon in seventh. Additionally, he recorded 113 total fastest laps across both events.

The No. 9 Hendrick Motorsports Chevrolet pilot has had decent speed so far this year. He notched 19 quickest laps last week at Las Vegas Motor Speedway and 20 fast laps at the Daytona International Speedway road course. However, circumstances haven’t gone his way yet, keeping him out of victory lane.

First, Elliott just missed out on winning his first Daytona 500, winding up second. Then, a caution for a slightly wet racetrack set him behind on the road course. While attempting to drive back through the field, he got off track twice. Last week, Elliott couldn’t get out of his pit box smoothly after sliding his tires, which put him back in traffic on the restart. He spun around and finished 13th after leading 22 laps.

I think Elliott’s luck will change on Sunday, as he is just too good of a driver with this package to not have a good finish.

Logano won this Phoenix event in 2020 after leading 60 circuits, the lone race of the past six events in which no driver completely dominated. However, with no practice or qualifying, we may start to see the cream rise to the top, and that group includes Logano.

The driver of the No. 22 Team Penske Ford led 125 laps in the 2020 championship race but ended in third, just behind his teammate Keselowski. Still, it was a very good run for Logano, who added on 47 fastest laps. He also led 93 laps in the fall 2019 race en route to a ninth-place finish.

This time, he’ll roll off ninth and could find his way to the front, a trend that’s happened plenty in 2021. At the Daytona road course, Logano nearly won the race after leading 10 circuits; he’s led laps in every race so far this year.

The Team Penske driver has yet to cash in on victory lane despite that early season strength. But although he doesn’t quite have the results to show for it, expect the veteran to be a strong contender this week.

Reddick’s trek to the desert last spring did not end well, as he suffered the same fate (wrecking out) that his cohort Austin Dillon had several laps prior. However, he had a very fast car before that and was running in the top 15 for much of the event before a flat tire sent him into the wall.

Although he only has one good result so far this season (a second at Homestead-Miami Speedway), Reddick should right the ship Sunday. Last year at Richmond, another flat track, he drove his No. 8 Richard Childress Racing Chevrolet to 11th place after starting 22nd. He also was 10th at NHMS.

Reddick starts 23rd this week and can add position differential bonus points to your DraftKings score if he makes a lot of passes on track. Don’t expect a sophomore slump here.

Wallace is another driver who hasn’t had good results, as his highest finish so far was the Daytona 500, where he ended 17th. But this time, he’s starting 25th and can quickly make up spots using the dogleg. If his 23XI Racing team can find a good amount of speed to help him get to the front of the field, it would greatly benefit your DraftKings lineup.

Last year at Phoenix, Wallace gained eight positions in each race to finish 19th in the spring and 15th in the fall. Those were very good results for the No. 43 Richard Petty Motorsports team at the time.

Bubba’s current team has an alliance with Joe Gibbs Racing, which has also shown speed in the desert. Look for Wallace to meet his DraftKings value and earn his second top 20 of the year.

I really don’t know why DraftKings keeps Buescher at this price, but you really need to take advantage of it. It’s tremendous value for a guy who’s had two top 15s and three top 20s to start out the season. Last week, he started 18th and ended 14th, which was enough for 33 fantasy points on DraftKings. The week prior, he led 57 laps and added 39 fastest laps before finishing 19th. I’ve really been impressed with Roush Fenway Racing’s speed this season, and I’m not backing away from the team just yet.

Buescher also did fairly well at Phoenix last season, obtaining six and 11 spots to end 17th in the spring and 20th in the fall. That’s really all you need from a driver at this salary. Though he’s starting 17th this week, the consistency Buescher’s shown thus far shows that he should keep up these strong runs.

Speaking of consistency, here we have Suarez, who I feel is extremely undervalued. He has two top 20s already this year, at the Daytona road course and at Homestead, with a team that wasn’t even in existence in 2020. The potential for a great result is there, especially since his Trackhouse Racing group has ties with RCR. He’ll start 27th Sunday and should pass some cars if the No. 99 Chevrolet can find the right setup.

Though he didn’t do as well last year at Phoenix, Suarez still gained 10 positions to finish 21st for Gaunt Brothers Racing. That’s quite an accomplishment for an underfunded team he struggled with throughout much of the year. Also, he ended 15th in the fall 2019 race and earned two top 10s in the spring 2017 and 2018 events.

If you need value to fit top-tier drivers, Suarez is a good option.